Platinum Arts Sandbox Free 3D Game Maker is a free open source 3D Game Maker, world creator and 3D Game Design program currently being used in many schools throughout the world that allows kids and adults to create their own video games, worlds, levels, adventures and quests, even cooperatively! The goal is to make it accessible to kids but also powerful enough for full game projects. With a simple click and roll of a mouse wheel users can modify the world however they want. In the words of a nine year old Sandbox whiz I babysit for, “Press Edit and go fulfill your dreams!”. Now features new game modes such as sidescroller, machinima, kartmode, RPG, and more! 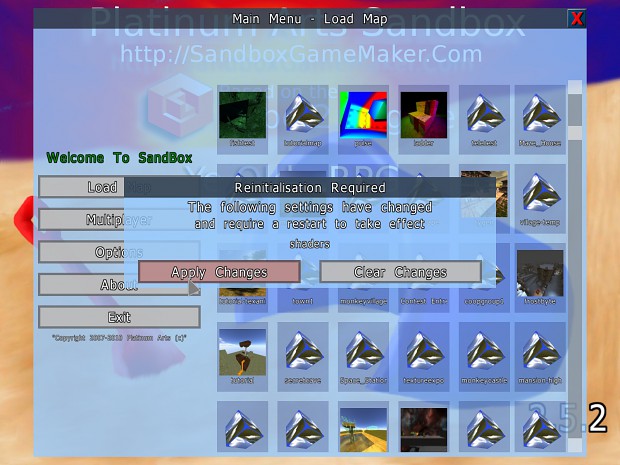 There's been a new UI system in sandbox for a year or so now. The system in question was developed for another cube 2 based game.
We were given this UI system a year ago, but we didn't know how to use it so the code just stagnated. You would not believe how buggy it was either.
graphitemaster (GASP!) got it compiling again, and since we've been spending our time figuring it out. We even got it documented on our wiki! Sandboxgamemaker.com

This image is the result of what we've (mostly me :P) learned over the past few days. And it is also what SVN users will see (without the applychanges dialogue) if they compile their clients with -DNEWGUI (see the wiki).

As a final note, the created interfaces can also serve as a HUD (We sort of disabled this functionality though), which is why it's called new UI instead of new GUI