Pay what you want, use your brain cells, strategically arrange planets to trigger chain-reactions and loot plenty of gold in this addictive, action-packed puzzle-game for PC & Mac! All proceedings of this game will go right into the development of our space pirate game 'Pirates of New Horizons'!

Pay what you want for this PC & Mac title, bust planets and support the development of our space pirates game "Pirates of New Horizons"!

Planet Buster is a puzzle game set in the universe of "Pirates of New Horizons" - a world of pirates and science-fiction created by indie start-up Exit Strategy Entertainment. All proceedings from this game will benefit the development of our Action Adventure! The main character is the space pirate girl "Annha" who travels the void and visits distant planets on her search for precious treasures. In Planet Buster Annha dreams of gold and the stars after a long night of stargazing through the telescope on her ship...

Have you ever played a match-3 puzzle game before? No? Don't worry, you will figure out how to play the game in no time. If you have played a game in this genre before, you might be interested to hear some of the things that Planet Buster does differently from other match-3 titles:

You can swap any tiles! 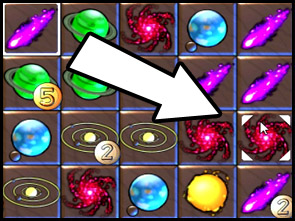 In Planet Buster you are not restricted to swap only adjacent tiles that make up groups of three. You can strategically arrange tiles to trigger long chain-reactions and earn higher rewards. This allows for deeper strategic playing.

Each move comes at a (virtual) price! 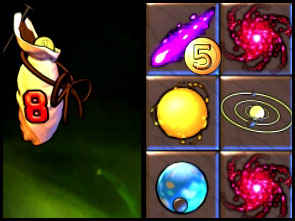 Before you start planning to arrange long rows of tiles, consider that you are playing against the clock and each move comes at a (virtual) price: one coin. You can recollect coins by blowing up tiles they are attached to, but on the other hand the bigger your chain-reactions are, the more coins will appear on the board!

You will need more firepower! 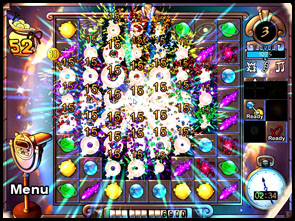 From time to time you will have different power-ups at your disposal that you can use to rack up more points or to save you from imminent failure/get you out of precarious situations.

Pay what you want!

At Exit Strategy we are all about fair deals. This is why instead of asking "how much do I have to pay?" you should be asking yourself "how much would I like to pay"?

All the proceedings of "Planet Buster" will go right into the development of our Action Adventure. It will help us to make the game better and get it into your hands sooner!

If you want to get a look at the environments we're working on for Pirates of New Horizons - here's your chance! We added fresh concept art as backgrounds to the stages in Planet Buster!

Thanks me hearties! :)
- Exit Strategy Entertainment

Thank you! :D A 3D Jump'n Run/Action Adventure is an undertaking not to be underestimated indeed. Instead of just taking pre-orders or starting a crowdsourcing project, we thought it might be nice to give something in return. :)