Games By Us | TBD

Pit Fighter Tycoon is a Tactical Deckbuilding RPG with Auto-Battler combat. You play as an Alien that abducts humans to build the ultimate gladiator team. You will surgically enhance your humans and then send them to die in the arena for profit!

A SPECTACLE OF VIOLENCE

You will need to build a team of deadly, surgically enhanced humans; carefully balancing their strengths and weaknesses. You will train them in combat or uncover their latent psychic powers.

Unrefined human are weak and squishy - so you will need to use your advanced alien technology to stuff them full of powerful new organs! Choose your best humans and turn them into monstrosities with additional hearts and lungs - or just rip an arm off and replace it with a better one.

The only thing that matters is profit - you're an entrepreneur after all! The money made from your humans can be re-invested in your spaceship, unlocking cruel new technologies to further enhance your humans. When your humans are of no further use, grind them down into goo for a tidy profit.

And just like that, 5 months flies between Development logs. Definitely overdue! A lot has changed for me recently; I’ve moved to the other side of the world, spent some time living in a van and I now have returned to full-time employment at a games company.

But the important thing is that development of Pit Fighter Tycoon has not stopped, and is still going on.

Going forward, development will need to happen after work and on the weekends. Unfortunately this means that a 2018 release date for Pit Fighter Tycoon is just not going to happen.

The last few months have been quite productive, as I’ve taken a look at how all the systems in the game interact - and found they didn’t do that well enough. The next few months are going to focus on really tying the existing systems together so work together as a whole.

So, what’s new in the game?

Changing how you Deal with Slaves

Previously, Pit Fighter Tycoon was a bit hands-off when it came to slave management. You assigned them to a trainer, watched them progress, sent them to fight and only ever really managed them closely when they were injured, or if you wanted to ‘upgrade’ them with new organs.

Now there is a mechanic for Fatigue. Slaves will get tired as they train for hours on end, needing time to rest before being sent into the arena. Subsequently, this new system requires careful management of their time. Adding this mechanic has also necessitated a complete overhaul of the Slave stats screen: 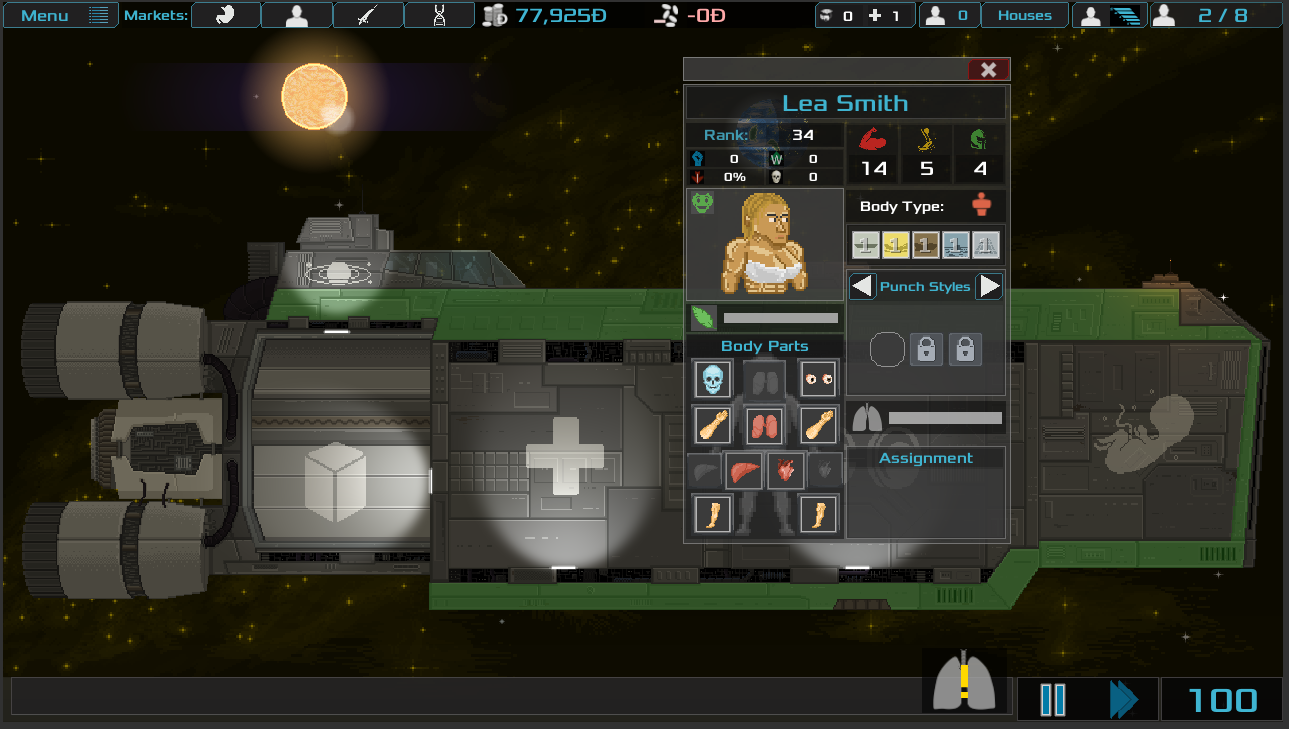 A Slave’s injuries act as a hard cap for the amount of fatigue your Slave can recover. A single injury could cap your slave at 95% performance - not too harsh a penalty. But a recently brutalised Slave may only be able to recover up to 10%, ensuring they will get fucked up again if sent back into the Arena before they can heal.

Injuries are now stored on individual organs, which is a huge mechanical change in the game. This means that a Slave’s heavily damaged organs can be swapped out with fresh ones. You could then use your shittier fighters as a ‘healing bags’ for damaged organs, while your prime slaves go back into the arena to earn you more credits. 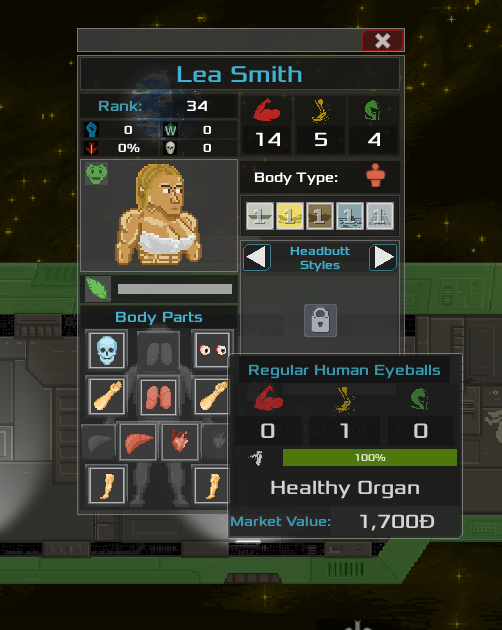 Another major change is that each injury inflicted on an organ will decrease its durability. Eventually the organs will wear out, and become ruined. This makes them more mechanically similar to equipment from an RPG, but it also fits better into the overall theme of humans being meatbags. 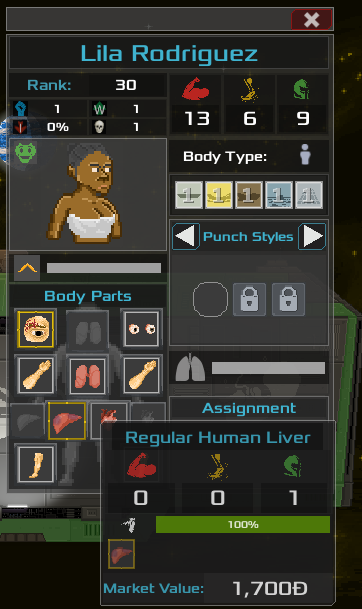 Training in the game requires the use of training pods and trainers. A trainer will monitor a room, which can contain 3 training pods, with 1 slave per pod. The terrain in each training room can be changed for a fee, but will give Slaves experience in fighting on that type of terrain. At the moment, there are 5 terrain types: Gravel, Sand, Mud, Water and a Steel-Grid.

The artwork is still work in progress, but here is a preview of how the training rooms will look: 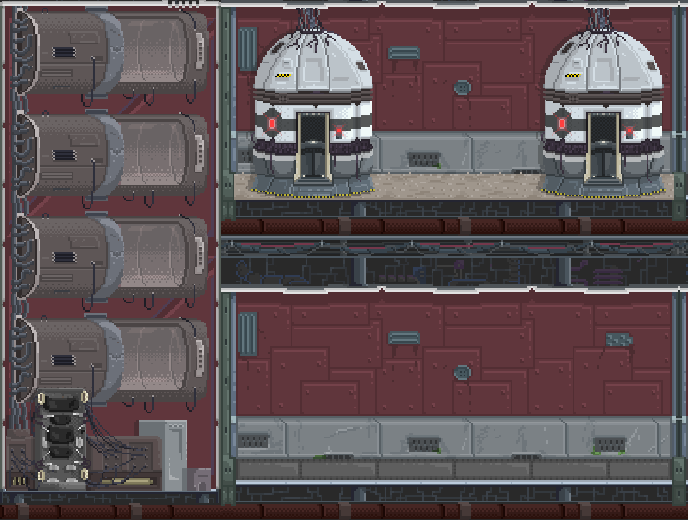 The process of making the art for this has been a long one. Stylistically it went through a couple of styles, which actually makes for a pretty cool GIF…

You can change the Fighting Style being taught in each room, with the Trainer’s individual skill deciding how quickly your Slave’s pick up the skill. Slaves can learn every fighting style in the game, but there are 5 levels in each style with each providing larger bonuses.

Each Fighting Style contains of a number of different attacks, with a new attack being unlocked at each level. Each attack will target different parts of an opponent, or could knock them down to the ground - letting you stomp them. Mechanically this is an awesome change, but I don’t have any artwork to show for it yet. But, the way that these Fighting Styles and Attacks are created in-game does allow for something really cool...

Groundwork for a Modding System

There’s now a system which will eventually allow for player created mods.

It’s a relatively simple system for ingesting them into the game, but it works. The groundwork is there, and it needs some refinement, but I am super excited to make the game moddable! I Have further plans to expand this down the line, so that you’ll be able to create all kinds of new features. I’ll talk about those when I actually figure out how to make it work.

That’s it for this DevLog! There are some major changes coming in the game, and I can’t wait to get them working and worth talking about.

Go behind the creation process for Drug vats in the game, and how they work in Unity. There's also now a Trello Board which you can follow development...

Lets talk about buying rival Slaver-Houses, making money from their work and getting fat from their profits!

This DevLog covers Capturing and then Ransoming (or taking ownership) of Slaves, along with some of the customization available for your very own Slaver-House...

Pit Fighter Tycoon has been Greenlit on Steam! To celebrate, I'm going to share some images & info about the horrific injuries your slaves can receive.