Mischievous Monkey Studios proudly announces the release of Philip Muwanga's Hexy Trench on XNA Community Games. Hexy trench (Hexy) is a multiplayer focused, tile placing, take on trench warfare. Combining intense strategy and puzzle elements together to create a unique gameplay experience. Players start with a single HQ tile and vie for control of a hexagonal based grid by placing randomly allocated trench tiles to form a trench system, before building offensives and defensive structures to wage war on their enemies and claim victory. 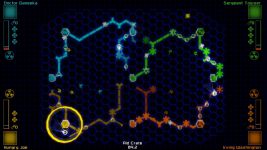 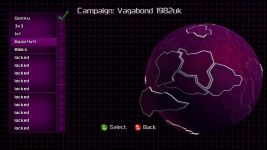 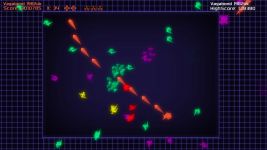 Battle is waged between 2 to 4 human or A.I players over a hexagonal grid. Each player starts with a HQ tile and can spend supplies to build a trench system by placing randomly allocated trench tiles to form a trench system. Players try to connect to outposts scattered over each map, as each outpost connected to their HQ will increase the rate at which player generates supplies.

Players can also spend supplies on offensive and defensive structures to fortify their trenches. They can build bunkers to launch assaults and machines-guns defend their trenches. Bunkers will spawn troops, known as Grunts, at regulate intervals. These Grunts will move forward in a straight line based on bunkers rotation. They will fearlessly charge onwards until they are killed, hit enemy trenches, or leave the map. If Grunts manage to get to enemy trench tile they will destroy it, while if enough Grunts manage to get to an enemy controlled outpost they will capture it for that players team. Machine-guns can be placed on trenches to counter enemy Grunts and will shoot any Grunts that are in range, protecting the trenches that are placed on. However machine-guns have a limited field of fire, so players need to be careful with their placement.

To get passed machine-guns players can build artillery, and use it to batter the enemy into submission. Once built, artillery will charge up and can be fired at any point on the map. Any trenches caught in the blast will be suppressed, temporarily disabling any structures on the tile. This is very useful against machine-guns as it will allow Grunts to get to the enemy trenches unmolested and destroy them. However artillery is wildly inaccurate so additional pieces of artillery can by built to increase the effectiveness of each barrage and guaranty hitting the target location.

In order to stop stalemates from happening devastation special weapons will drop on to the battlefield in the form of supply crates. These crates are collected by connect trenches to their location. They will then travel back through the player trenches to their HQ. Once a crate reaches a players HQ it will grant the player one of four special weapons ( Attack Helicopters, Air strikes, Orbital Lasers and Nukes) that can be used to tip the balance of the battle in the player's favour or to break deadlocks.

Each match of 'hexy' is a battle to the death with the last player standing wining. Players are knocked out of the game if enough enemy grunts manage to get to their HQ tile. Each time a the base its attacked the player will lose a life. Once three live are lost that player is defeated and their base self-destructs in a nuclear explosion. 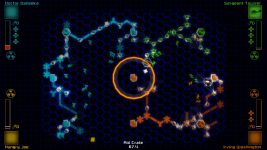 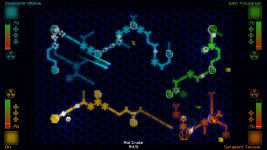 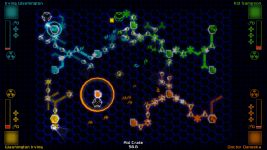 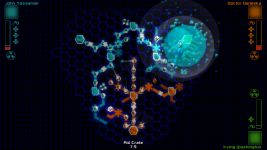 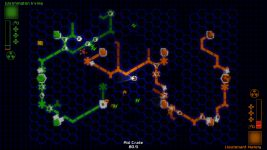 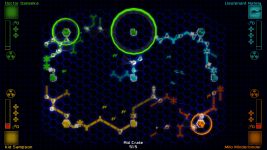 Thanks for voting and helping Philip Muwanga’s Hexy Trench on it's quest to become the 2020 Indie of the Year. You are now in with a chance to score some free games. Help this game secure more votes by embedding the widget (or link) we have included below on your favorite sites.

Until the Last Plane

After 8 months of development Mischievous Monkey studios in proud to announce the launch of Philip Muwanga’s ‘Hexy Trench’, on XNA Community Games for 200 Microsoft points. ‘Hexy Trench’ is a multiplayer focused, tile placing take on trench warfare, combining intense strategy and puzzle elements together to create a unique gameplay experience.
In ‘Hexy Trench’, Players begin with a single 'HQ' tile and vie for control of a hexagonal based grid by placing randomly allocated trench tiles to form a trench system. Players then build offensive and defensive structures on top of their trenches to wage war on their enemies, fighting for possession of resource generating 'Outposts', before launching assaults on their opponent's 'HQ' to claim victory.

So how did ‘hexy’ come about? Well like most games ideas it started as a flash of inspiration that occurred at four in the morning, while drunk, in Italy. In my inebriated state I began drunkenly pondering the nature of field marshal Haig’s detachment from the actual fighting taking place under his command in WW1. Instead of being on the front lines, commanders would sit in the safety of the command post, insulated from the terrors of war, drawing maps and saying which points of the enemies’ trench to attack. In my drunken state I knew that there was a game in there and begin writing down random notes. After sobering up the next morning and looking at my notes, I started write as design document base around the idea of trench warfare, but without players having direct control over their troops, instead simply instructing the placement of trenches and fortifications while but watching the battle from afar, and with that ‘hexy’ was born.

With the initial starting point in place, the design document was worked on while I finished development of the mod ‘Squad Commander'. (Jump to ModDB page) Ideas like the control fluid used as an analogue for manpower and militarily strength were added. Along with the rock, paper scissors mechanic provide by bunkers, machine guns and artillery. While ‘outposts' and collectable ‘special weapon' crates were added to spark conflict between players. The decision to have a simple, minimalistic art style was taken very early in development after the nightmare of modelling, rigging, texturing and animating 13 different characters for ‘squad commander', I wanted something more manageable. With the design document in place I had a clear idea what my next project was going to be after squad commander was finished.

With ‘hexy’ now finished all that left for me to do is say my ‘thank yous’ to everyone who helped make it possible. First off, my house mates, Will Miles, Chris Parry, and Mike Rigby, for giving me feedback, support and suggestions over the last 8 months. Next Richard Boon for helping me hammer out the initial design doc and play testing. And finally everyone involved with XNA Community for providing tutorials and guides on that really helped me understand XNA and for play testing and finding the last few bugs.

P.S All you PC gamers be sure to check back soon, as after my next XNA project (think ‘Micro Machines 2’, in space!) I’ll be porting Hexy to the PC.

With most of the Staff overseas exploring GDC and all its wonders, Dave is left to cover the site and bring you the Modcast with a new guest.

I hope there will eb a PC port.

This deserves a lot more man. You just kind of threw it on a barely noticed section of xbox live without getting much publicity. This game is great. There's nothing like it. It should ported to PC and put on steam, or at the very least a regular XBL/PSN game.

It could net you some serious cash.

They should really have a PC only filter on this site

... I saw this, looked at it and thought "That would be awesome!" Then I got to the end and realized it was only for Xbox... Time to put another good game on the back burner till it gets finished/ported...

Planning a PC release?
I don't really think Xbox is the right place for it,

Here some of the reviews that have come in so far for Hexy: