Hello there, fellow followers! It's been a few weeks again since we posted an update, and we thought it'd be nice for you guys to know what we were doing.

We have been working heavily on defining and tweaking how PAZE will look, and to find a good way to get the best possible visuals with the best possible performance. The entire scene is real-time (and running flawless), which means that once we finish a map and bake the lighting, we will get a good performance boost. 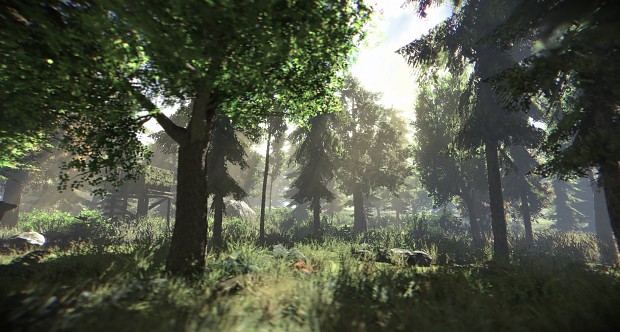 The environment has been created by Independentsoul (Postprocessing, Scene, Materials, Textures, Models) and me, Analdin (Textures, Models). It's still WIP though, as we are currently working on a street/path system, to ease creating the, well streets and paths ;). Also, the props, street meshes, houses, etc aren't in a presentable state yet, as we were focusing on the nature and foliage.

For those who want to read the technical side of it (and it is a lot of tech stuff you see in there ;) ), IndependentSoul is discussing that in his thread over at the UDK forums.

Our award-winning Composer and Sound Fx designer Kevin has crafted a main theme for PAZE, an Epic/Orchestral styled piece of art. Enjoy!

We are looking for talented people to join us!

OrangeCore is currently searching for people with experience in:

Visit our recruitment thread to view the requirements and the list of abilities that'll give you a bonus ;). Take care!

Help us to get to the top ranks of the Indie Game of the Year event, and take a look at our brand new character model!

PAZE - We're Back on Track!

You haven't heard from us for almost one year, and it's time to reveal what we were working on! There were quite a few changes that have been made to...

oh wow i wondered where this mod(indie game?) went. good to hear you guys are back!

Well, welcome to the new profile of PAZE (aka Sonic). Stay tuned, an update will follow up tomorrow!

will the weapon be included?

That depends on which weapons you mean. If you're asking for some FLAKs or heavy miniguns, i'm afraid i'll have to disappoint you. But we'll include some epic assault rifles, submachine guns, shotguns, pistols and some neat "weapons" that help the players to communicate with theor teammates!

Also, we're going to have a big comeback soon, so stay tuned, guys! We're not dead!