Let's just say I'm not very fond of the patent system. My way of dealing: making Patent Blaster, a sidescrolling explodey kind of game based on awful patent art come to life. Your mission: invalidate those patents using any means necessary.

Elephants charge at you with a stick of color acting like a lightsaber, before falling to your superior flamethrower, but not before they’re resurrected and your cackling evil twin erupts on the scene, literally flying in all directions, just above the hovering hollow bear with a freeze ray. I love games in which each second of gameplay can be described as thus; it’s delightfully ridiculous.
Chris Priestman, Indie Statik

...strange, juicy, and fun... The visual style of this game is unique.
Indie Game Hunt

Around this time two years ago, I was working on a simple Java 2D game engine with swappable rendering implementations. It occurred to me that I needed to make a simple game to try it out and find its flaws in real-world use. Then I stumbled on Context-Free Patent Art, a wonderful collection of bad and creepy patent drawing. I decided to base my test game on bad patent art, and Patent Blaster was born. 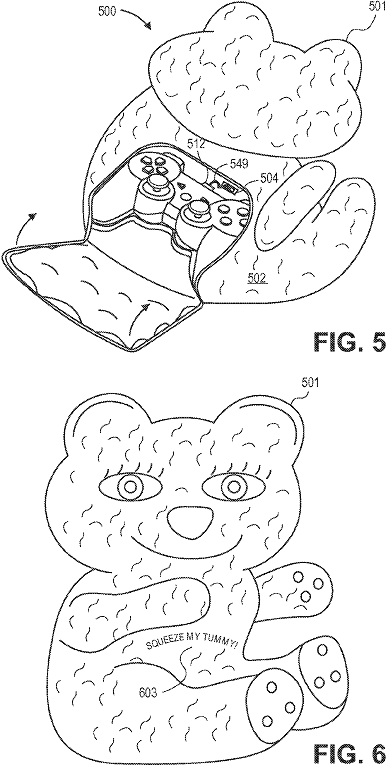 It was the first game I would try to sell online, and it was an utter commercial failure, but it occupies a spot in my heart, and I still play it regularly. It’s a weird and satisfying game that’s I find perfect for when I just want to spend five minutes making things go boom.

The game's art style is intentionally awful. I initially wanted to use real patent drawings, but could never figure out if they were copyrightable, so I settled for re-drawing a dozen of my favorite weird ones in a similarly naive style. The game would give those drawings garish colours while the background consisted of a creepy run-down house with ugly wallpaper.

While it’s ostensibly about patents, in terms of gameplay the game is really about randomization. Enemies can hop, hover, fly, explode, be on fire, splort out small versions of themselves, come back as zombies, absorb each other to gain powers, steal your stuff, turn into new enemies upon death and every combination of these things. You can have a giant orange hovering duck shouting "Yes! Yes! Yes!" while occasionally emitting smaller ducks that turn into acid-spitting zombies upon death.

Weapons are equally varied. They can be more or less accurate, fast, and ranged. They can be bullets, homing missiles, swords, flamethrowers, sticky blobs. There’s an elemental damage system with six types: steel that can penetrate through multiple enemies in a row, fire that can set them aflame, ice that freezes them, acid that leaves drips and pools behind, curses that slow and weaken, and blessings that strengthen anything they don’t outright kill. Equipment names get sourced from Wikipedia to generate the occasional bit of weirdness, like "The Marshal of Finland: Eating flesh gives you 10% of the victim’s HP".

As stated above, the game was quite a failure commercially. It took maybe three months of full-time work to develop and sold a total of, uh, maybe ten copies? Weirdly, I was relatively successful with PR: at one point it had more reviews than sales. At another point, I had genuinely made more money from finding cash on the ground while looking for playtesters than I had from selling the game. In the end, the game’s weirdness and intentionally awful looks really did not click with people, and there were lots of more polished side-scrolling shooters for them to play instead.

Still, it was a genuinely useful experience to go through the whole cycle of releasing, selling, and marketing a game. If you’re an aspiring indie developer, I highly recommend you get this kind of experience as soon as possible. It helped me avoid a lot of pitfalls with Airships: Conquer the Skies, which is doing rather better than ten copies sold!

I am fond of this weird little game. If you want to try it out, it’s free on itch.io these days, the result of a sequence of events that made it easier for me to give it away than to continue charging for it.

Patent Blaster is 80% off this week

To celebrate the IndieDB announcement of my next game, Space Exploration: Serpens Sector, Patent Blaster is 80% off this week - $1 instead of $5.

I've been hard at work at the House Update, introducing shelves of musty old books, torches, tasteless china dogs, and many more weapons.

And Then There Were None... Platformer