Parkitect is a business simulation game where you must build a successful theme park.

Build the theme park of your dreams, and keep it running! Meticulously design that newest roller coaster, place the rides where you want them to be, and construct scenic structures and objects to make the park beautiful. Let your creativity shine, and when you're finished share it with the world! 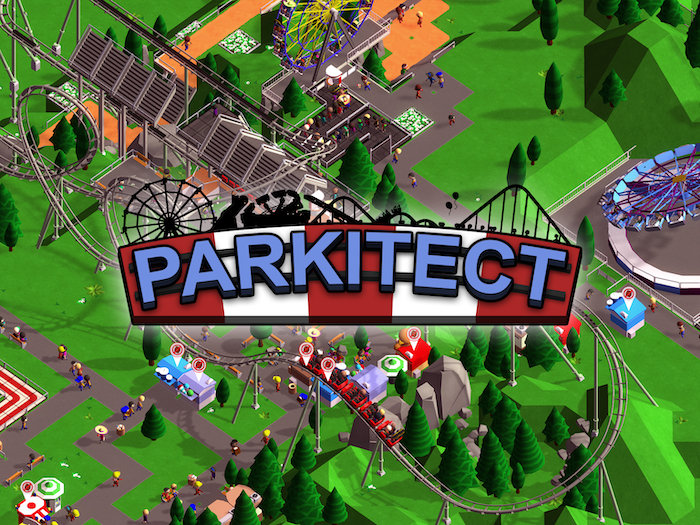 First off I want to say a big thanks to the guys at Texel Raptor for letting me have a sneaky peek at the full release of Parkitect a couple of days early. The game left Early Access and reached version 1.0 full release on 29th November.

One of the games I sank hours into as a kid was Theme Park on the Amiga 1200. For a few years there was nothing, then in 1999 a coverdisk from a magazine was passed round the playground at school containing a demo for a new theme park management game RollerCoaster Tycoon. That demo contained only about 20 minutes of gameplay with the first scenario but I was immediately hooked once more, going into my local games store to check their magical binder behind the counter with all of the release dates regularly. Over the following 6 years the game saw two expansions, followed by 2 sequels each with their own 2 expansion. And then...? Nothing, nada, silence for over 10 years. Finally our patience was rewarded with not 1 or 2 but 3 new theme park management games announced. A successor to RCT with RollerCoaster Tycoon World from Atari, a new franchise called Coaster Park Tycoon, which would later be renamed Planet Coaster, by Frontier Developments, who developed both the expansions to RCT2 and RCT3 and it's expansions, and Parkitect by indie outfit Texel Raptor. 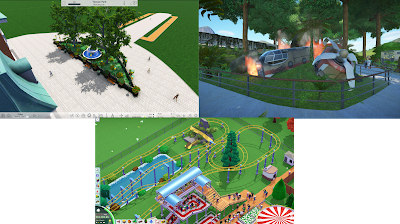 These games all approached the genre in different ways. Planet Coaster would follow a path that very much felt like they were building on the foundation of their knowledge and experience of RCT3. RCTW had a pretty muddy development being bounced between a number of developers, delayed and was plagued by a number of issues relating to performance and features that players felt were missing, particularly things like no longer being able to set the entry and exit points of rides or colour them as wished. Parkitect went back to an isometric grid based system reminiscent of the first two installments of the RCT series.

All of these games used an early access model through phases of their development to get player feedback. This phase started for Parkitect in September 2015 when Kickstarter backers were given access to alpha builds, with Planet Coaster and RCTW following in March of 2016. Parkitect then entered into Steam Early Access in May of 2016 opening up the game to a wider audience. The early access model has a generally bad reputation with games not being completed or released in a poor state, but Texel Raptor have shown the way to do Early Access. They have committed to a schedule of a monthly update and have kept players involved and engaged throughout the process. 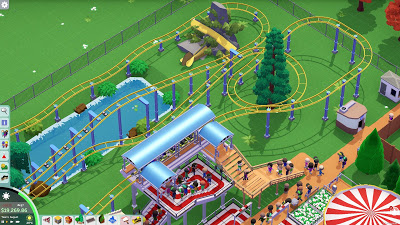 Each of these updates has built on the game with systems being added or improved, such as a new lighting engine and a rework of how scenery affects guests, and steady stream of new rides. Having owned the game for most of the time it has been in Early Access I would say that the biggest improvement I've seen in this 1.0 version is a massive boost to performance and stability, although admittedly I don't have a huge amount of game time and have missed a few updates. The big thing being added into this 1.0 version though is the campaign. This takes you through 26 scenarios in which you will hone your skills to become a true parkitect. As seems to be the way these days, when you start the campaign you open up a map rather than a list of scenarios, similar to the county map in Two Point Hospital and what looks to be the route Parkasuarus will also go down. Initially you can only see a tutorial park and the first scenario Maple Meadows set in "a large clearing on the frontiers of a maple forest" (see what they did there?) As you complete scenarios the clouds will clear, revealing more of the map and allowing you to progress. As expected, these scenarios will challenge you to make a certain amount of money or have a set number of guests in your park, for a 'bonus' there are additional challenges such as doing it within a set time period. Sometimes these additional objectives will give your park a financial boost.

Campaign screen before (L) and after (R) completing the first scenario

Before jumping in though I would recommend completing the short tutorial. This is accessed as the first scenario on the campaign map (but can be ignored if you don't want to). For players of RCT2 much of this will be familiar with a simple grid system and easy to understand UI, however this game does bring some new stuff to the table. The biggest change is related to your staff and shops. In Parkitect your shop stock will arrive at you delivery centre near the park entrance. The stock must now be transported to the shops by haulers. Whilst you can just allow them to roam through the park with the crates, this will affect the happiness of your guests as it will break their immersion. Shops can be stocked from behind so you will want to build a network of staff only paths. Thankfully this is a specific path type within the game so you don't need to rely on no entry signs to block off areas of your park. For shops which are further afield you can either develop a network of underground paths, but it will take a while for your stock to be delivered, or set up a tube delivery network. This allows the stock to be transported to a depot at the other side of the park, but are quite expensive. As with the crates of stock, guests don't want to see your depots or staff pathways. You can conceal these with a combination of scenery and fences, or even by enclosing them completely in a building.

The coaster builder is also very familiar, looking and feeling very similar to that of RCT. The main difference here is that you can now change the length of a section. This will provide longer straights, smoother transitions through inclines or banking and is how you alter the radius of any curves. This can also be a source of frustration and difficulty however. While you are getting used to the way the builder operates you are likely to find yourself coming back up to the station and not being able to line up your tracks. This is as different lengths of incline will result in you arriving at different heights. This has led to entire coasters being scrapped and started over, but is something I am starting to learn how to use better. My other frustration with the coaster builder is that you can't build backwards from the station. I would often find myself in the past placing my brakes, or last few sections of track out of the station to help me with lining up, but again is something that you get used to with time. One of my favourite things about the coaster builder though is that not only will it auto tunnel into the terrain, but it will also generate a tunnel for the coaster to run through, rather than just carving into the dirt as happens in other games. 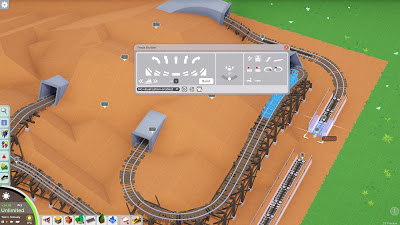 I've mentioned that the campaign is only being added in this 1.0 update, so what have people been doing for the past 3 years? Up until now the game has had a sandbox mode and a scenario editor. Personally I would say that the sandbox is more a custom mode. In this mode you can play on one of the base sandbox terrains of flat, hills, lake and river or you can also play any of the campaign maps which you have successfully completed. You are also able to enable/disable the financial, research and objective aspects of the game. If you disable all of these this will give you complete creative freedom, with no financial constraints and all in-game items available from the start. This has allowed players to create some fantastic looking parks, really showing off the aesthetics of the game. 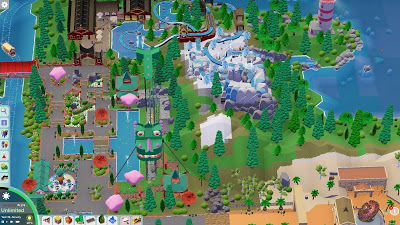 Era of Exploration park used with permission of Ryan Mooyman from All About Parkitect group.
Park file can be downloaded here

The Steam Workshop is one point where this game has really stood out from the crowd. Whilst Planet Coaster has recently released their Theme Makers Toolkit allowing player to import 3D models, Parkitect has had a modding community from very early on. With the included scenario editor, players have been able to create their own objective based scenario maps and share these with the community via the Steam Workshop, at the time of writing there were almost 300 additional player created scenarios. Players have been able to share not only ride and scenery blueprints, but also other types of mod. These range from scenery packs such as the Building Kit from Kenney which gives additional walls, roofs and building decorations to the CoasterCam by H-POPS allowing you to ride your own creations. You can also browse the Workshop whilst playing using the Steam overlay with subscribed items being seamlessly added to your game 'on-the-fly' without the need to restart the game. There is also a content manager in game which allows you to easily see what mods you have installed. 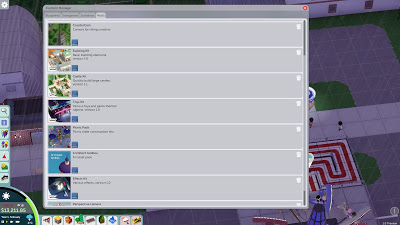 In-game content manager showing your currently subscribed mods,
you are also able to remove mods from this menu

I feel that I've barely scratched the surface of what is possible in the game but I am thoroughly enjoying the campaign and have had more fun I've had with this game in the past 24 hours than I have had in the past two years. It takes the foundation set in the RCT series and really pushes it forward. If you are looking for something to scratch you theme park management itch and Planet Coaster and RCTW haven't been doing it for you then I would say that Parkitect is the game for you! It is available to purchase now on Steam priced at $29.99/€24.99/£23.79 and you can join the community on Discord.

If you have enjoyed reading please consider supporting me on Ko-fi.

You can also view my other content at Parcivalplays.co.uk

Another Brick in the Mall Realistic Sim