Lemniscate is an eerie adventure game set on a spaceship in an expansive sci-fi universe. Your character wakes up to find that his eyes have been replaced with a machine. Using his new vision, he has to find out what's going on and save himself from the inevitable.

There's one catch: When you fail, the day restarts, and the environment changes depending on what you achieved on the previous day. You'll have to find the right combination of events to escape the loop.

The game is being developed by two people in Unreal 4, using only free software.

For further info, visit our blog

The project has been Greenlit, thank you for everyone who voted!

One integral part of Lemniscate is using items. For example: the player needs a crowbar to get into the air vents, and a screwdriver to open a fuse box. 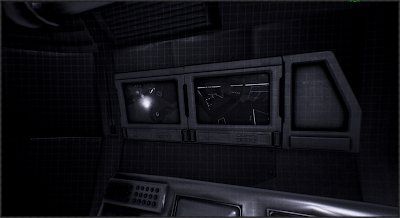 Another usable item will be related to surveillance cameras. There are several surveillance cameras on the ship in every room. From the story's viewpoint, this is because the transport company that owns the ship requires the overseer of the ship to keep the ship's crew under constant surveillance. The overseer has a portable device for this purpose - a gadget that is connected to every camera on the ship. In-game, this is a very valuable item for the player, because it lets him look into any room he wants, anywhere he is. He can time his actions according to what happens in different parts of the ship. Obviously this item will be hard to get, and its location will vary depending on how things went during previous days.

In addition to these, we're working on various events for Lemniscate. These events will happen when certain actions are executed by the player - for example, if he changes the destination's coordinates on the ship, it will go off course and steer into meteoroids that destroy a part of it. If the player survives, he'll hear the sirens and see the alerts on every screen while the whole ship freezes and he slowly dies.

Because of this structure of gameplay, we're not basing advancement on experience points, like in RPGs. Lemniscate will be like an adventure, there will be no good or bad answers to a question, only different roads to an ending. Destroying the ship may mean revealing crucial information about the story or characters - it's not "game over".

The disadvantage is that once the player finishes the game, replaying it won't be as much of a challenge. Because of this, we're planning to include multiple endings depending on playtime and choices.

We are trying to create a story with believable characters that is one of a kind. The player will decide if he wants to listen to the story, find out more, or just play the game and ignore the hidden details.
The ship's crew will drive the story forward - not through dialogue or encounters but through the recorded notes in their PADs (Personal Assistant Device). They all had their PADs with them when the time anomaly began, so the entries will change along with the player's actions.

We're writing a lot of text, developing the visuals and thinking about the story in-depth for Lemniscate to be relatable and atmospheric. We have a lot of assets to create before we achieve the look we're aiming for - a home for a whole crew of people that have been living there for more than a decade. We hope we hit the mark and players will find the experience enjoyable.

A post about an alternate dimension in Lemniscate, and the design choices behind it.

The Deadly Tower of Monsters Adventure