We are a group of highly-skilled IT programmers, graphic designers and architects able to lead teams in big companies and provide best solutions to every project - but that's during office hours. At home we are a bunch of hardcore gamers playing almost everything that reacts to mouse, keyboard or pads.
Now, united under Space Boat Studios we would like to present you Out of reach - the project that we are completely devoted to since the beginning of 2014 and which has the potential to provide everything that other similar productions can't!

As gamers like you, we want to pay once and enjoy a game for as long as possible. That's why every idea we come up with is set to prolong the experience and avoid monotony. Here are the main points that describe our project best:

No AI or storyline can replace competing or cooperating with other real-life players so we want to create a constantly changing, varied environment available for dozens of gamers playing together in the same place at the same time.

As we establish connection between players through our servers, we put our main emphasis to protect them against cheaters and abusers that already ruined several of really promising titles. As we keep full control of the game and constantly upgrade the code, you can be sure to start your journey at the same point as others and have the same chances to rule the islands as all survivors!

Freedom of choices and lack of obstacles is what makes MMO-games great. In Out of reach you begin the journey as a castaway on one of the archipelago's island with worn-out shorts and sand in mouth - the rest is up to you. Apart from surviving in the wild you will need to explore the land of plains, deserts, caves and rainforests looking for food, shelter and fire. Decide whether to stay, build a home and make nature your servant or try to escape by boat to other, more friendly islands with different weather and environmental conditions. 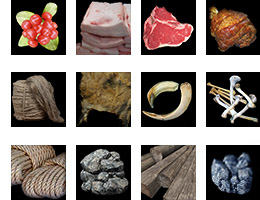 One of several functions that we wanted to include from the very beginning was a nice and neat-looking, intuitive character interface, which would be just cool to use. Variety of items of different size and usage, real-life view of characters wearing every sort of armour, player statistics determined by gear - these are the things that we love to see in games since the first RPGs and these are the things that are already implemented in Out of reach. 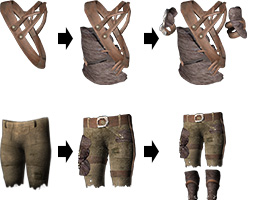 Another big part of the character customisation and search for builds that suit players needs best are crafting and upgrading facilities. Basically every part of equipment must be firstly crafted to be then upgraded in different ways in order to improve its stats. To do so, players will have to find or build a proper workshop, which could be used only with the right ingredients and resources. All these actions make the road to obtain the best gear really bumpy but very satisfying at the end.

If that's not enough, we currently make efforts to develop an achievement system to make gameplay even more rewarding and diverse. It's going to be fully based on the actions undertaken by the player. How good of a lumberjack, miner, hunter or assassin you are, depends only on the amount of personal devotion you commit to the task. Developing a character in specific areas allows players to use new skills - both active like 'charge' (that can completely change the style of fighting) and passive like 'trapper' which greatly improves the way one moves in the wild.

One of the most advanced features of Out of reach is our intuitive and easy to learn building system. Having gathered necessary resources such as wood, stone or flax you become able to build in just a few clicks a small shelter with bonfire for the night or a great, multi-storey stronghold along with defensive structures, a variety of workshops and separate rooms for your group. 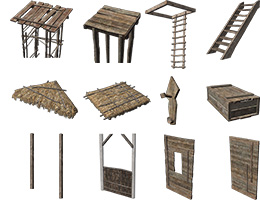 Trying to put up with wild animals in changing environment, constantly looking for supplies and a better place to stay overnight is already hard. Doing so with other castaways in the neighbourhood is even harder. Making bad decisions and enemies can result in being hunted down even behind thick walls.
A five-level stronghold with bay windows, watch towers and double gates are great against scavengers and barbarians but what about war machines? 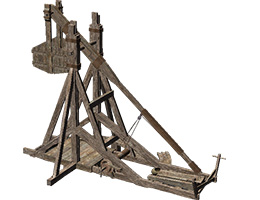 In Out of reach we give you an opportunity to construct fully-interactive and upgradable siege engines such as trebuchets, ballistae, battering rams or siege towers! Every single part of such constructions must be firstly put together in a war zone, loaded, aimed properly, drawn and fired.
Being combined with melee and range weapons, the ability to build structures with both defensive and offensive features makes every single battle a challenge and an event to remember! 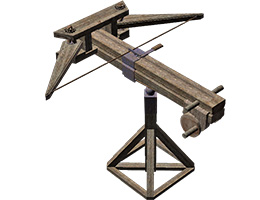 And now, dear reader, when we've drawn your attention enough to reach this point, we would like to invite you to check out our project on Steam.

For even more information about Out of Reach make sure to visit our home page Oorgame.com and of course follow on Facebook! ;) 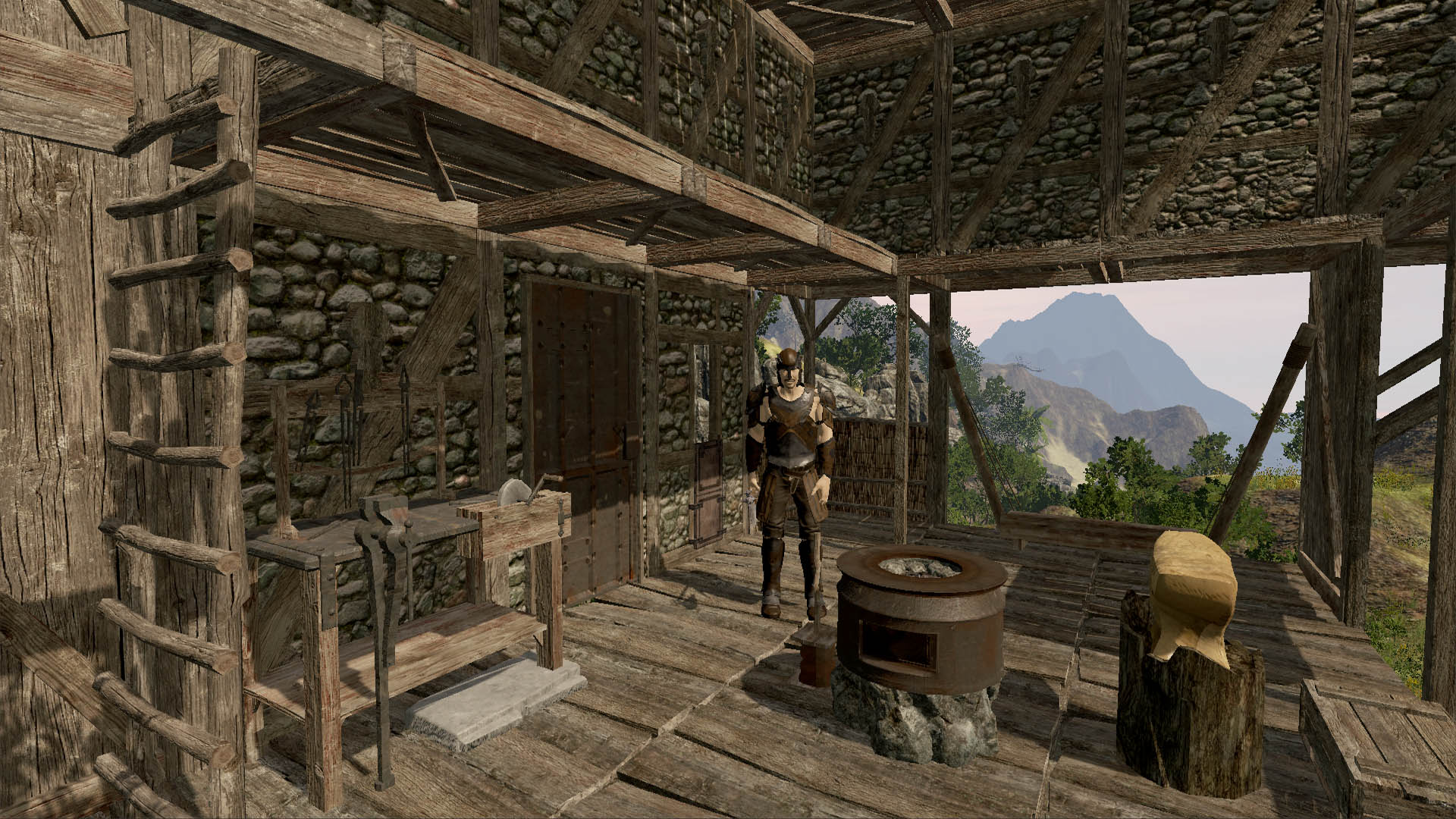 Hi guys!
it’s high time to sum up the last days of development before changelogs reach more than 40 fixes and improvements:) Here are the highlights:

Some of you may already know this one but it hasn’t been officially announced yet. The new armor is currently the most durable one on the archipelago, but also the heaviest. Works best in situations when resistance to damage is more important than speed of withdrawn. As shown below - comes in several levels:

Since many players were not satisfied with the durability of bronze doors, we’ve sped up the development of another tier of constructions. In this patch you get Stone jamb and Steel door to feel a bit safer out there.

We’ve also decided to let you catch a glimpse of mechanics so raiding and defending is easy to understand. Doors don’t have health points, they have a 'chance to destroy' and it looks like this:

Average amount of hits needed to destroy wooden/bronze/steel doors based on chance percentage:

More building elements including a new type of resource and completely new way to mine it should be ready in the upcoming updates!

The new workshop will be needed to craft certain gear made of bronze and steel. It’s a step forward to more realistic gameplay, makes the list of objects in „Player workshop” shorter, looks good next to furnaces and anvils and makes players do some more effort to get the best gear - simply the perfect piece of furniture:)

Stone furnace got an upgrade. A small part of its receipts is now moved to the new one. It will be also required to get that new resource that we’ve already mentioned but haven’t announcement yet.

Thanks to our players we’ve put first translations into the game. Right now you can find other languages in general options and choose which one you prefer. If you would like to help us in translations or you just saw something completely out of context please join our team and make Out of Reach better:
Crowdin.com

A few things to know about current state of translations:

- Player's character doesn't drown, get hungry or rest while player waits on loading screen
- Dead player's corpses appear dead also to those who entered the server after someone died but before respawned.
- Fixed issue with floor segments being hard to remove. In addition:
* Floor segments need only 2 support points (e.g. 2 poles or one wall)
* Floor segment does not provide any support points to another floor
* Triangle-shaped straw roofs are removed together with adjacent roofs
- Reduced weight of ballista's projectile by 1,5
- New Builder's desks must be placed not higher than on the 7th floor
- All Builder's desks on every server modes decay after 5 real time days if not used.
- Cancel button (default: Esc) can be bound to other key
- Map button can be bound to other key
- Use button is used also when gathering (not only E key but also the one chosen by player)
- Quick use/equip button can be bound to other key
- Salvage option does not appear in container context menu anymore
- Full inventory does not prevent player from pillaging and destroying buildings
- "Full inventory" warning when exiting glider or unmooring a boat (actions that give resources back)
- /c and /C commands work the same in the chat window
- Building over boats is possible only if new building elements are more than 2.5m above the boat
- % symbol added to armour stats in the Character's window
- New! Steel doors and Increased durability of Bronze doors by 25%. Average amount of hits needed to destroy wooden/bronze/steel doors based on chance percentage:
* Chipped Stone 200/1400/3000
* Stone Axe 33/233/500
* Bone Axe 25/175/375
* Bronze Axe 20/140/300
* Steel Axe 14/100/214
- New! Stone door jamb
- New! Furnace II - can be upgraded from the standard Furnace. Need to be built in order to smelt steel or bake additional food.
- New! Smithy table - workshop required to craft bronze and steel equipment
- Improved building panel - new skin and tabs
- Improved various sounds including animals and walking in armour
- Position of UI windows is now saved and loads automatically
- /clearWindowsPosition command - sets position of all UI windows to default values (type in chat)
- Trebuchet does not require additional upgrades anymore
- Blocked possibility to break through walls with character's head which could be used to destroy e.g. walled Builder's desks
- Increased time to gather previously fired arrows by 15s
- Improved physics of rocks being destroyed
- Additional, basic information in main menu about server rules before each connection
- Achievements' descriptions changed and improved

- First iteration of additional languages!
* Find them in Options > General > Language
* Help improve translations at: Crowdin.com
* Not finished translations display percentage of translated lines
* Not translated lines return to English
* Special characters and Cyrillic alphabet fallback to standard font
* All the translations are made by players, feel free to give us feedback

The 0.9.4 version is finally released! After several weeks of hard work on our survival game we are glad to show you some completely new features! Take...

Hello guys, after another productive week we are happy to announce that Patch v0.9 is ready for download! We believe it will push Out of Reach in a whole...

Hello guys, next week next announcement. :) Most of you probably know the changes we’ve made in the past few days but we’ve also received feedback...

This game is awesome! My brother gifted me a copy, we've been playing for probably 2 months. It's AMAZING. You get the occasional griefer but they dont stay around long. Still tho. AMAZING GAME.
- HG

interesting! would love to play it

Just purchased, thanks for supporting the site!

Is there a 3rd person view option, if so, Sold!

Hey, I just made a First Look of this game if anyone is interested.
Here's the link: Youtube.com

If this game is still in production please email me as I'd love to hear more about it.

Tags
Embed Buttons
Link to Out of Reach by selecting a button and using the embed code provided more...