OTOT is a 2D platform game combining action, exploration and strategy. You control a tiny character who has to survive against terrible enemies. Fortunately, you have an armed mecha allowing you to overcome the worst obstacles. The mecha is central to the gameplay. It is composed of several modules (weapons, engine, ...) that you can control individually. Given the complexity to control the mecha, the game will feature a co-op mode allowing players to share the tasks between them. But playing solo will also be possible due to an AI which will help the player to control the mecha. OTOT is developped by Bogon Games, which is not a company but an entity composed by two passionate French.

OTOT - DevLog #3 : A grappling hook in the game

OTOT - DevLog #3 : A grappling hook in the game

Before talking about the grappling hook that will be present in OTOT, I would just remind you that our game is still in early development. Of course we have a global idea of the game that we want to create, but some precise aspects are still foggy. That's why we are currently working hard on the design of the game. Nevertheless, we think it's interessant to share with you the development progress of the project. You should just be aware that some elements you will see in our DevLogs could be potentially changed in the future (and if it happens, be sure that we will explain why). I think it was important to precise the situation ;). 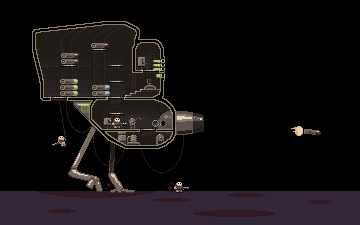 So why a grappling hook in OTOT ? As you may have read in the presentation of the game, the mecha is central to the game design. On the first mecha design imaginated by Uubu, the mecha entrance was in the air, and we quickly needed a way to allow the player to easily leave and come back into the mecha. . We thought that the player could instruct the mecha to crouch, but the idea of the grappling hook seemed more funny. It also adds a lot of possibilities for the character movements.

As you can see in the previous DevLog, one of our reference for the grappling hook is Bionic Commando, but I personally wanted something with much more flexibility, something like the ninja rope in Worms for example. 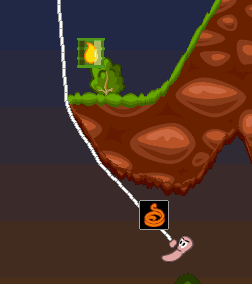 I created a rope using Unity physics and the result was pretty interesting. After modifying the implementation one or two times before, I ended with a relatively simple and efficient code (as a programmer, I still need to progress in terms of code refactoring).

Also, I encountered some difficulties with the physics collisions. I tinkered a lot the Unity physics settings because the rope sometimes passed through obstacles :x.

Sorry for the bad gif quality, I had not planned to show it at the time. However, you can already see the interesting physics of the rope. I added the ability to rewind and unwind the rope when the grappling hook is attached.

Let's finish this DevLog by showing you our actual result :

You can notice that the player can control the grappling hook direction.

There are some indications specific for the gif : green circle is for right mouse click (launch grapnel / rewind) and the black circle is for left click (unwind). I use the mouse wheel or jump to release the rope.

I think it’s a good place to say that all controls in OTOT are also thought to be compatible with controllers (I use the conventional Xbox 360 controller for my tests).

One last thing I can add is about the visual appearance of the rope. It’s just a not very suitable placeholder sprite for the moment. It will be changed.

I have more things to show about the grappling hook but it will be for future posts. I hope you enjoy this first overview. Do you already imagine your little character using his grappling hook to climb on huge mechas :D ?

A new concept art for the game OTOT, showing a mysterious level design.

OTOT is a 2D platform game combining action, exploration and strategy. And mechas, yeah there are huge mechas !