ONESTRIKE is a first person, asymmetric Virtual Reality experience where a HTC Vive player utilizes patience, concentration, and the ability to slow down time in order to defend against and take out four PC players roaming the shadows by striking them with a sword in order to win The PC players must devise a stealth operation to anticipate their targets actions and best strike the torso of the Vive player.

This was a very productive week for the ONESTRIKE team as we raced towards the finish line, squashing bugs and making fun, for the #MAKEITSUPERHOT contest. Further production for the ONESTRIKE title is planned for discussion after the contest due date on Feb. 26.

Kairos
Kairos, named after the Greek word meaning 'supreme moment', is the main weapon for the virtual reality player in ONESTRIKE. A player using the HTC Vive must wait for the perfect moment to draw Kairos from its sheath, and strike down as many foes in one strike. The Vive player is blind to much of the world around them, as light only illuminates the world within a few meters radius of the player's location. Using momentary bursts of echolocation to perceive the world beyond the light, and the ability to slow time, the Vive player must be patient and wait for foes to draw near. For detailed images, visit Noah's ArtStation.

Level Furnishing
Finalized the concept map and furnished with the warehouse props. 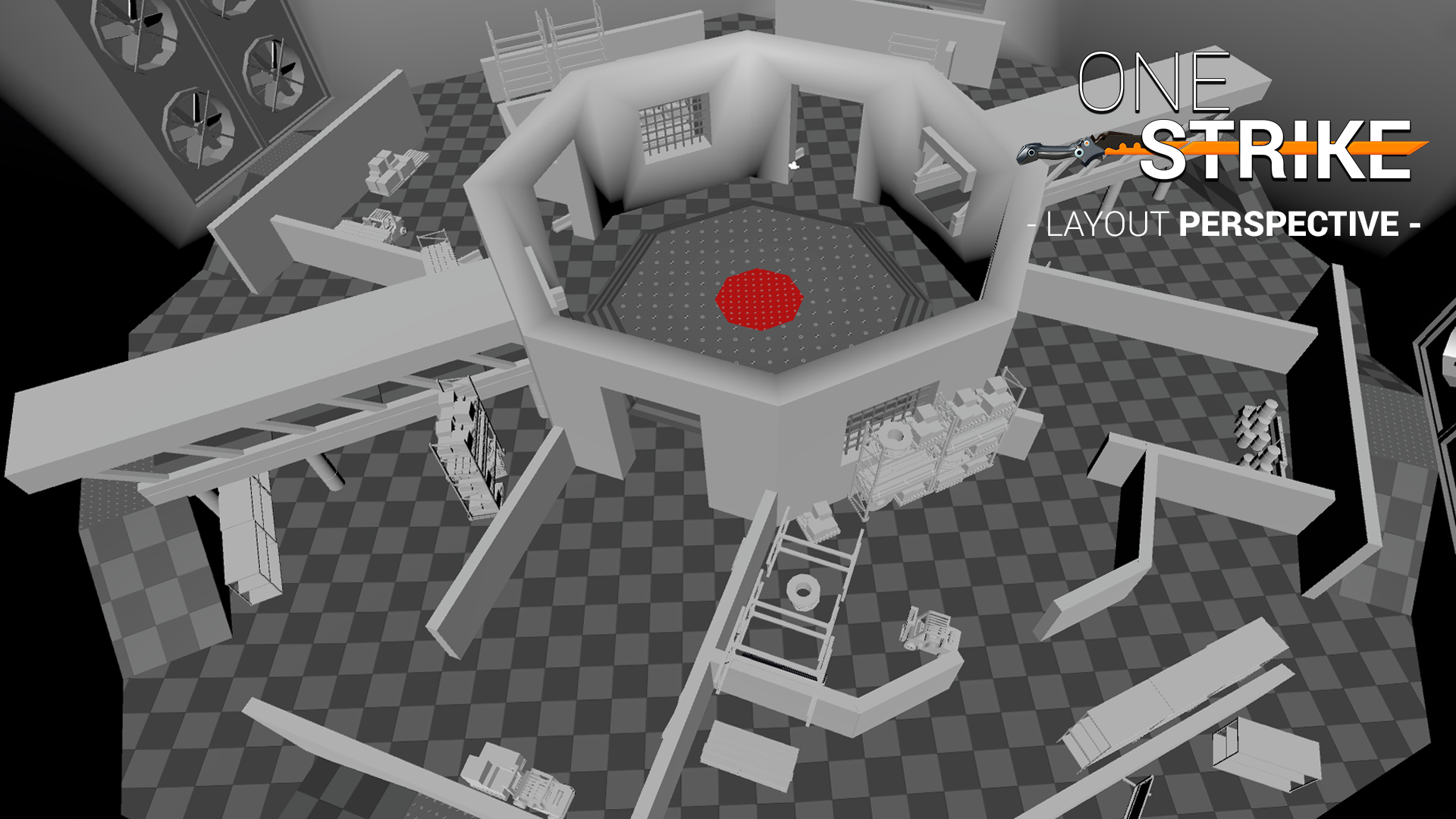 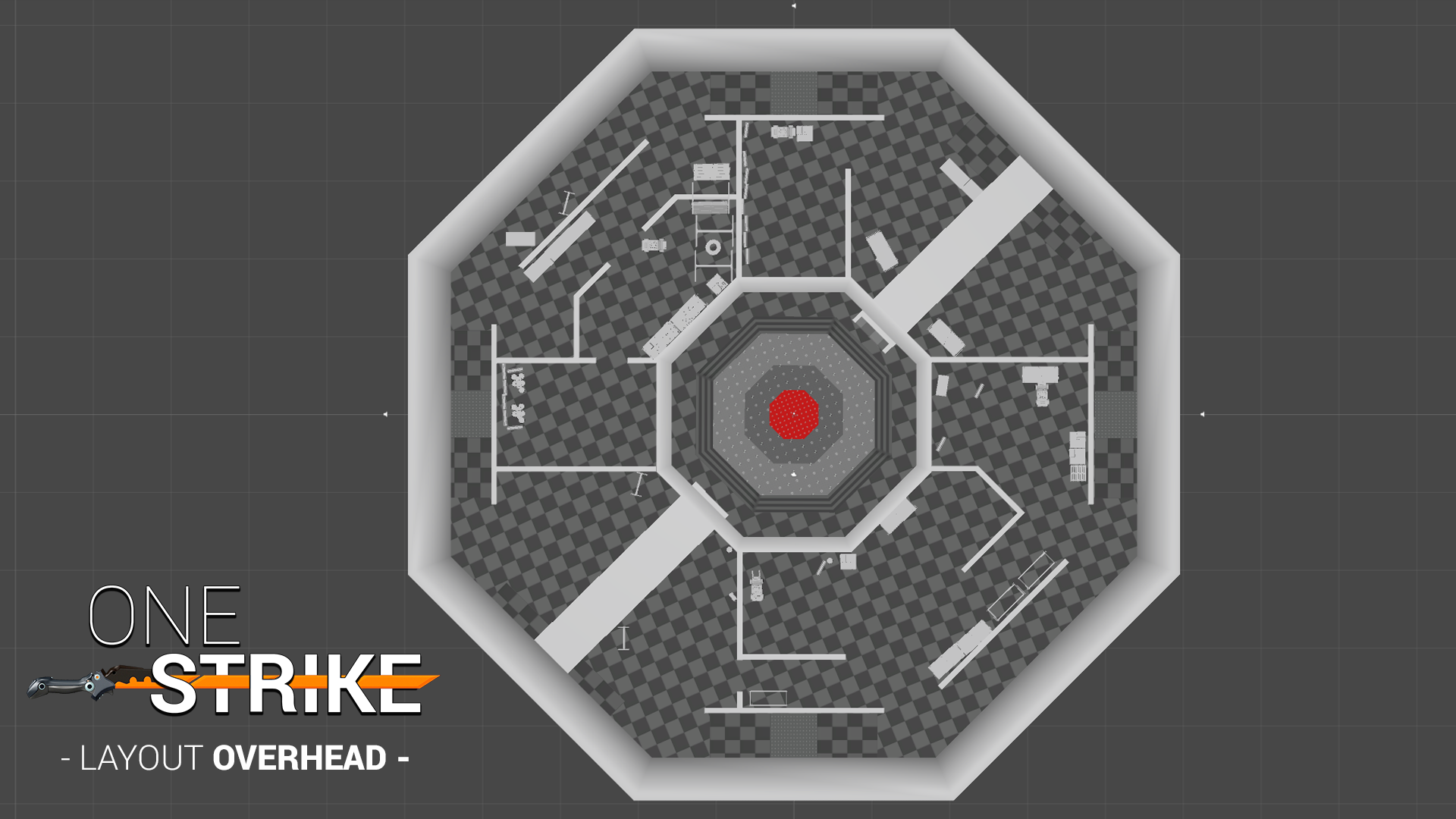 Multiplayer and Network Testing
With the map layout finished, it was time to test out the gameplay and make sure everything was running smoothly and was fun! Playing in 3D space was a blast and brought many new ideas for future development.

Exposure
ONESTRIKE is gaining a bit of a following! We were happy to see ONESTRIKE reach the level of interest it did on Indie and Mod DB domains. This helped lead to IndieDB tweeting one of our articles on Twitter, which we have around 340 followers. Now that the competition is coming to a close, we are going to work towards making not just a great VR game with more mechanics and features but also focusing on creating an engaged community. Follow us for up to date content postings! Facebook / Twitter / Instagram

From the Team
We look forward to whatever happens after the contest winners are picked. We know that our game has its kinks but there isn't a moment in playing and making this game that our team had anything less than a great time. Best of luck to everyone, our team from At World's End looks forward to seeing everyone's work and bringing you even more immersive VR experiences. Thank you for checking out ONESTRIKE! Please, feel free to message us here or send email to onestrikevr@gmail.com.

ONESTRIKE is a first person, asymmetric Virtual Reality experience where a HTC Vive player utilizes patience, concentration, and the ability to slow down...

Why does this game even need a global server? Couldn't you just use UDP & a master server for the server browser? :S

We are using Unet as it was the most straightforward for the competition. Unet only allows 20 concurrent users at a time if you aren't paying. We will be moving over to photon after competition for full release.

It sounds very very weird. I mean, why do you guys need to pay anyone and/or depend on other people's work? Just use something like lidgren(it's an api and nothing else) or any other api like that and code connections between players yourself(am not saying this directly to you, Corbin), it will then for example be easy to port the project from lidgren to steam api's networking, because all you do is call methods to send packets between pcs, you'll only need to change method names and initialization code.

I'm very weirded out by how some programmers work, i mean, i'm kinda just a code nazi when it comes to adding some big feature like physics, networking, maybe for example a terrain system. There's a 95% chance that i won't accept anyone's else MUDBLOOD CODE and write everything myself with only what .NET and driver dlls provide. ha.

Anyway, you don't have to listen to me, i'm just a random indie guy. c;
Goodluck with this, the game and your team's mood look promising, i really hope that you guys won't focus on VR stuff too much, and keyboard players won't be just VR player's entertainers, because this isn't just some "juggernaut" game mode, keyboard players don't switch places with the VR player from time to time.

Thanks for the suggestions and compliments!If you want a further explanation on Unet I'd take a look here: Unity3d.com
Docs.unity3d.com

In terms of our gameplay we will have a post up later this week or next describing what we plan to do with OneStrike on release. This was a test and proof of concept of asymmetric gameplay using the Vive and pc. We have loads of cool ideas about different game modes, mechanics,themes, and even pc player only mode we would like to explore. We are excited to share these ideas with the community, and get feedback from passionate people like yourself. We firmly believe that asymmetric games are the best way to keep vr and pc players to together, really evolve both mediums, and are possibly the most lucrative as it taps into both markets. We think its the future of games today. We also hope that IMGN.PRO recognizes this and helps us evolve the mediums together. Games like Onestrike that explore new waters are what we are all about with At World's End Studio.

Gl with Overheat, it was flipping awesome!