You are the captain of a space ship in a fictional alternate dimension/universe. Originally from Earth, you came across documents produced by a theoretical physicist, Monk James, that let you to complete an experiment that whisked you off to this new alternate dimension. 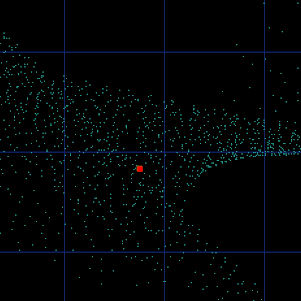 There are four maps used in the game, the planet map for when you land on a planet, the stellar map which would be the map of the current solar system you are in, the intergalactic map, which shows the layout of the 16 galaxies and this map, a galaxy map. The galaxy map contains several thousand stars as you can see. The red blip highlights where you are in the galaxy. Traveling to different solar systems allows you visit different planets, collect resources, engage in combat with other players, pirates and alien life forms.