Not Your Space is a fast-paced, highly-configurable Real Time Strategy game set in a unique sci-fi universe.

VERSION 3 of the public demo is now available, with more more and even a little bit more of the mores.

After a thousand years of space exploration, Humanity has finally arrived at the galactic core. But instead of a rich expanse of planets, we found an interstellar battleground, overrun by warring alien species. In order to survive, we must conquer! 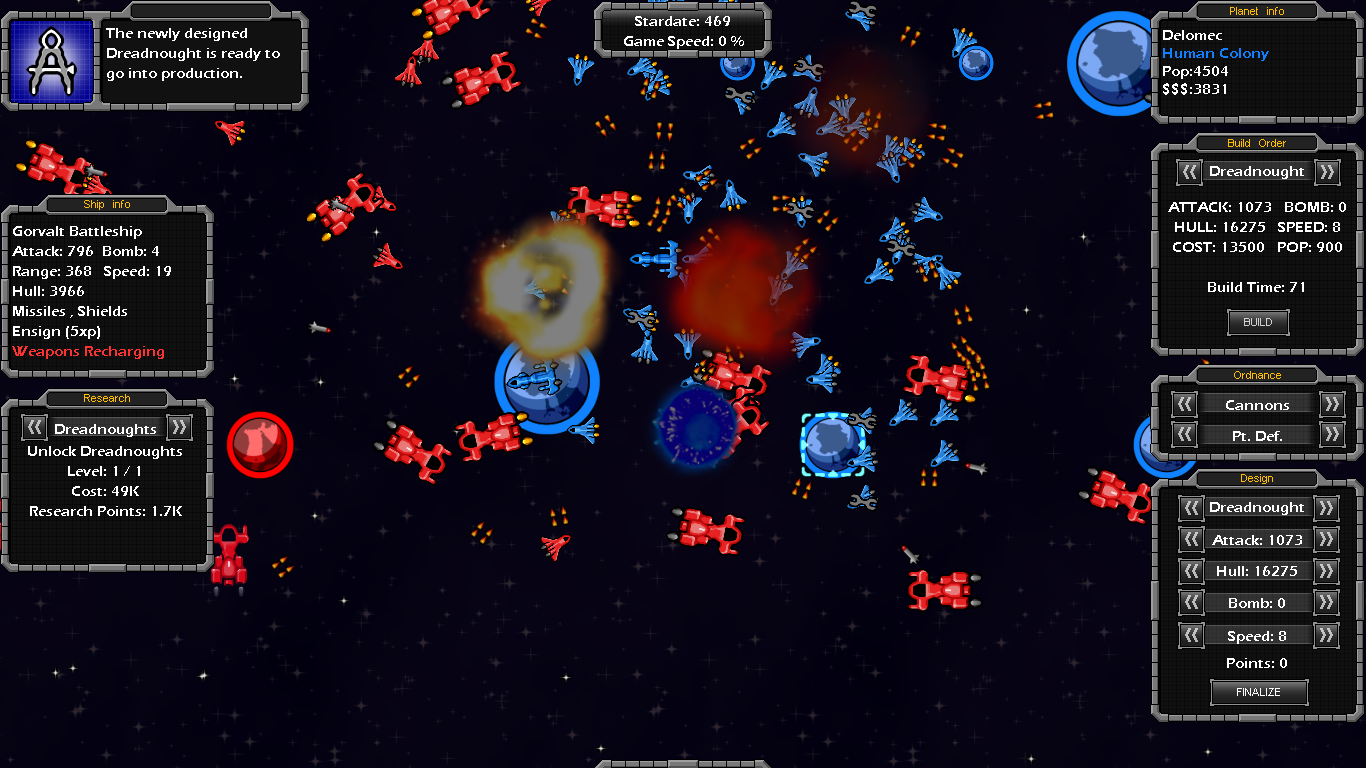 One of the key inspirations for NYS is the idea that some major systems can be turned on and off for each new game. These are things like resource gathering, diplomacy, research, etc. These systems are already working.

There is also a huge array of minor options, not all of which are listed here:

Another feature is that each of the 5 playable alien races in the game has their own strengths and weaknesses, so you need to approach each one differently. The Vuline have great defenses, but very slow population growth. The Mormood have a great economy, but very weak weapons. One of the new options give each race a favorite type of ship, which they can build at reduced cost, further differentiating their play-styles.

Here is a let's play of a 7-minute game with almost everything turned off:

In all likelihood, the Not Your Space Kickstarter will not succeed. I may discuss the reasons for this in a future post, but for now, I'll put it down to a lack of pre-campaign advertising, my value of substance and gameplay over "flash", and some big concurrent events in the gaming community (The launch of Fallout 4 and StarCraft 2 LotV on the SAME DAY as my kickstarter, and Star Wars Battlefront during the second week). 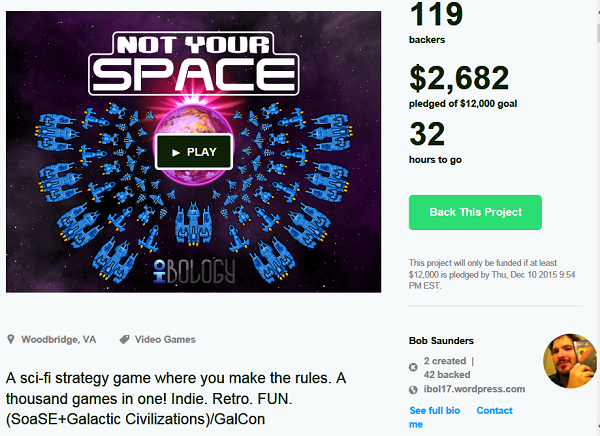 Regardless, I am now treating the Kickstarter campaign as a sort of "sign up sheet" for the next time, because it absolutely will continue to develop. If you like the idea, please go pledge even $1 right now. You will be kept up-to-date, and will be the first to know about any closed alpha or beta versions.

If you want something easier to sign up for, you can now subscribe to the bi-monthly Ibology GameDev Newsletter. Find out what's going on with Not Your Space, as well as XenoBloom, Approaching Infinity, and other new games in development.

If you haven't tried the old demo, or you're itching for MORE Not Your Space, Demo version 3 is now available, with lots of fun additions!

I was on the "Average Giants" twitch stream a few nights ago, and we had a lot of fun. Here's a quick highlights reel:

The Average Giants are @CallMeGIANTYT AND @Avg_Gmr . They do a weekly show where they play indie games and talk to the developers. They (and their extended family) are heavily active in the streaming community, you can also visit their youtube channel.

Here are a few things that have been added in the latest demo (and a Simpson's quote) :

One thing that may change about NYS is the name. I think its very descriptive, but it also conjures up memories of "myspace". The first name I had for it was "Expand and Exterminate", but I found another RTS mod by that name. I've just got a number of good suggestions from some kickstarter backers, but it's still up in the air for now.

Version 2b of the "Not Your Space" demo has been released, with 9 new options to explore, and a FIX for a previous version.

I said I'd add 5 new options this week. I've added 6 just this morning!

Going into detail about the Greenlight process, as well as some game options and a preview of the T-Shirts. Also includes a video of a full game being...

This is "Not Your Space"

"Not Your Space", the customizable space RTS, comes to Kickstarter and Steam Greenlight today!

Not Your Space Demo 3

The latest public demo of "Not Your Space" with over 20 gameplay options to combine in any way you choose.

Not Your Space Demo 2b

This is a FIX for demo 2, because that version of the game would not register a victory or defeat!

Hi, thanks! Multiplayer is something I have been thinking about since the beginning, but the primary release is based on a single-player experience.

And since game-speed is adjustable, I've come up with something called "consensus time": if all players select the same game speed (half, normal, double, etc.), then the game runs at that speed for everyone. Otherwise, it just runs at normal speed.

Looks interesting. Are you planning to add multiplayer?

Indie
Twitter
Tags
Embed Buttons
Link to Not Your Space by selecting a button and using the embed code provided more...