Take command of Northern Guard; a joint military and civilian team of elite superheroes charged with protecting the country from an insidious invasion by super-powered villains

Northern Guard: Assault is a Tower Defense and Real Time Strategy game hybrid that uses super powered mobile units instead of the traditional stationary turrets, which leads to a new evolution in the Tower Defense genre.

NG:A will be released on the iOS, and Android platforms.

North Guard: Assault - What you need to know!

Take command of the Northern Guard; a joint military and civilian team of elite superheroes charged with protecting the country from an insidious invasion by super-powered villains. 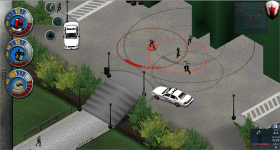 Northern Guard: Assault is a Tower Defense and Real Time Strategy game hybrid that uses super powered mobile units instead of the traditional stationary turrets, which leads to a new evolution in the Tower Defense genre. Read on to learn about the many features that make Northern Guard: Assault a standout defense game. NG:A will be released on the iPhone, iPad, iPad mini, and Android platforms.

The field of combat is always changing; mobile units are an absolute must when the battle shifts. Unlike many other Tower Defense games, in NG:A you only have access to a limited number of units, so the expectation is that you will have to move your units and often. We have employed an RTS style control scheme so you can efficiently and effectively deploy your units. 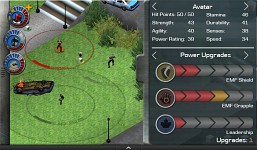 Each unit is equipped with unique and powerful abilities, such as generating a devastating firestorm or firing a precision energy beam. As the commander, you have to choose when and where these abilities are deployed throughout the battle. And like the units themselves, these powers are upgradeable individually.

You, as the commander of this unit, determine when and where they are deployed but keep in mind that with every choice come consequences. Choosing to take action in one area may impact gameplay in other areas. A hypothetical example: Choosing to secure a communication relay over apprehending a known super-powered criminal may result in that same criminal showing up where you least expect him. Of course, there is the potential that making the opposite decision could have similarly disastrous results. 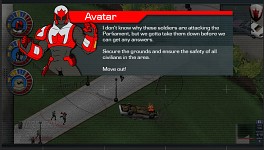 You also have the ability to designate roles to your unit (offense, defense, and support). When deploying these units on to the field, the units acquire different effects (negative and positive) based on their proximity to one another and to the objective. Each unit also has a disposition and this affects how this unit will react to its role, as well as other nearby units.

In many "open map/free-path" Tower Defense games, the player is able to control the path and flow of enemy minions by placing turrets. While NG:A uses free path maps, turrets are not an option. By using the units special abilities on objects already on the map, you will be able to control the flow of combat.

The King of the Throne Tower Defense

Would Be Heroes Tower Defense