In the not-too-distant future, rampant urban congestion has resulted in only one way of delivering a pizza across town in twenty minutes or less… underpaid teenage ninjas!

Post news RSS Our first week on Kickstarter and Greenlight

Our first week on Kickstarter and Greenlight - halfway there? 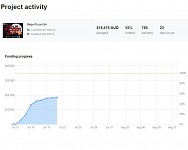 Its been a crazy week. It started with Ben Kuchera very kindly arranging for Jason to write a guest article on Polygon, to coincide with the launch. Apparently it was the most read article on the site that day!

Thanks to the early press, we got most of our backers on the first three days. We were at 40 percent halfway through the third day, and have crawled the remaining ten ever so slowly since. Feminist/Geekery said that we were “the closest thing to a sure bet you can hope for on Kickstarter”. I wish I was as certain! Sidetrack still gives us a thumbsdown, and only a 37 percent chance of success. I genuinely wish I’d never found any kickstarter success predictors. My number one tip for future crowdfunders - back away from the refresh button!

I’ve heard that Steam can be nasty, but I’m not seeing it. We did see a small influx of no votes and
nasty comments after the game was included in a list of greenlight games with female protagonists. (How sad is that, honestly…) but overall the reception has been great and everyone has been very civil.

The big question is where to from here? We’ve had a lot of great press, a lot of love and support from local developers (the Aussie indie community is THE BEST). The Producer of Dragon-Age said nice things about NPG on twitter (squee!!!!) But we’ve still got a long way to go.