An Adventure Fantasy game about a small hero who has to fight his way through hordes of viscous opponents and creatures to save his home town from a dark mage. Cliché... yet timeless.

Things that are happening now.

Ok, just so you know I've been away because I've been working on Tumball: 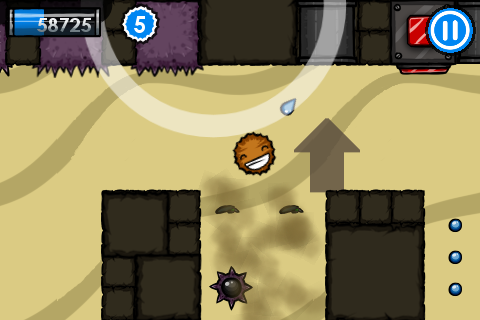 However, Tumball is now complete! So I can return to the project I was working on before: Nine Blade, and begin to progress further.

I hope to redesign a lot of the game elements. Simplify some, expand a lot of others to produce what I'm going to be calling an RPAG (Role Playing Arcade Game). I've always wanted to make a Fantasy RPG game and I'd love to do one in a cartoon style, however 3D projects can be lengthy and RPGs are usually quite detailed. By combining the RPG with an Arcade element I hope to reduce the amount of work and have a realistic project. Watch this space for further development. :)

Sorry about not updating here recently... I know it's been a long time.

Why have I called my game game Nine Blade?... Well it's sort of obvious, but I thought I'd explain it none-the-less :P

A small simple demo. If you try it out tell me what you think and how smoothly the game runs. UPDATED!!

Hey thunderising. Unfortunately my university course prevents me from working on any game projects a lot of the time so there may not be much to look at until summer. :( I am however considering whether this project specifically is right for me alone to develop. I want to build a team and I'm looking for people at my university to help. I'll get back to it when I'm more prepared and available.

I'm struggling on Character design... I'm torn between the very simple style of my first prototype or something more realistic: Actual hands to manulate something, a nicer head shape, feet etc... Any thoughts guys?

I like the cartoony character. The way you have it now with the hands is perfect in my opinion, but it would be nice if you gave him a mouth. (preferably a small one, to keep with the cartoony-cuteness)

Nice job Sydan, maybe you could figure a way to keep the orginal character in the game like he could be a child and the new concept is the teen like in Zelda:OOT wish you all the luck man!

Aha, that's actually pretty cool! I'm working on making the character concepts closer to the first one as he was so loved. But I want the new character to have hands and a stronger build otherwise it doesn't make sense when he wields heavy swords.

Currently reworking the entire 3rd person control system to something more pleasing. Next up redesigning the character concept.

thx, This reminds me of mini ninjas.

I think that was my main inspiration... my little brother got the game and I was motivated by the art style :P