Nerdtopia is a game about equipping your nerds and keeping them sane so they’ll defend the tower’s AI Core (you!) from invaders and natural disasters, unlocking permanent upgrades and abilities using memory fragments collected from the corpses of your enemies, collecting weapons and other loot, and with the help of your time manipulation abilities, build and launch a SpaceNet satellite to take down the evil GaiaNet by infecting it with the Artificial Intelligence Dummification System virus. It’s kinda literally like a race against time. There's also that small detail about the nerds - nerds here are a sensitive and needy bunch; you'll probably want to make sure they have what a nerd needs. Or they may end up making a blood stain in your newly upgraded Cafeteria.

When all your nerds are dead, greasy enemy hands are within inches, and all hope appears lost, worry not! You’re equipped with a special safety override feature, the Future Apocalypse Prevention System. It will automatically displace time to the point you were initially booted up, and you’ll be able to begin the fight again retaining all memories and abilities. Things may not look exactly as they were in the first beginning though, you’re only a prototype after all. But you have the technology, so with the power of F.A.P.S, infect all your enemies with A.I.D.S.!

Nerdtopia is still in development, with several big features planned and also lots of content and updates set out in our roadmap. I will be posting screen shots and videos when I can, and once we get the roadmap formatted to a state it's legible, I'll be posting it so anyone who's interested can see what we have planned.

Thanks for taking the time to check out Nerdtopia :)

This game was inspired by SimTower, Happy Tree Friends, Rimworld, and roguelikes like Crypt of the Necrodancer and The Binding of Isaac!

“I just got so lonely that the only logical thing to do was rip my head off and kick it out the window.”

“The Indoor Park was full and I couldn't play hopscotch. I mean, come on, what was I supposed to do?? So yea... yea I drank some gasoline and set myself on fire.”

“Mercedez and I were just hanging out, it was a regular Wednesday morning, you know? But then they just came right in and shot her in her butthole. Like, seven or three times. I think that’s the point I lost it... it’s all fun and games until someone loses a stripper.”

Hey all! Looks like this is the first blog post, so let’s start off with a big update, and a new office room :) 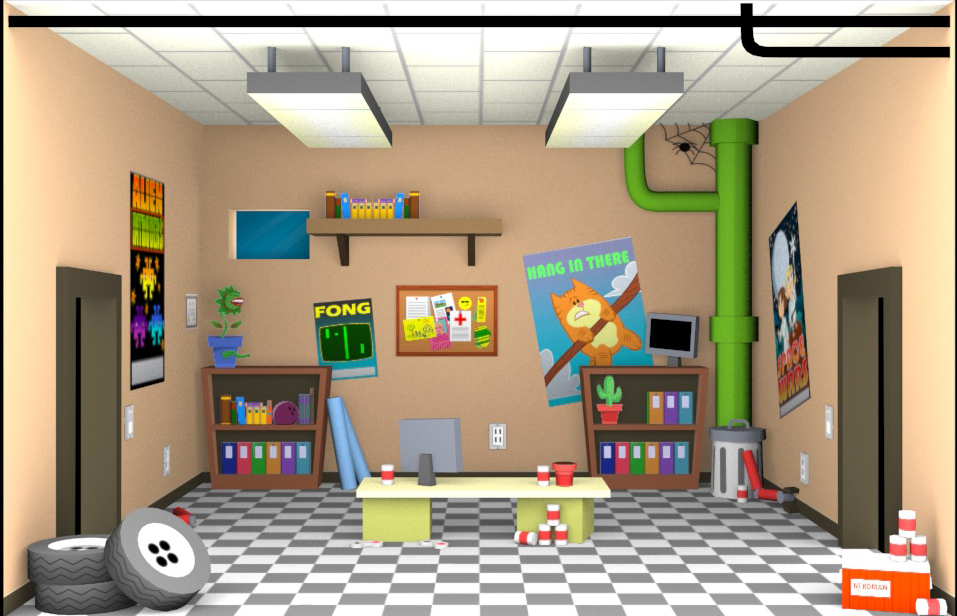 Probably the biggest update is the new battle system and the enemy raids. Enemies now invade your tower and attack your nerds, and the nerds will defend themselves. Enemies have a chance to drop their weapons, which nerds will automatically run over to and pick up. Enemies will also have a chance to drop memory fragments, which are used to unlock permanent upgrades and abilities. Several enemy AI behaviours have been implemented with more on the way, and a new room has been added, the Security room, to help defend against enemies with its wall mounted turrets. And another room, the Hospital room, is on the to-do list :)

I took a shot at designing the weapons and ammo system and based them on how guns actually work. Each gun has a range of ammo that can be loaded into it, and each gun has its own accuracy rating, rate of fire, magazine size, reload speed, and more. Some guns can burst fire, and yes there’s grenade and rocket launchers!

Guns are pretty neat, and though I don’t have my Canadian firearms license, my brother bless his heart, makes sure I hear everything about them. Quite the tinkerer, he built potato guns using literally the same gas that welders use to cut steel, until one blew up in his face and deafened him in his right ear, then moved on to collecting and restoring firearms. Maybe safer? Probably, but I’m not really sure. At any rate though, we can thank him for inspiring the design of our weapons and ammo system :)

We’re overhauling all the tower rooms and their upgrades to give them a larger sense of depth and a bit more character. The room upgrades are going to be more unique so they’ll feel less like an extension of the previous room upgrade level and more like a completely new room just in the same theme. The object decorations within the rooms are also being redone in 3D so they’ll feel much less flat. The first room to get an overhaul is the office, and the next is the Power Generator room.

The office and its upgrades: 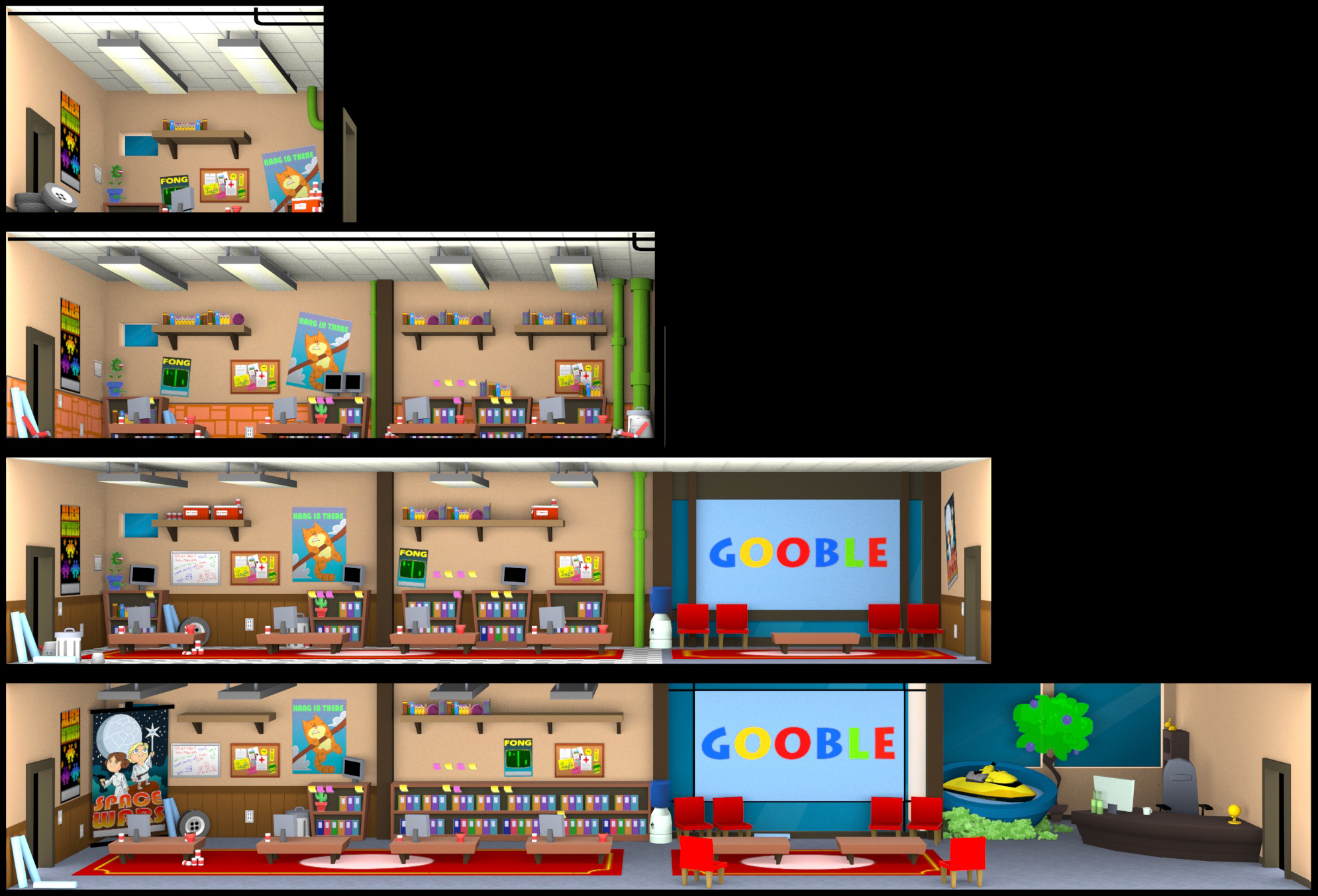 And the power generator room, just not textured: 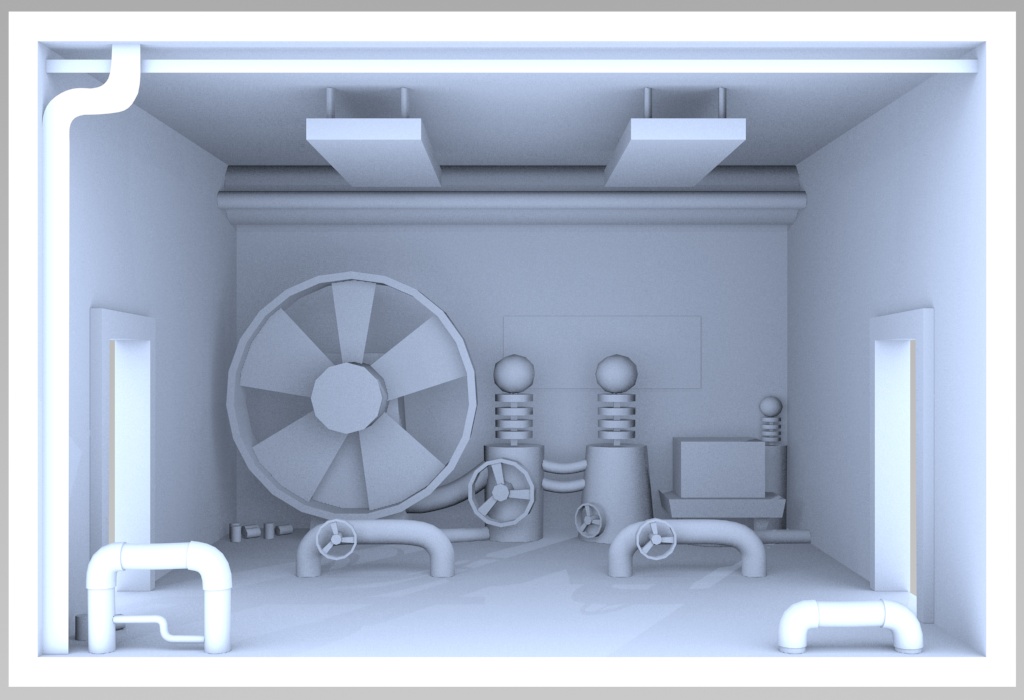 That’s it for this week, check back next Friday for another update where we'll be covering the roguelike features, pathfinding system, and more.

Any comments or questions are very welcome. Cheers! :)