How long can you survive the post-apocalyptic wastelands of NEO Scavenger? In the near-future, supernatural activity and human warfare have fragmented mankind into pockets of civilization struggling to survive in wild and dangerous lands. You awaken alone in an abandoned facility with no food nor water, and only a hospital gown and some mysterious items as clues to your identity. NEO Scavenger is a game where you must survive in the wasteland long enough to figure out who you are. Each turn you must decide where to go, how to scavenge for supplies, and how to deal with anything and anyone you encounter. And with each passing minute, the pit in your stomach grows, your dehydration worsens, your muscles tire, and your body temperature drops in the cold autumn air. Choose your starting abilities carefully, because they and your wit are the only tools you have in the apocalypse!

A new test version of Beta is available for NEO Scavenger. It includes new content, new features, but may also have new bugs. As such, it is available as an optional download.

As some of you noticed yesterday, the update 0.981 didn't fare so well. In my rush to upload something new before vacation, I let a couple critical bugs slip by, and I apologize.

As a result, I've reverted all the demo and beta downloads back to 0.980. They're not perfect, but they're at least "the devil we know." I've also uploaded some "test" beta builds, v0.982, which can be obtained by clicking the links below the usual download buttons on the beta page. (Beta users and Desura customers only.)

Click the text links below the download badges on the beta page to get the "Test" version.
Version 0.982 includes most of the stuff from 0.981, and hopefully fixes the issues we saw with campsites disappearing and game freezing. I also restored the framerate to 60fps, as there were some animations that made the game sluggish at that speed (amateur programmer's mistake).

Unfortunately, I wasn't able to revert the Flash browser versions, so I've made those 0.982 as well. This way, players should still be able to access 0.980 as downloads, and 0.982 as Flash versions. And beta players can additionally get downloadable 0.982.

Steam users can also access the test build. To do so, open up your Steam client and: 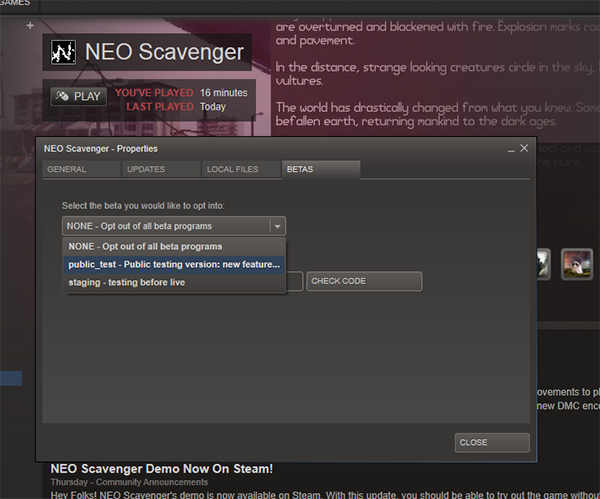 Choose the "public_test" option on the "BETAS" tab in NEO Scavenger's properties.
Following the above steps will begin downloading version 0.982 immediately. Just click "Play" when it's done!

Again, I apologize for the inconvenience and confusion caused by my rushed builds. Thank you for your patience!

Also, I'm going to be leaving town to visit family for the holidays, so I'll be scarce in the coming 2 weeks. I'll be leaving tomorrow (18th) and returning January 2nd, 2014, though I'll try to pop by occasionally to help with any major issues. In particular, if you're having trouble with an order or access to your goods, feel free to contact me by email. That'll probably be the most reliable way to catch my attention.

As mentioned above, I was in a bit of a rush to get some new content out to you guys before taking off. It's been over a month since the last build, and I felt bad making you wait two more weeks. So hopefully these new test builds are enjoyable to tinker with in the meantime. And with any luck, 0.982 actually solves all of the issues it was supposed to, and it can be the new "official" build when I return!

Thanks again for your patience, and even more so, thank you for everything you've done to make NEO Scavenger such a success. 2013 was truly a year to top all before it, and I think we still have brighter times ahead!

Happy holidays, all! Stay safe, and see you in the new year!