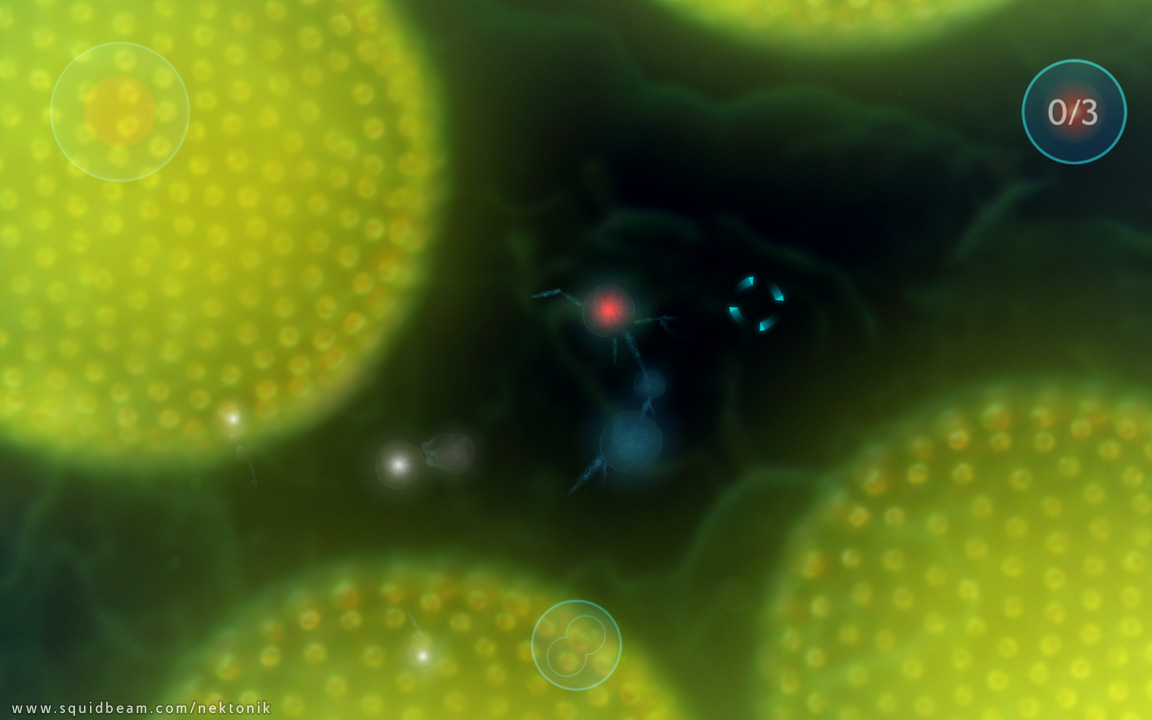 In Nektonik you control a microscopic and frail aquatic organism called a Nekton, and you follow its most amazing journey as a species. One generation at the time, you assist them in surviving, modify their genes and customize their unique anatomy. Will you evolve the mightiest Nekton?

In each level you need to grow your Nekton to a specific size. To grow larger, you can defeat other organisms and capture the parts they leave behind. Once attached to your Nekton, these parts integrate completely - some offer more speed and agility whereas others grant you new abilities. 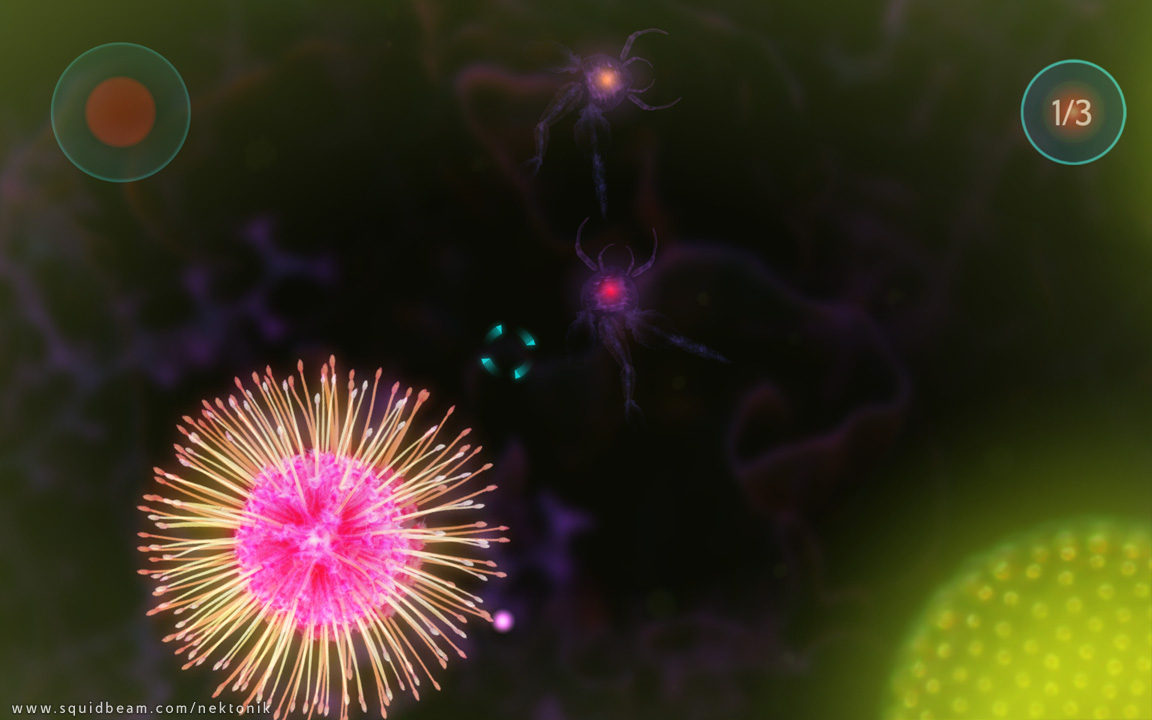 Once a level is completed, the Nekton you played with is left behind. It has gone through its life cycle and was just a link in the long chain of life. It must now pass on its genes to the next generation, making it possible for its descendants to thrive and eventually dominate the world of Nektonik. 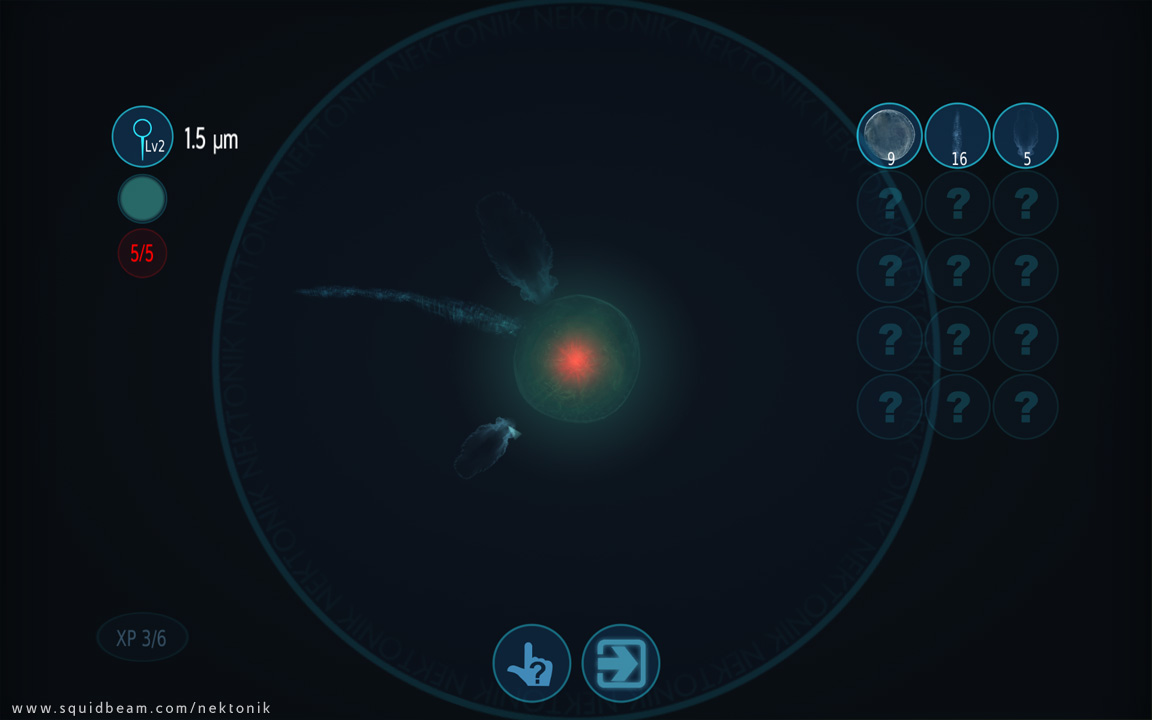 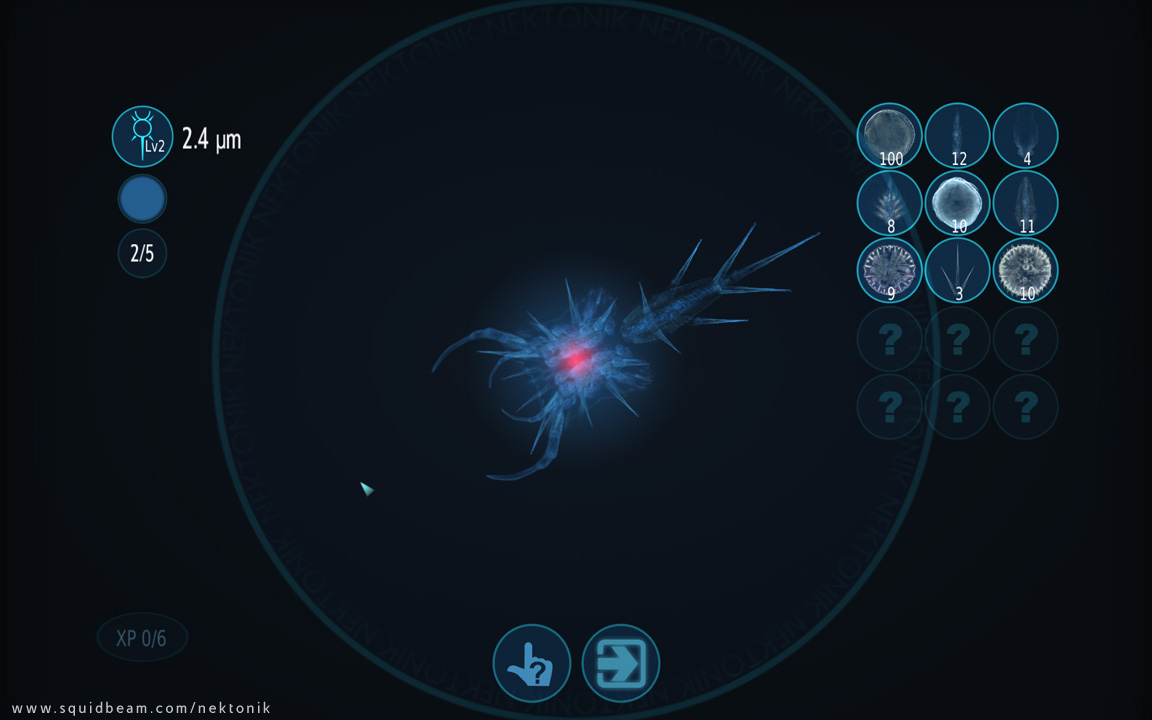 In the Gene Lab, you can genetically modify your Nektons. One generation at the time, you assist them in surviving, modify their genes and customize their unique anatomy. The design of your Nektons drives the way how the tiny organisms swim and behave. Customize them the way you see fit! 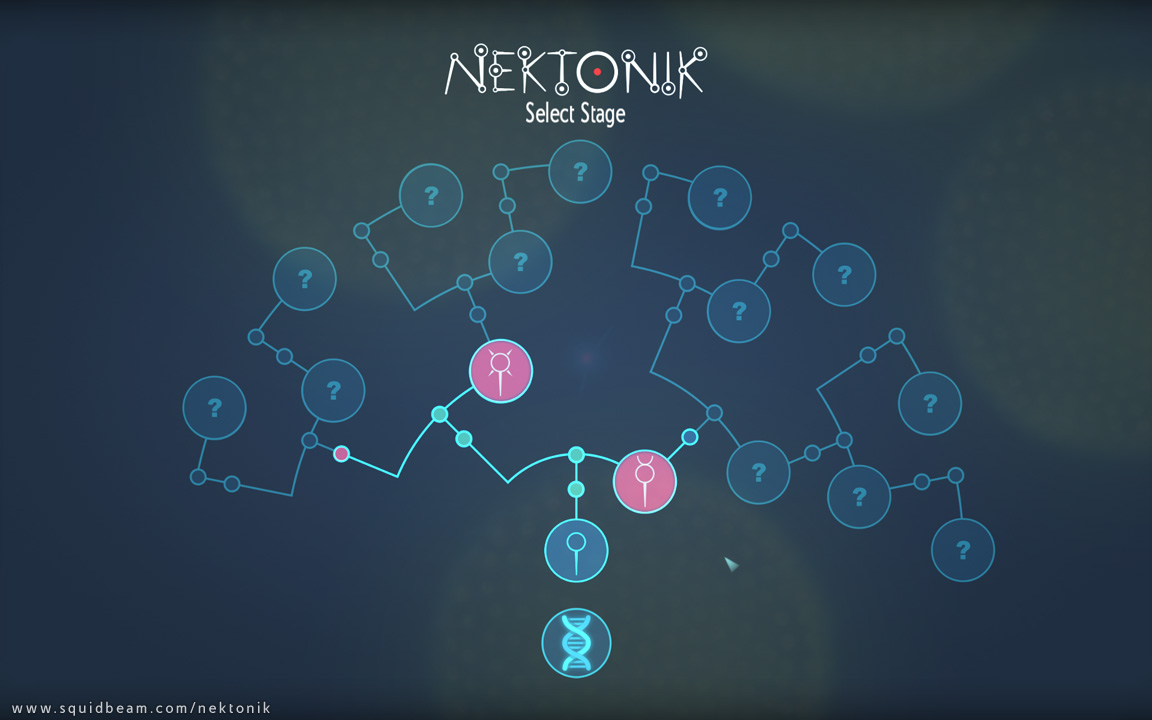 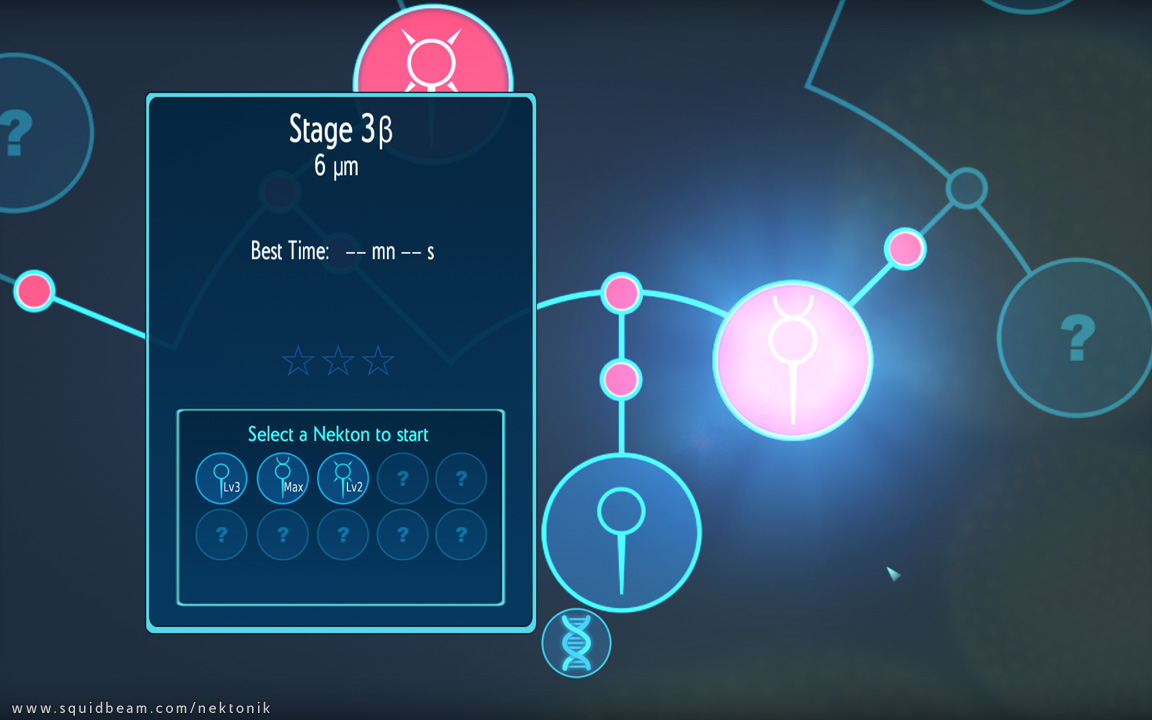 The world of Nektonik is non-linear and divided into linked stages that can be revisited over and over. These stages hide many secrets, some have puzzles to solve whereas others have areas that can only be reached as you gain new abilities. Much larger foes await the player later in the game and unlock new Nekton types. These new types offer new features and abilities, and can even be bred to produce stronger Nektons not otherwise available.

You would like to take Nektonik out for a spin? It is now possible, the Web-browser Alpha is now online!

The alpha features eight fully playable levels and the gameplay mechanics are in place. The game also automatically saves your progress! Of course this is a work in progress and you will experience bugs and incomplete content...

This version uses the Unity Web Player, so make sure you install it first (Chrome users may have to use some workaround... sorry). Once the game is loaded, you can right-click on the Unity window to switch to full screen. Graphics are a bit rough in places and this is due to this optimized build, the final release (full HD) is a lot sharper overall.

All the feedback is welcome, be it positive or negative. I still think the controls could flow better, but please don't hesitate to let me know what you think.

Thanks for helping and supporting the development of Nektonik :)

A new alpha for my game Nektonik is now available to play!

This version has a LOT of improvements and new features, here are a few:

* New Game Option menu allowing you to change the game's difficulty, quality and to also switch to the tablet PC mode (the touchscreen mode is a lot of fun!)
* You can now test your Nekton in the Gene Lab
* The 'spike' Nekton can now shoot projectiles

Feel free to test it out and share your feedback, be it positive or negative. This demo uses the Unity Web Player, so it won't work in Chrome, sorry.

Seems like a cool game but your link (Squidbeam.com) is not opening in Chrome :(

The concept reminds me of an XBox Live game called Solar and the PS3 title Flow, both awesome games that I loved.

Good luck with the rest of the development.

Hi,
Sorry, I've been so busy at work... Rhaaaaaa... :)
Thank you for your awesome feedback, I really appreciate it. You are right, the Unity web player is sadly not supported in Chrome anymore... but it should still work in other web browsers.
I totally didn't know about Solar, I checked it out and it totally looks like my kind of game too! Flow (as well as Spore) really motivated me to create Nektonik, although my game is based on a life simulator I wrote back in 1995. The aesthetic of Flow is superb and so mesmerizing, amazing game for sure.
Take care and I should have a new build available really soon :)

A new alpha of Nektonik is now available to play:

Once again, I fixed tons of little things, but the main changes are:

As always, all the feedback is welcome, be it positive or negative.

I have just updated the playable Alpha for the game. As before, you can play it now in a web browser (Unity Web Player) here:

Although I fixed tons of little things here and there, here are the main changes for this new version:

As always, all the feedback is welcome, be it positive or negative.

Hi everyone!
Nektonik is still in heavy development but I would need your help. Feel free to try the web-browser alpha and let know what you think. Feedback is very welcome, be it positive or negative. It will greatly help me improve the gameplay and the game overall. I love life simulation games, but I also enjoy playing action and exploration games, this is why I tried to blend these concepts in Nektonik - please let me know if Nektonik is a game you would enjoy playing.

Thanks for your help :)

This is a awesome concept, well done! :D

Thanks a lot! I still have some way to go before the game is finished but I'm very happy that you like it!! :)

Continue the good work then :P !