Narcissus is a co-operative two player jump and runner with mind melting gameplay and a catchy soundtrack.

The perfect game to put any healthy relationship to the test.

Hey Folks! I finally got the time to sit down and write some articles about the events that I went to. It's been a stupidly hectic few months and I've really had a great time at some events. I did a post about what I'd be going to go to a month or so you can read here! :DIndiedb.com 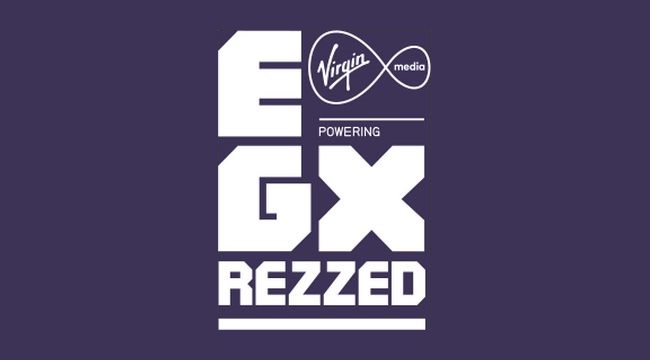 Man. MAN. MAAAAAAAAAAN. Rezzed was insane. Had such a good time. Wasn’t much that could’ve prepared me for that event (with the exception of investing in some extremely comfortable shoes). Spent 3 days neighbors with a bunch of Devs in the Leftfield Collection, who all had a fantastic variety of different projects. Handed out a bazillion business cards, did a bunch of interviews and made a lot of people yell at each other over the course of the weekend. Birmingham was a great city to have the event in (with the exception of the Custard Factory) and the developers who went were awesome for getting involved with the nights out.

Here were my favourite games of the show:

Narcissus – Hehe, just kidding, that'd be awfully narcissistic of me.

Monstrum – Call of Chuthlu meets Alien Isolation with Oculus support. With games such as this, I’m always a cowardly custard and this game catered to that by letting me hide under tables, inside of lockers and behind practically anything that would put me in between me and that absolutely terrifying beast that walks the corridors of the ship. Basic premise is you have a series of things you have to do around this abandoned ship and stopping you is a huge glowing monster that staggers the corridors. Headphones are a must for this and whilst I didn’t get chance to give it a go, Oculus looked crazy fun.

TinyKeep – I must admit, whilst Phi is an awesome guy who I’ve known for months, until I’d been to Rezzed, I hadn’t fully invested myself into playing TinyKeep. Getting lost in the crypts and caverns of the dungeon got me crazy anxious (I didn’t realise there was a map). There were so many scenes that felt handpicked out of the cinema – facing hordes of enemies as I back through a door only to find the room I’ve entered filled to the brim with more enemies. Leading huge numbers of skeletons and wobbly soldiers over spikes is thoroughly satisfying and the weapons feel great to handle. Soundtrack was awesome and the voice acting was fantastic (wouldn’t expect anything less Kathryn!) 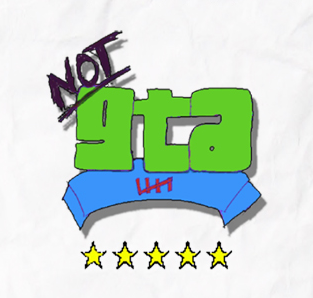 NotGTA – Whilst the name is a bit of an IP hot potato, the story behind the team on this project is well worth investing in. A member of their team approached me on the weekend and asked me to check out their game. The team behind the project built the game as a last ditch effort to fund their charity for a year. Peer Productions visit people who’ve suffered from problems such as substance abuse, domestic abuse, underage pregnancy and homophobic bullying and document their stories in the form of theatre performances to show in schools and events around the UK. Unfortunately their government funding was cut so this is their backup plan. The game has a clever use of the snake mechanic (the higher your notoriety, the more people who chase you). The visuals are simple but charming, sound effects/music are cute and has some great humor. All profits go to the charity. Great cause, great game!

Here are my highlights from my own stand: 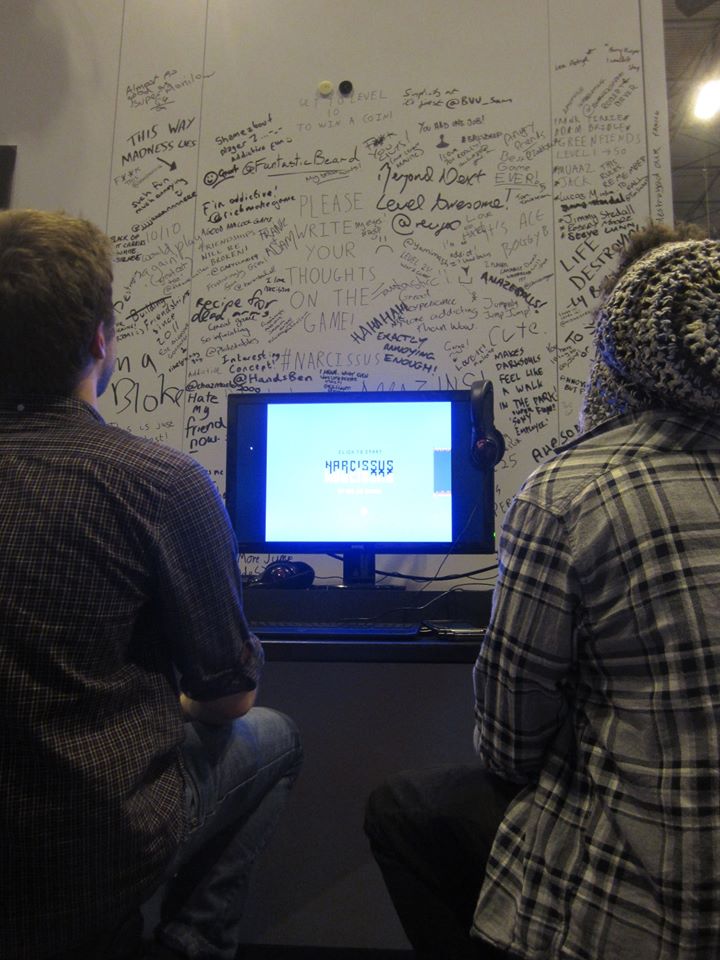 Messages on the walls – When I realised that I’d forgotten to bring a poster, the alternative of drawing all over the walls popped into my head. Got some fantastic feedback and hilarious comments written all over my wall segment. Here’s a sample of some of my favourites:

Dedication – Some people are very persistent! There was some hardcore fans on the day who played the game through from start to finish, taking as long as 2 to 3 hours to finish the game! Those who undertook this almighty task will be immortalized in the game as the “Green Fiends’”, the pioneers of the new levels of Narcissus.

Things I hadn’t seen before – There was one particular pair of players that stick in my memory. Basically, in the later levels, they paused the game in order to plan out their route through the levels. Never thought I’d see such a tactical approach to playing Narcissus and that really was my highlight of the event. So cool to see them discussing the game as if it was something like a board game across the arcade machine from one another.

An absolute howler was when a pair got to level 44 and the power to the iPad cut out.

The event was a fantastic opportunity to make some amazing new friends, network, drink and really re-invigorate me to finish the game. Thanks go to David Hayward who chose the game for the show and Luke Smith, who was enthusiastic right down to the end where I was lingering at the end in nostalgia mode.

Thanks for Reading this and I'm going to try and blast out these articles for the rest of the events I've been to as soon as I can (going to Austria on Wednesday so is going to be a narrow window to get it sorted in time!)

Thinking about taking your game onto Greenlight? Here's some advice that I wish that I'd known before launching Narcissus on there.

Narcissus on Tour! Expo Dates, Locations and What we're Showing!

An article with the details of the different dates and events that Narcissus and the arcade box will be at in the coming weeks, along with opportunity...

Article about how the Narcissus Arcade machine was built and it's first event attended. Enjoy!

Demo of the first 10 levels of Narcissus to give you a taster of what to expect from the final game. Enjoy!

does the project still exist?

Narcissus is a retro style platformer with a killer sound track, we had an absolute blast playing! Check out our video below ....

I just played this game after seeing it on #screenshotsaturday. It's great, definitely hope to see this on iOS soon.
I hope there'll be easier control for single person playing. It'll be better if you make the control tap the left side to control the black man, and tap the right side to control the white one. For two-player, definitely as seen on the vine video. Tap on bottom and up side of the screen :)