Roguelike-like redefined! This graphical adventure pits a party of characters against a procedurally generated world made up of treacherous forests, caves and, of course, a mysterious castle! Turn based combat based on (but not limited by) the award winning and ubiquitous SRD 3.5 standard provides endless tactical possibilities, as you go up against parties of Orcs, Undead, Dark Elves, Demons and more! Collect amazing items to wield in battle, study old tomes to increase your skills, and gather mushrooms to brew into powerful spells. An incredibly minimal interface devoid of the clutter so common to roguelikes lets you perform both simple and complex actions with ease. Lighthearted coffee-break combat or meticulous powergaming, the choice is yours. Fast paced, Turn based. Simple interface, Complex possibilities.

Mysterious Castle procedurally generates a new world each time you play. But what makes a good game world?


How do you design a unique and interesting level? Procedurally Generated Content (PGC) is all about that question. Roguelike games are all about PGC. Classic games such as nethack and angband generate dungeons made up of rooms, corridors and vaults. The primary means of variation is to increase the power of monsters and treasure, with some minor cosmetic changes, and a few unique traps scattered about for good measure. Some games go much further, with overworlds of varying terrain connecting dungeons and caves. One such game, and a major influence on Mysterious Castle, is Zangband. Zangband is a truly awesome roguelike which connects dungeons with a huge sprawling overworld of natural terrain dotted with settlements. It's completely open, meaning you can choose where to go, and can easily walk into a confrontation that you have no chance of surviving.

By changing the arrangement of terrain and the populations of monsters, you can do a lot to change how a level looks. But how much does it change how a level is played? Most RPG's and roguelikes introduce new mechanics throughout the game, to increase the player decision tree. This is commonly done through spells, items, shrines, NPC's, quests, etc. In my opinion, good RPG's and roguelikes sometimes prune the decision tree drastically, leaving a few options that need to be weighed carefully. Withought this pruning, the game becomes a grind, with the only decision being which enemy should you kill first. How a level is designed is an important part of how you make decisions. We've all had the pleasant surprise of discovering a secret door that changes the nature of an encounter. Without that secret door the options become trite. Cast fireball or lightning bolt first? Not to take anything away from tactical decision making, I love that aspect of turn based games, but an open wold game needs more that just combat decisions. Take a look at these two levels generated by Mysterious Castle: 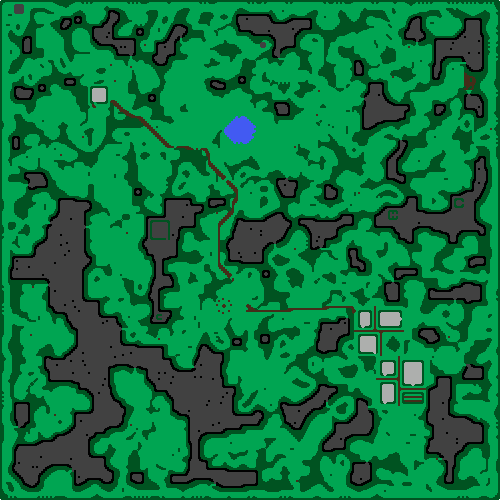 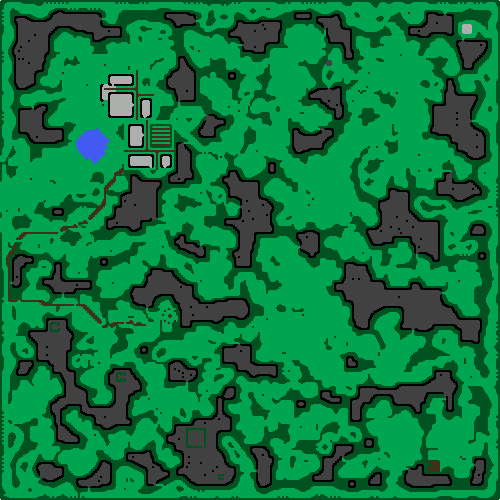 They look a little different, and If I were to change the terrain graphics, they might look a lot different. But would anyone play them any differently? Probably not. The basic decisions would be the same resource management problems of any other game. Zangband and other such games introduce an additional decision which increases the possibilities of play, namely, where do you want to go? This leads me to the next step in Mysterious Castle. Where do you want to go? Well, where is there to go? I've just implemented level chunking, which makes seamless large worlds possible, and the next challenge is to make places to go. Not just visual variations, but gameplay ones too. Would you go to a town with a renowned backsmith, or go to the wizards university in the capitol, or perhaps you'd rather climb the mountain to find the fountain of youth? With enough variables, a multitude of choices open up, and things get more interesting.