Moonlighter is a rogue-lite game about Will, a shopkeeper that dreams of becoming a hero. To make a living, he needs to venture into the dungeons near his town, defeat strange enemies and loot items he can sell at his shop. Managing the gold from those sales wisely is the only way he’ll get strong enough to open the last dungeon. Moonlighter has infinite randomly generated dungeons, many cool and expensive items, lots of weapons, five tough bosses, tones of gold and dozens of weird enemies. You start with some cheap equipment. And a shop.

We are DigitalSun, a game studio from Spain. We’ve been working on a game called “Moonlighter” for some time, and we would like to share some info about it here and try to get some feedback from the community. Thanks!

Moonlighter is a rogue-lite game about Will, a shopkeeper that dreams of becoming a hero.

To make a living, he needs to venture into the dungeons near his town, defeat strange enemies and loot items he can sell at his shop. Managing the gold from those sales wisely is the only way he’ll get strong enough to open the last dungeon.

Moonlighter has infinite randomly generated dungeons, many cool and expensive items, lots of weapons, five tough bosses, tones of gold and dozens of weird enemies. You start with some cheap equipment. And a shop. 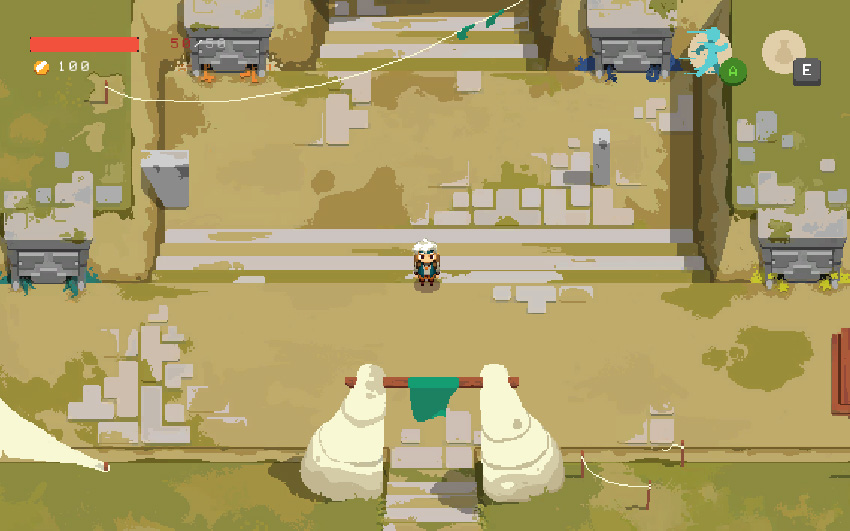 Moonlighter has a dual nature. At its core, it is an action rogue-lite: focused on combat, looting and exploring procedurally generated dungeons. Though, in order to get stronger and become hero, the player will need gold, a lot of gold. To get it, he will need to sell the items he finds on the dungeons and wisely invest the money on shop upgrades, new equipment, etc.

We want the player to have a lot of fun exploring dungeons, defeating enemies and getting more powerful, but also to worry about questions like: How much money should I ask for this item? Should I keep or sell this artifact? Should I invest my money on more shop space or potions? Which weapon should I upgrade? How do I get enough money for that?

Most of the game time will be spent fighting amazing enemies in dungeons but we want the player to constantly wonder: “how am I getting the highest amount of gold out of this situation?”

The main references of the game are:

The gameplay of Moonlighter, unlike other roguelike games, focuses on the character progression, creating a longer, more strategic gameplay focused on exploration, management and combat. For this reason the core gameplay is divided in two phases: 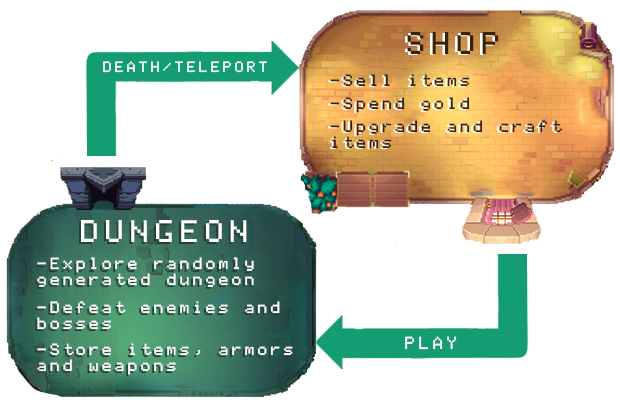 The player explores the dungeons during the nights, when everyone else is sleeping. It is the perfect moment for shopkeepers, like Will, to gather loot: when the other heroes won’t notice an unexpected rival.

There are five dungeons in the game: four of them are always open to visitors, each more dangerous than the previous one. The last dungeon, can only be opened with the “keys” gathered in the other four, but that’s just a local legend, nobody know what’s behind the sealed door. They are located inside the village of Rynoka, everyone knows them and the village makes a living from them.

Moonlight, the shop of Will, is critical for Moonlighter since it’s the only source of gold inside the game. We want it to be agile and flexible to adapt to the different styles of the players.

The shops functions as a skippable minigame on which the player places the items he wants to sell on slots and reacts to the customers that enter the shop.

The town phase starts when Will returns home from the dungeon, in the morning. During this phase the player can choose to open the shop and put some items in the market, or he can go to the other shops in town and spend some money: upgrading or enchanting the equipment, crafting new weapons, purchasing new items, etc...

It will be possible to upgrade the shop, investing a large amount of gold. This will allow to sell a larger amount of items at the same time, attract better customers, etc...

Moonlighter is all about the items. There is no “level progression” so having powerful equipment will be the only way to beat the game. Choosing what to keep, what to sell, what to upgrade, and selling the items at the right price will be crucial.

Each item has a base price which is initially unknown by the player. When an item is first picked an entry about it is added to a merchant notebook that Will carries with partial info about the object, resembling the current knowledge that Will has about the object.

All items belong to a culture, linked to each of the dungeons. The player will know more about an item as he obtains more items from that specific culture. All items which are part of the same culture will look alike, so it will be easy for the player to associate them. As the player knows more about the items of a culture, it will get easier for him to set the “perfect” price on the shop. 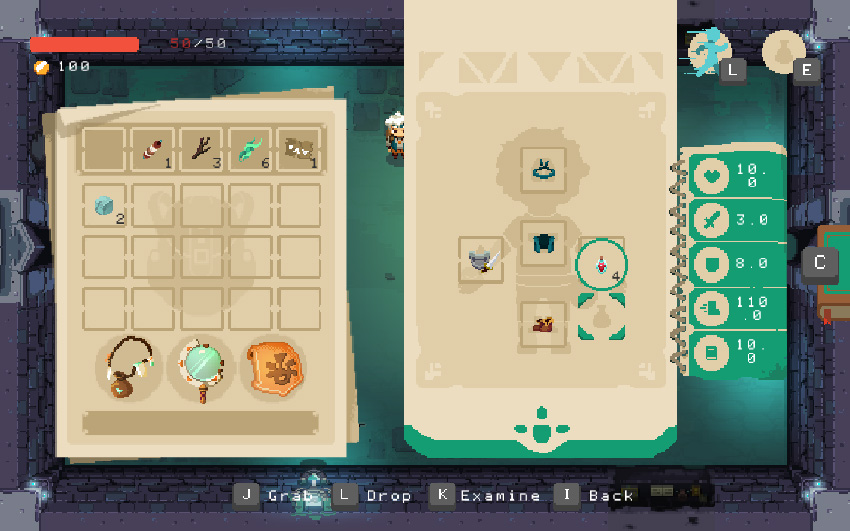 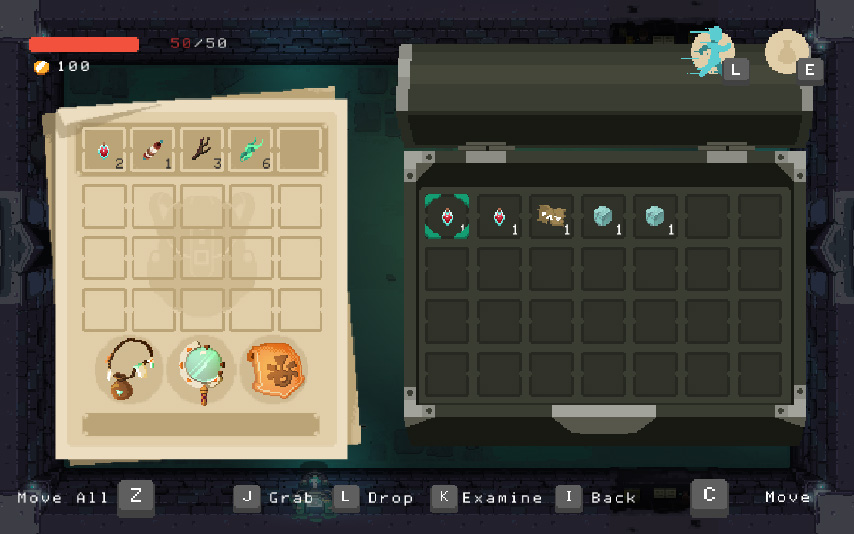 Combat is a core element of Moonlighter. There will be a very wide range of different enemies that will spawn randomly in rooms. Our intention is to make Moonlighter a very challenging game, one that requires the player to slowly build power to advance. 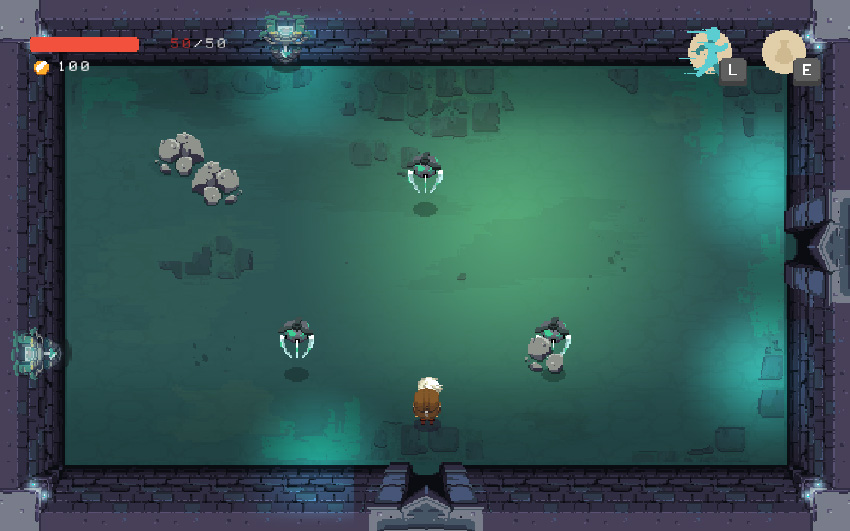 Unlike other similar games, when the enemies spawn, the doors of the room will be kept open, so player can keep walking and explore faster. If monsters are defeated they will not respawn, even if the players exits the room and enters again, giving the player the possibility of “cleaning” rooms and slowly take control of that instance of the dungeon.

Chests will spawn randomly on rooms and the player will only be able to open them after defeating all the enemies in the room.

The loot that enemies drop on death will consist of parts of their bodies, or weapons and armors they are carrying.

At the end of each dungeon the player will need to defeat a very tough boss that will drop a very valuable loot and unlock new possibilities for the player.

The village of Will, Rynoka, is a small commercial town near an access to the dungeons. All the lifestyle of the village is closely related to the wealth obtained from the ones that wander into the dungeons. We wanted Rynoka to feel like a quiet, friendly and safe place in contrast to the permanent aggression of the dungeons. Inside Rynoka Will finds everything he needs to progress in the game: his shop, the other shops, some NPCs (like merchants that visit the town) and the access to the dungeons.

Moonlight is the shop the Will inherited from his family. It starts the game as a very humble shop with very little space for items. As the player progresses in the game the shop will grow to be able to sell more items and attract more and better customers.

Rynoka was born around an ancient place known as “The dungeons”. On a small excavation five gates were found, leading to rooms and corridors filled with dangers and wealth.

Four of them are open for the seekers of fortune and glory. Items, architecture and creatures seem to be linked in each dungeon as if they were part of the same culture.

One of them, the fifth, has always been closed, sealed with some strange power.

The dungeons have a strange property: they seem to offer infinite variations always filled with creatures and objects.

Dungeons like these are not strange in the world of the game and, in the times of Will, nobody wonders too much anymore about what the gates are. They simply see them as a source of wealth and adventure.

Of course, there is more to it. 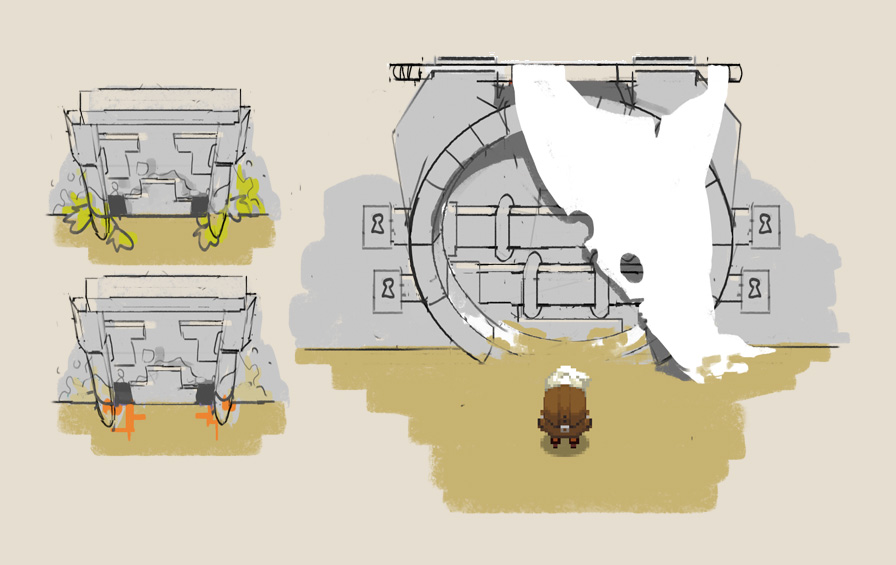 Other merchants also have their shops located around the main square of Rynoka. They upgrade and enchant craft and sell basic items to the main character. Besides buying from them, the player can “invest” money to the other merchants, to improve their shops, making them really “interested” on you. 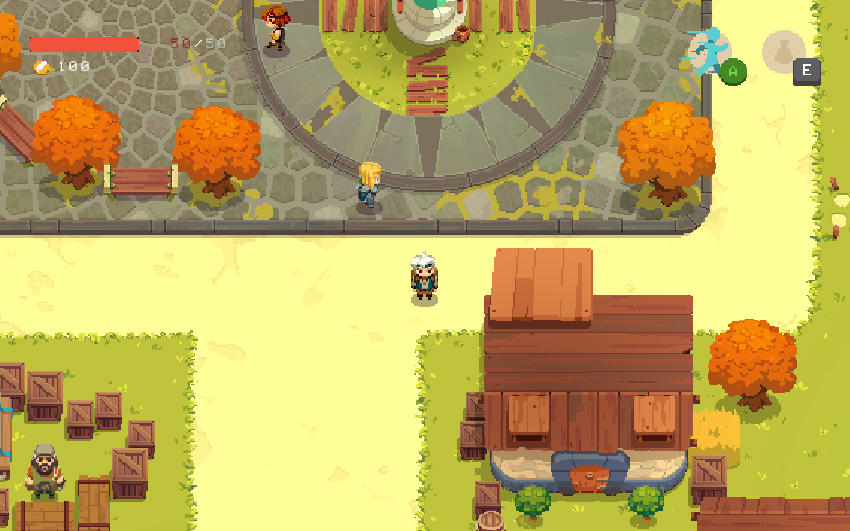 We try to deliver a balanced pixel art style between synthetic modern tendencies and a more descriptive classic style. We never saw Moonlighter as a retro game (actually, quite the opposite) but, at the same time, we can’t deny the influence of dozens of classic games. We are proud of that!

Here you have some samples of final art, animations and our concepting process. We hope you like it. 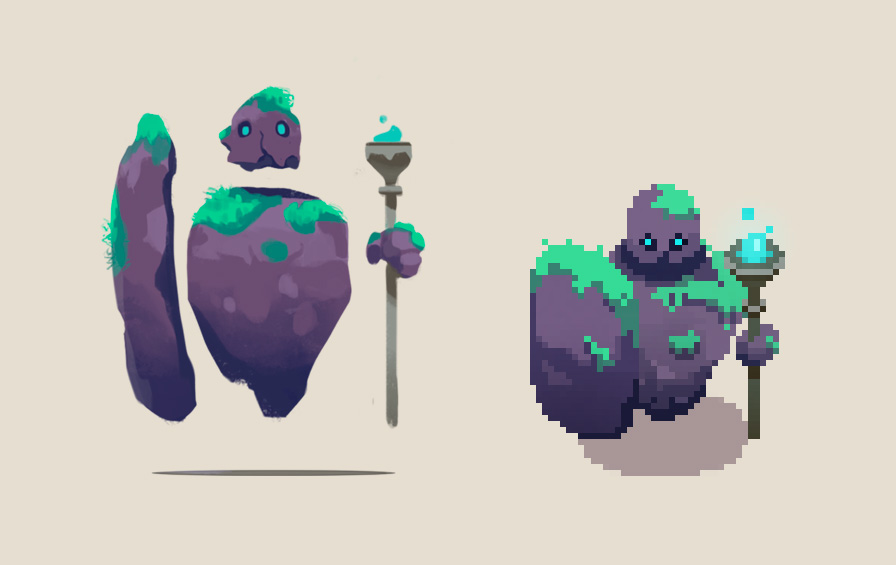 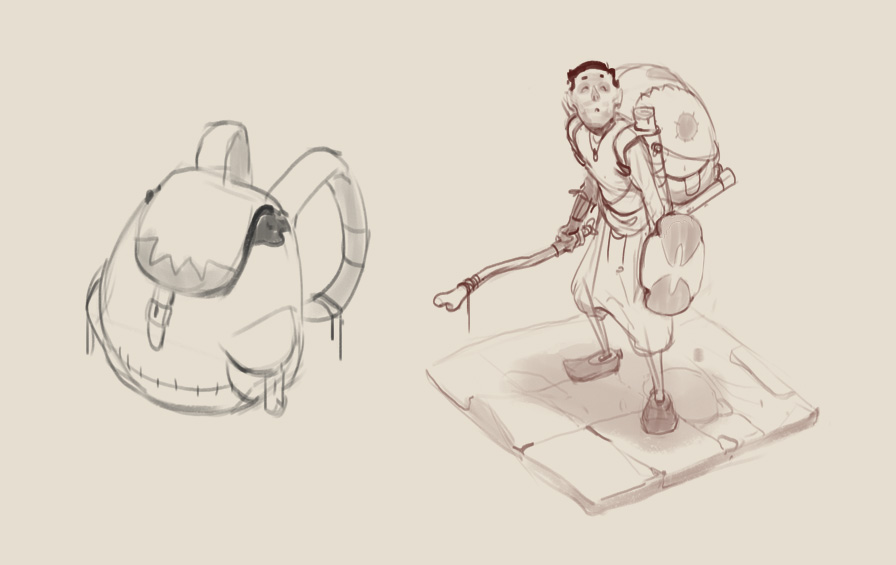 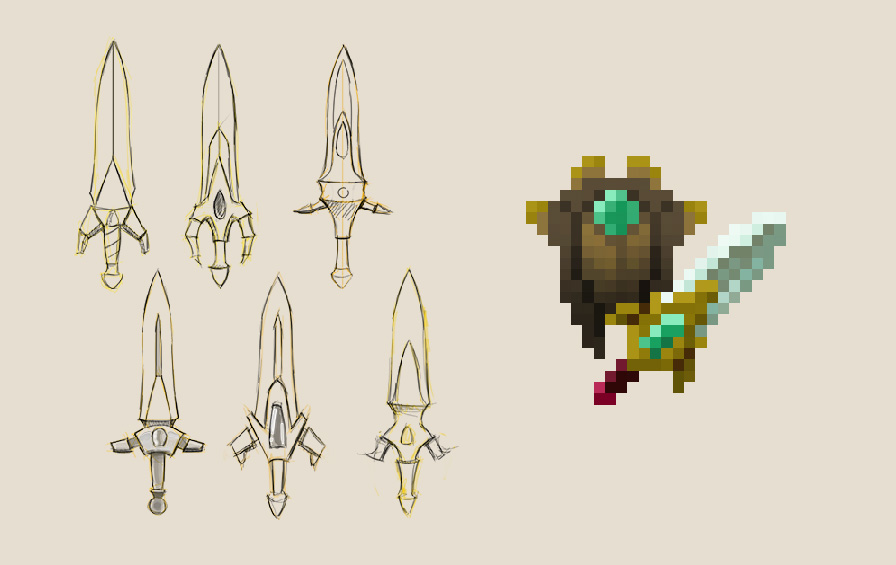 Moonlighter is our first game as an independent company so our goal is simply to make a game as good as possible. We hope that, if we love it, other people will too.

We plan on selling it on Steam first and the, maybe, offer it on the digital stores of PlayStation and XBox.

Currently we would say we are around 35-40% into the development and our current goal is to launch the game early 2017. This is a development that depends a lot on playtesting and trying out ideas. We think it might also be a good idea to open and early alpha to receive feedback from the community and help us improve and balance the game.

We would LOVE to hear what anyone thinks about the game. What do you like, what you don’t like, how you would make it better, etc… any idea really! We want to be open to the community during the development so feel free to get in touch with us at anytime. We are still deciding about many things about Moonlighter and we would love to listen to ideas from other developers and fans of the genre.

I can already tell you that the shielded enemy will be too annoying. Please make it so that hitting it on the side opposite the shield is vulnerable as well as the back.
Otherwise the game looks really good and has my interest! I'm really looking forward to a concept art package because that looks even better! (Most of the game looks great, but the weapons remind me of the minecraft toy weapons in how pixelated they are)