Synopsis
Follow the adventures of our not-so-heroic band of misfits in their travels around the world as they get themselves into (and out of) various kinds of mischievous and sometimes idiotic adventures.

First adventure: "The Gathering"
This is their first great adventure. It places our friends scattered all over the place and have not yet met each other. Our "hero" finds himself being pushed toward helping out his town, since everyone else has run away or is hiding. With nothing more than pure dumb luck at his side, he decides to accept the quest and heads out into the world !

This is a complete mini-adventure containing about 2 hours worth of game play and comes to a conclusion after fighting the "final boss" at the end. You can rush to the end and get there sooner, but will likely find the fight difficult if not around level 8+ by the time you get there.

The adventure contains a single home town, forest and two interconnected caves. Each new map you visit introduces some new monsters, each being a bit tougher than the one's prior.

The forest and first cave maps each have 15 chests hidden within them giving you all kinds of free loot! The second cave contains a small puzzle to solve and then finally the "final boss". You can find a Vendor and Inn within the town where you can buy supplies and rest any time needed.

Upcoming Chapters
Mischieviots is currently being planned out for at least 6 more additional chapters taking you on adventures focused on each of our friends while they explore the world around them. The next chapter being written is “Dwarf and the Dynamite” and development for it will be starting very soon!

If you'd like to play this game on a mobile device, you can also download it from these sites:

Also, using our built-in "save service", you can share several save files between desktop and mobile devices so you don't always have to start fresh each time.

Key features
Here are some of the key features currently available. Many of these will be expanded upon as I continue to develop additional chapters.

- 6 playable characters.
- 12 levels of equipment, weapons, items, orbs and spells available to play and the planned cap will be level 50.
- 10 various types of monsters for you to defeat in the mini-adventure. (not including the 50 "little animals" wandering around the world map). There is planned to be over 70 different monsters in total.
- 20 different spells available with tons more planned out.
- Characters learn special attacks as they level up that are still useful at higher levels.
- Defensive options can be used during combat also. Some characters also have custom one's.
- Quest journal allowing you to keep track of where you've been and where to go next.
- Random and Strategic monster encounters.
- Mana regeneration. It will regenerate at a rate based upon remaining Mana; the lower your remaining Mana, the slower it will regenerate. So, if you don't manage it properly, you might have to wait for it to regenerate over several turns!
- You are able to save the game anytime you're not in combat; allowing you to play as little or as long as you wish and pick up exactly where you left off.
- Optional Auto-save is available for those who prefer to use it.
- Multiple profiles. Shared computer/device? Give everyone their own profile.
- Orb crafting allowing you to customize your characters statistics.
- Scroll crafting allowing you to customize your character spell books.
- Customized "quick access" window that allows you to set up any of your favorite items (potions etc) for easier access to them. This helps you spending time looking through your pack for these over and over again.
- Turn-based combat system with a small twist. Instead of strict turn-by-turn attacks, players are able to take their turns as soon as their characters agility bar allows them to and the chosen actions will be taken right away. Monsters will attack in return when not being attacked by the player. This means that if you have all your characters waiting on their turns, the monsters will relentlessly attack you until you return to the action!
- Multiple adventure support will allow us to create as many mini/main/side adventures as we want in the future.
- Use our private "save service" allowing you to share the same save files across all 3 platforms (assuming they'll have internet access)

Crashes and Providing Feedback
All feedback is welcome, but also please try to report any immediate issues, crashes or problems you run into.

As much as I’d love to not have anyone crash at all, if you do happen to crash, try to recall what you were doing at the time and let me know along with which operating system you were on.

You can also check the “CrashReports” folder found in the same directory as the game (created when needed, so if no folder, no report was made) and send that along for review.

Under most conditions, your current game will also be saved as a separate slot allowing you to pick up where you were just before the crash.

Installation
This should be pretty simple. Unzip the downloaded file to a directory of choice and then run the EXE provided. Do not run the JAR file directly since the JVM provided with the ZIP file is the one best suited for the game and using the EXE will start it with that JVM instead.

Quick Start
To move the character on the screen use WSAD or the arrow keys and SPACE key to run. You can use the mouse or keyboard to use menu items. See the Options dialog for specific key mappings and to change them as you see fit.

Some techy stuff
Mischieviots is a hobbyist Turn-Based 2D RPG project I've been working on for over two years. The majority of that time was spent building the "engine" for it and has been written to allow future adventures to be created without too much additional coding effort and potentially allow for future player modding. In the last few months I turned focus onto making this first mini-adventure to show off all the major parts of the engine.

It is written in Java using LibGDX and is available on Windows, Linux, Mac. Mobile versions for iOS and Android are planned for the very near future.

Development Updates
I'll be updating this blog any time something visually new/fun is added to the game or any major changes. I make weekly developer note entries on my own site, but those don't tend to be overly "flashy" and lean more toward technical changes made. If you are interested in reading them though, feel free to check them out each week on the Developer Website or follow me on Twitter.

This week I've added two new interfaces to the game that should help with combat and inventory maintenance along with some changes to monsters once they've spawned.

When visiting the vendor or looking in your inventory, previously you had no way to do a full comparison of the equipment piece your looking at against all the characters. I've now added a little window that allows you to see the benefits and losses a certain piece of equipment will have on all the members of the party. This should help everyone decide if they should purchase the item and who could make the best use of it. 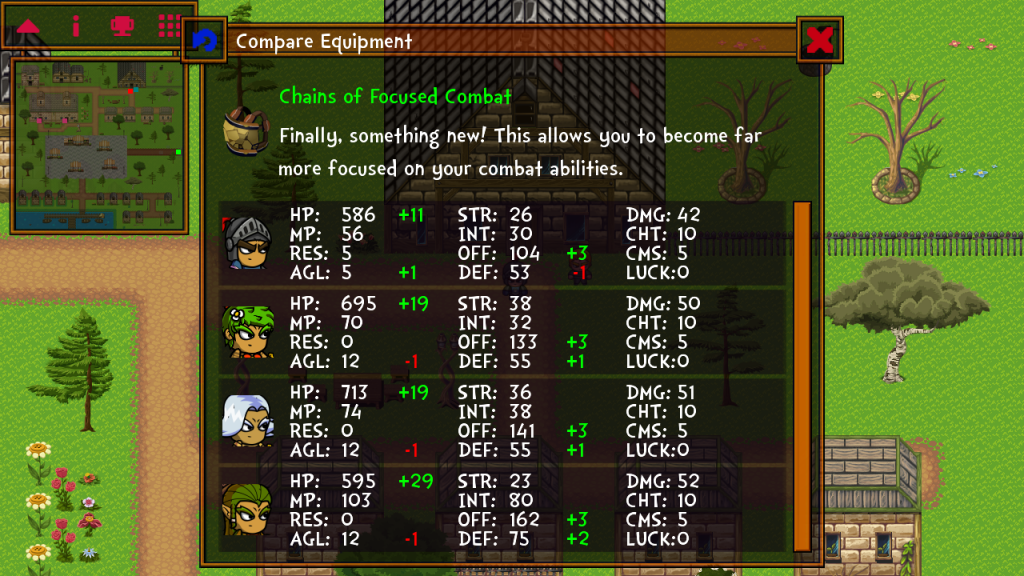 Next up is the new combat status window for afflictions. I recently did some work with afflictions (bad stuff) on your characters during combat by adding little icons on the console showing you how long it will last on you and what there is. I didn't however provide any way for you to get details on what those might be. So this week I've added a new window that gives you a short description of each affliction. 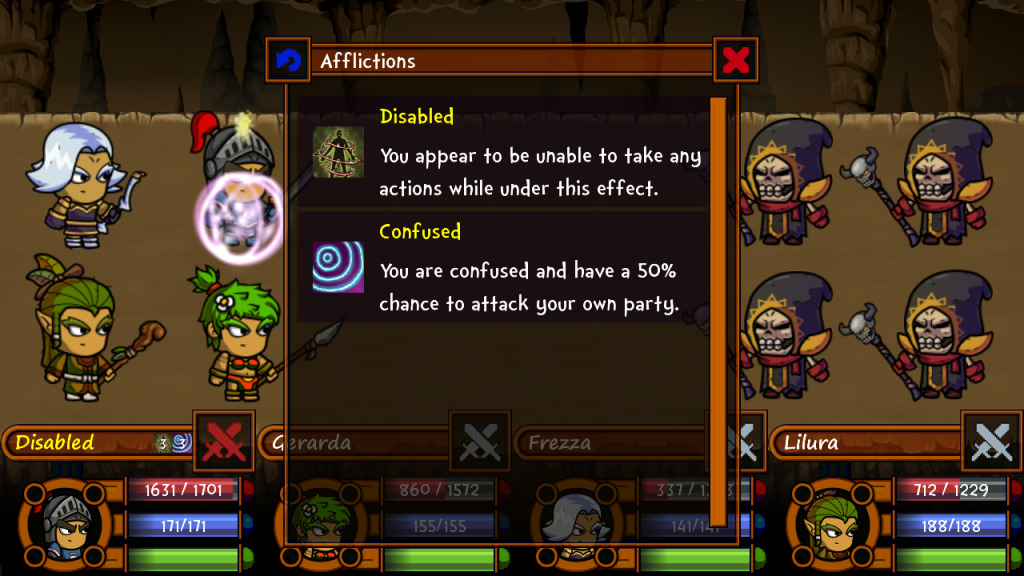 Previously when monsters spawned on the map they would sit around and not really be overly active. This week I decided to change that and make them move around a bit when they had room to (sometimes they spawn in places where they can't move, and thus won't still). This ended up with them being far less static and much more lively looking:

Then later in the week I decided that the direct left/right was also a little bit too static so I added a small (random) vertical incline/decline to their path making them a little bit better:

Our friends have names!

I’ve finally gotten around to giving our little friends the names and also came up with a short little biography for each one.

Short article describing the key parts of the new tutorial system that has been put into the game.

Short article covering several of the "spit & polish" changes made to Mischieviots in the lat few weeks.

This short article describes some of the most recent changes made to the inventory and vendor system in attempt to make the interfaces a bit more friendly...