Maximum Override is a chaotic city destruction game where the machines come alive. Wreak havoc in a fully destructible randomly generated city with anything you can find.

Check out the system requirements before purchasing! We are still optimizing the destruction physics

Maximum Override is a game that tasks you with destroying a randomly-generated city by possessing mechanical things like tanks, robots, and flying saucers. It's a cartoonish, over-the-top game reminiscent of the Rampage series, only here the destruction is granular and physics-powered.

Though the game debuted on Steam Early Access earlier this year, developer Alientrap has just revealed a virtual reality mode for the game, codenamed MaximumVR. Using a HTC Vive, players stomp around the city in first-person as a giant being, picking up cars and throwing them into buildings to smash them to bits.

Though you're larger than your surroundings, you're still not large enough to cross the entire city within the Vive's room-scale tracking space - so you get around instead by aiming at a spot on the ground and teleporting toward it. As your objective is to abduct certain characters, you'll need to do this to change after them as they flee the carnage and destruction you've wrought.

Eventually, the city will fight back, too. According to Alientrap, "Humans will eventually attack back with tanks, attack helicopters, and giant anti-kaiju robots. You'll defend yourself by throwing cars at helicopters, breathing fire, or just attacking with giant fists."

The developer is hoping to launch the VR mode by June this year. 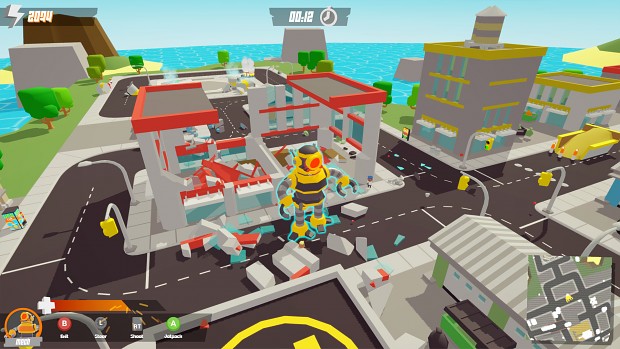