Masterspace v1.4 has been released, introducing liquid simulation and generation of trees and forests. It is now also possible to play team-based games and an improved death and respawn system has been implemented. New objects and goods include defensive turrets and electronic components. Additionally, two new music pices are included, as well as a lot of bug fixes and performace improvements.

Posted by MasterTechnologies on Jul 28th, 2012

Masterspace v1.4 has been released, finally introducing a long-awaited feature: liquid simulation. This allows planets to be filled with completely dynamic liquids, such as water and lava. The water simulation is mass-conserving, which means that no water is created or destroyed during the flow. There is also an implementation of liquid compression, which makes the water flow more realistic.

This version also includes generated trees on the planets, which may be harvested to fabricate wood boards. Consequently, the functionality of the photosynthesizer has been reworked to be able to fabricate any organic matter, including grass, wood and leaves. New objects also include defensive turrets, trading posts and electronic components. 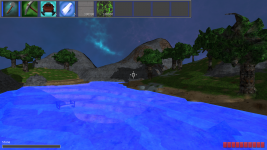 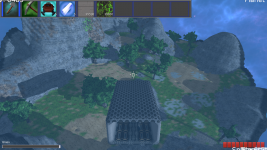 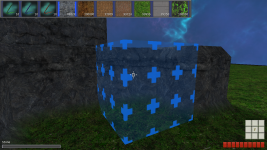 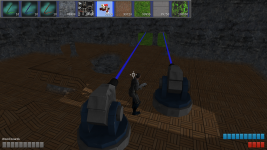 On the multiplayer side, it is now possible to assign teams to players and objects. This means that competitive play is now possible, with opposing teams starting on different planets, having ownership of their own constructed objects. Teams are also considered by the AI of e.g. turrets, when deciding what to target. There are also hostile turrets occupying neutral planets, so prepare to meet some resistance when expanding your sphere of influence. A hint is to mount turrets on your spaceship before exploring the universe.

To upgrade to the full version (for paying customers), please download and run this unlocker (requires login). Please note that the unlocker is version specific and you need to run this after the v1.4 installation, regardless if you have installed another version of the unlocker previously.

Additionally, two new music pices are included and a marker for deposition of materials has been implemented, which makes it easier to place blocks correctly. As usual, a lot of bugs and crashes has been fixed and the performance has been improved. For a complete changelog, please see below:

An update to version 1.4 has been released, which fixes the excessive amount of sand on the planets.

Download the version 1.41 patch for the free version here (requires that v1.4 is already installed): www.master-space.com/MasterspacePatch1.4to1.41.exe

The patch for the full version may be downloaded here (requires login): www.master-space.com/protected_files/MasterspaceUnlocker1.41.exe