A cultural shift known as The Glitterati Movement began to gain mainstream attention in the early 21st century. The movement represented a radical change towards self-serving attitudes, ramped materialism, abuse, and the glorification of brutal acts of violence. The revolution began as many do, in an attempt to subvert any and all organizations in power that dictate the way people live their lives. Eventually the world's companies saw the potential to capitalize on the latest fad as they promoted guns, violence, glamor, and surreal fashion styles. Driven into disconnection from their fellow man, people to adopted the next big thing; "Everything".

Fiendish, inhuman corporations peddled newer and newer must-have technologies, fashions, and attitudes. Product driven tribalism was growing amongst the world's populace. These corporations took advantage of their customer's loyalty by promoting violence towards other corporations’ customers in order to wage passive economic wars.

Meanwhile, crowd-sourced technological advances in science and medicine lead to great advancements in the fields of space faring. This crowd-sourced publicly and privately funded space travel would go on to damage the Earth's upper atmosphere. The practice that was dubbed "Bootstrapping" became more common as the secrets to solar travel were harnessed. And a grand machine was constructed in the northern midwest.

This tower-like machine was constructed in the city of Detroit-Windsor, a seemingly the perfect location to place such a device. It was built to subvert the sun's harmful rays from penetrating the newly vulnerable atmosphere. Built to fire energy directly at the sun, The Sunrod, as it was later called was installed and constructed on Belle Isle. It served as a symbol of hope for better times not only for the American city of Detroit-Windsor, but the world.

To welcome in the New Year of 2035, The Ball was dropped on The Sunrod. But this time, the New Years Ball was the prismatic crystal needed to focus The Sunrod. At 0:00 on January 1st, 2035, The Sunrod would bring darkness, torrential storms, and an endless sea of clouds in the upper atmosphere of most of the world. The areas not effected by electrically charged ionized cloud-cover were looking at prolonged exposure to types of light energy never before experienced by human flesh.

Our story revolves around those near “The Eye”. Detroit-Windsor. 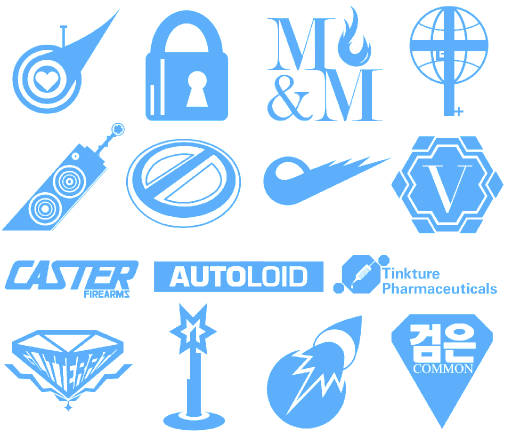 Mechanics (Combat)
•Twin-Stick Shooter
•Projectiles and abilities of both Players as well as enemies are created with beat of the music (BPM).
•Bullets move at a visible rate, and can be avoided

Mechanics (Non-Combat)
•Jumping and rolling can be used to traverse the environment or avoid enemy fire
•Object Interaction. Some objects can be interacted with using the [Back]/[Select]/[Enter] inputs. This includes sitting in chairs, examining scenes, playing an upright piano, or any unique interaction.
•Scripted Events and Player States (highly tied into Object Interaction).
•Dialog; textual and spoken.
•Two player arcade mode. Players can choose to play any of the five main characters. (Mai Justice, Padlock Girl, Cheiron Law, Maggie & Margarine, Jesca Hitomi)
•Game is treated as if it were a television show, as in Sakura Wars; So Long My Love

Campaign Story
•Near Future (2035)
•American City (Detroit-Windsor)
•Story of one girl’s survival and a late coming of age.
•Pop Culture in terms of music, fashion and design aesthetics inform the attitudes and feeling from the characters, environments and objects.
•Space Faring in its infancy, does not play an active role in the story. Known as "Bootstrapping".
•The Sunrod was created to stop harmful radiation from entering the atmosphere due to Bootstrapping. 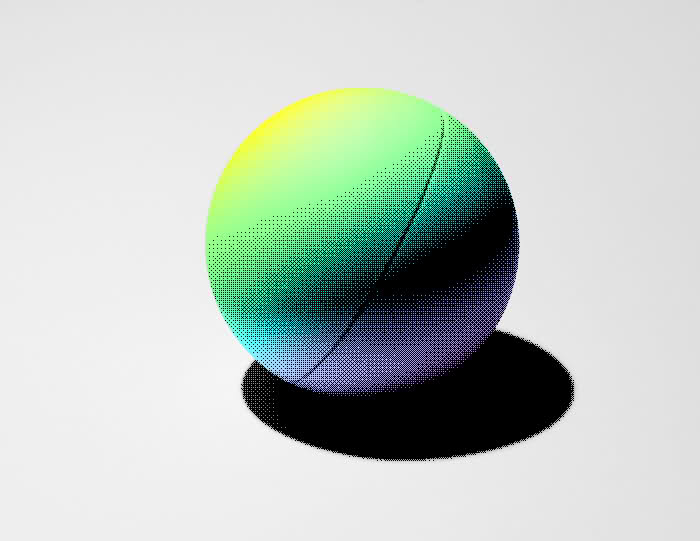 Origin
Mai is a Detroit-Windsor native and Native American. Mai was influenced by the Glitterati Movement as much as any other normal person, yet she maintained much of the teachings that her mother and grandfather taught her.
She is very much influenced stylistically by pop culture, yet she had a great interest in all forms of storytelling. This interest she first found when listening to her grandfather’s tales of his life, and some of the folklore he knew.
Mai’s mother was rooted in tradition, much like Mai’s grandmother. Mai’s mother (Diana) would read to her every night when she was growing up, again enforcing the interest in storytelling.
Mai is a consumer of all forms of media, and powerfully critical of things that have no soul. She never bought totally into the entirety of the Glitterati Movement, learning to play an instrument was something that was becoming less important in the Glitterati Movement as much of the instrumentation was synthesized. This was one of the many ways she made Glitterati work for her.
Growing up in the digital age, Mai also had an aptitude for electronics, but made it her hobby to instigate and experiment on the earliest era of the age. Mai has a passion for fusing e-waste, old long-forgotten electronics to create devices she took pleasure in rebuilding, or more likely, creating something new. As someone who was musically gifted, she wanted to find what beautiful and unique sounds each chip might make when lovingly placed on a breadboard.
Current Life
Mai is 20, and has been working at one of the many FASHION shops in the Detroit area. After most of the locals, including her mother and grandfather died to the lightning storms or radiation, Mai began to live there. As the year progresses, she finds it convenient that a gun store shares the same block as the FASHION shop… and, being a musician, tinkerer, as well as having the need to survive skirmishes with madmen, Mai created her perfect tool.

Character Traits
Unique love for computer chips, and forcing sound out of them.
Fascination with old legends and fables.
Mai was employed one point, at the FASHION shop in which she now lives. The outside of the shop still displays mannequins wearing lavish and outlandish designs. Though the sign is worn and the windows smashed in the merchandise remains largely untouched. Mai has turned the checkout counter into a makeshift lab where she collects and keeps her breadboard projects.
Physical Traits
Age: 20
Height: 5'8"
Weight: 128Lbs
Gender: Female
Ethnic Origin: Native American - Ojibwe
Hair Color: Black
Eye Color: Green
Shoe size: 7
Body Type: Quite Fit
Scars: Small and burns scars on her hands from various failed projects involving electrical overload... or forcing bits of metal into unusual positions.
Other Features: Blue, self illuminating war-paint across her face. The ends are squared off. On the left side of her face, an extra bit of paint is in a triangular shape, and leaves that side at an angle.

Combat Style
Mai is a fast learner. After discovering an AK47 on the body of some fallen goon earlier in the year, she has become a fairly competent shot. She’s also heavily modified this weapon to fit her personal style, love for music, and fashion sense.
AK47
Mai's gun is something to see. At first it appears merely as a custom painted weapon, but upon closer inspection, one would notice the obvious modifications... most notably the guitar pickup and strings on the left side of the rifle. The rifle is used in tangent with the amp she always keeps with her.
Amp
Mai always kept an amp with her in her car before The Great Calamity. She now keep one with her at all times, on her back, with the power source kept in the space behind the speaker. This is also where Mai's modifications to the system is stored as well.

Her preferred amp has a heart-shaped speaker that glows cycling colors as sound emits from it. 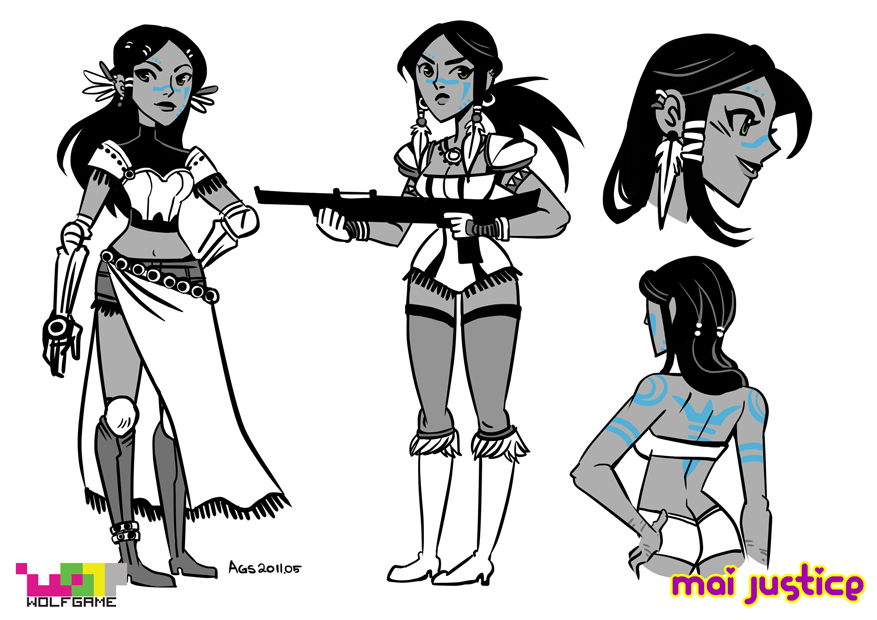 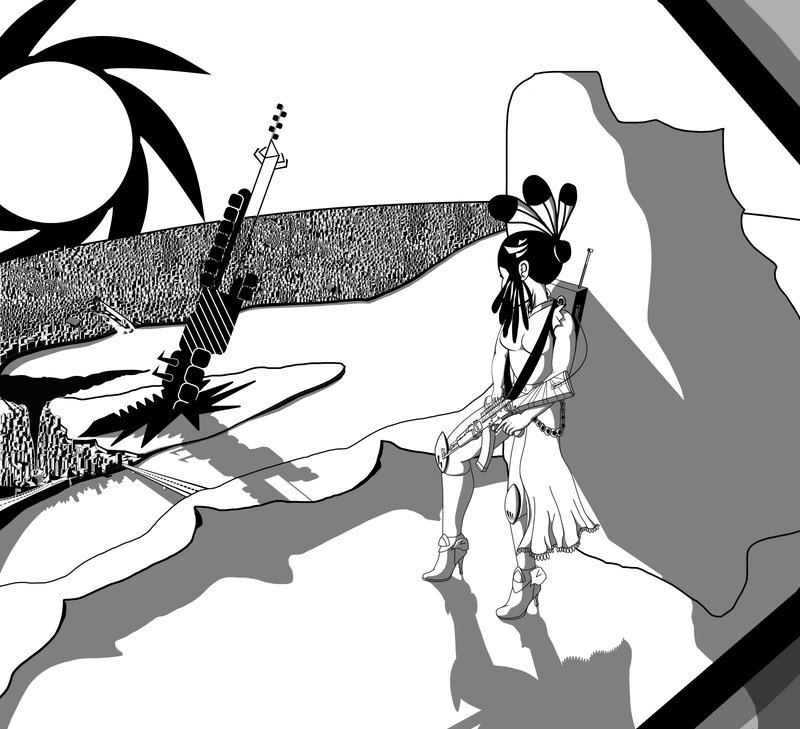 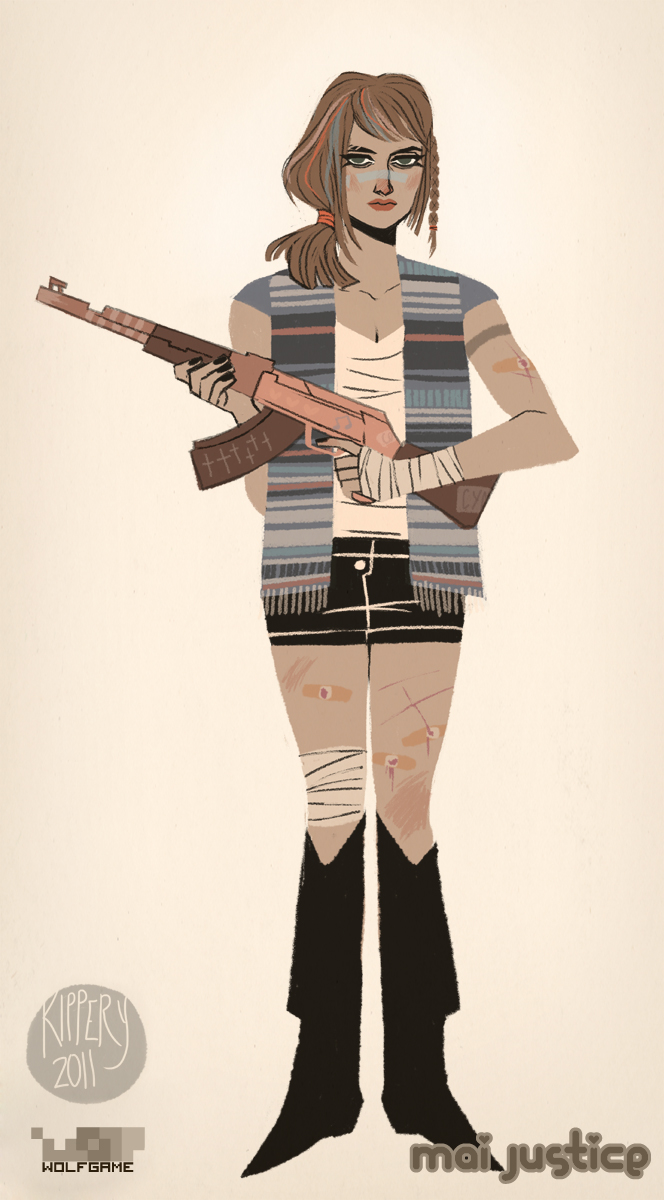 The team openings are as follows;
Traditional Artist~(1 Slot)
•Must be able to show an eye for graphic design, fashion design, and have the ability to create expressive pieces.
•Have an interest for pop-culture and keep up with the current trends.
•Self-start concept art for the whole world of Mai Justice with little overt direction.
•Be willing to work with the Wolfgang (me!) to concept the world and characters.

3D Artist or Animators~(2 Slots)
•Must be a proficient modeler and texture artist.
•Have the ability to creatively
•Must be able to rig and animate.
•Must show an ability to create very exaggerated cartoon animations
•Must understand sexuality and modern gender issues in the games medium.

Compensation.
Monetary gains from the project will be evenly divided among the remaining team members at the time of publishing to download services, and limited retail.
Willing to negotiate. 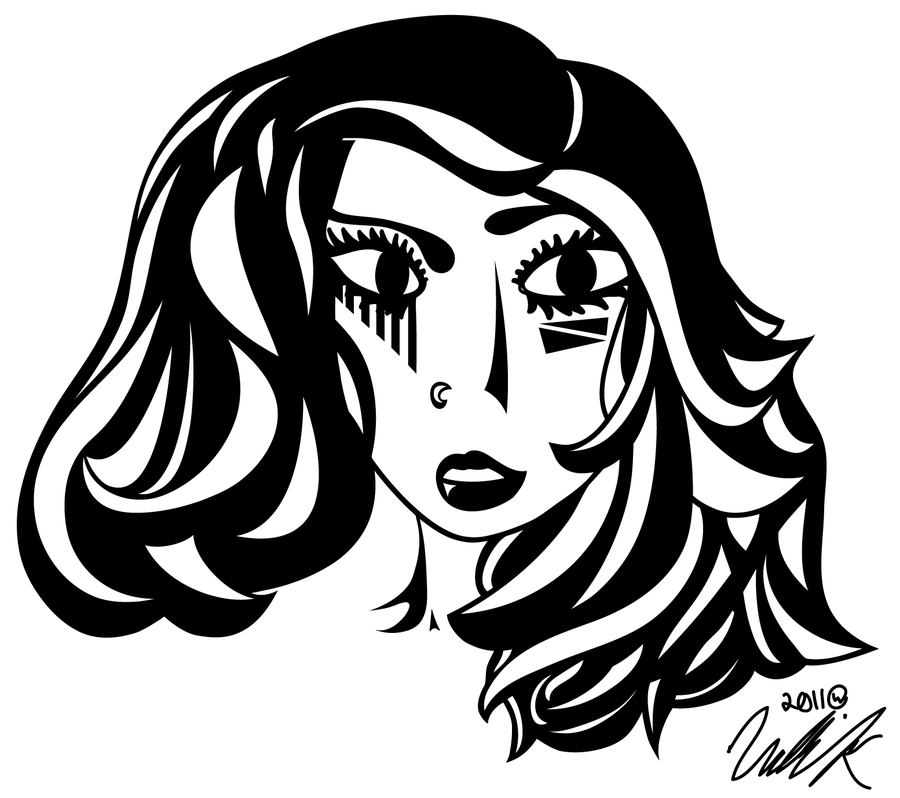 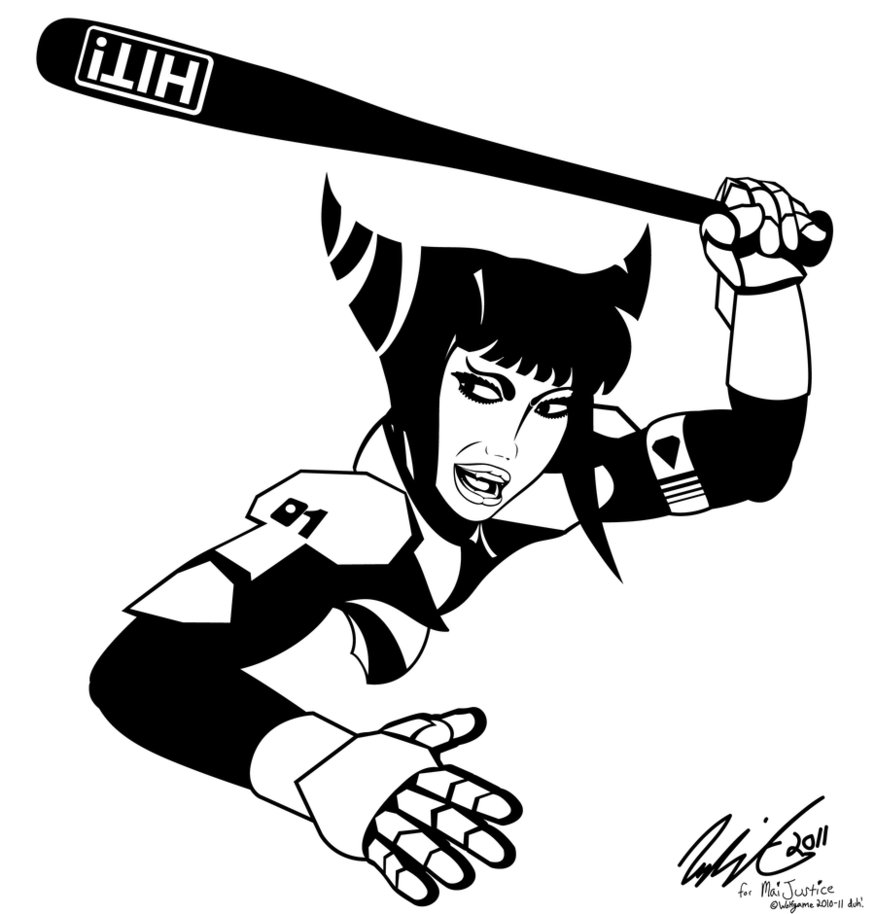 Looks pretty damn clean already! Off to a good impression.

Thank you very much.
There should be some more news after this coming weekend.

"Must be comfortable with sexuality (just sexuality in general), and expressing it in a creative way."

It's just that certain aspects of the game involve treating sex and sexual appeal in a very particular way. Having a good understanding of some of the general nuances would be advantageous to the look and feel of some characters and situations.

•Must love Steam, and be willing to incorporate the SteamWorks API into the final product.

So you'll release a Steam-free Linux version as well? (-:

I can't say for certain at this point, as we will be using Unity for development.

I see. I was just curious about having Linux on the list of supported platforms (-: