Developed by the videogames studio Flying Beast Labs, Magic Twins is a 1-2 co-operative arcade puzzle game in which Abra and Cadabra (the titular Magic Twins), must constantly swap their chromagic powers to defeat hordes of color elementals and stop the Colormageddon (which they unintentionally unleashed). Red beats red, blue beats blue.. you get the drill. Magic doesn't need to be complicated! But spells are not enough! Communication (and probably some yelling) will be invaluable to overcome all the challenges ahead of you: different objectives per level, bosses, multiple game modes, special events… Don't worry, we're sure you'll get some cute skins along the way. Finally a game that uses magic to combine the best of Puzzle Bobble, Plants vs Zombies and Overcooked with a spooky kawaii visual style!

The Magic Twins project was born in late 2018, as a mobile game, following a personal idea of our programmer Diego Santiago. In its first prototype, the game was going to use… frogs! Frogs, moles, gnomes, food, hammers, fair hooks ... Not the clearest thing ever, to be honest. Over time, the idea was diverting towards fruits and vegetables, with the temporary title of "Fruits Revolution" (although we considered to keep the code name of the project "Diego's Balls"). It lasted only a little, but we will remember it forever! 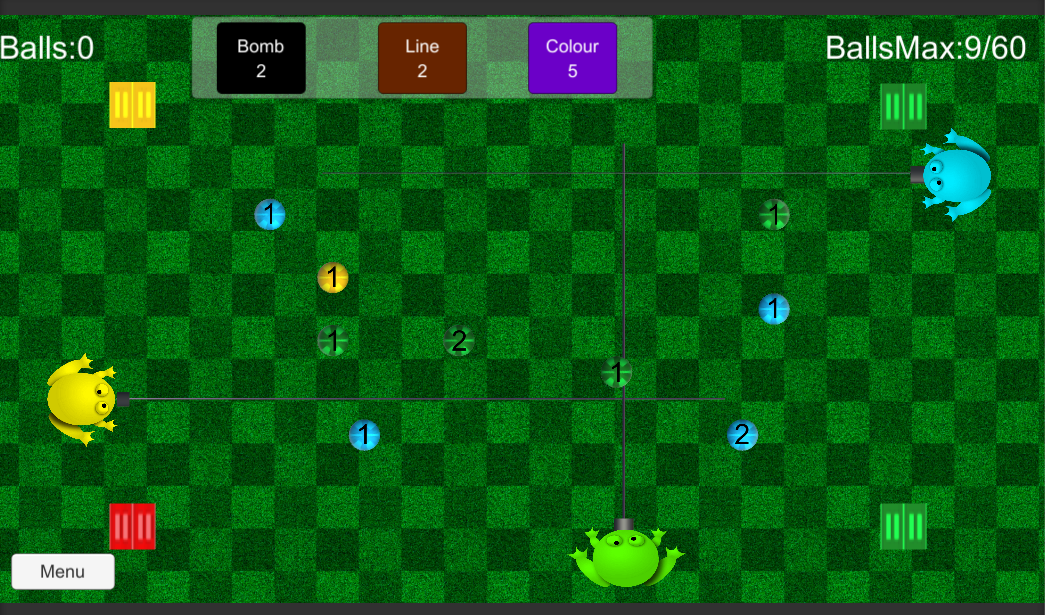 In the original idea, the game consisted of three shooters that threw balls (of Diego) to the numbered elements that appeared randomly on the stage. However, for gameplay reasons, it was reduced to two and a central crack was added that spit enemies periodically.

The artist Leyre Granero made the initial designs of the map and its grid, and little by little, the visual identity of the game was developed. All applied to the playable elements: enemies, shooters, special abilities... to achieve a consistent style. At one point and without knowing why, magic entered our lives.

Why not witches and elements? 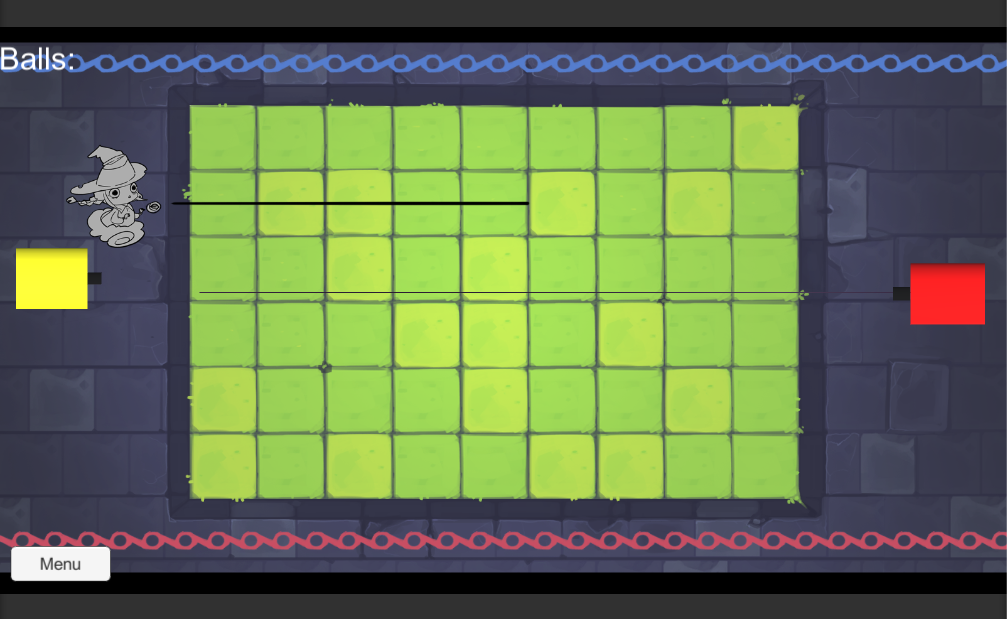 Another prototype of "Diego's Balls" was underway! This time the shooters attack would be carried out by elements (water, air, fire and earth), and to destroy enemies you would have to shoot them with a opposite elemental spell (water beats fire and that kind of thing).

A list of 45 possible names for the game was also made ... among which was not "Magic Twins", but great hits like Symphony of Witchtruction, Spells like teen spirit, 2 witches 1 rift or Hechicería a muerte en Torremolinos. The gameplay and interface also went through different stages at this time, prioritizing the player's experience in the initial platform for which the project was devised: a mobile screen. The beginnings of Magic Twins focused a lot on the differentiation of elemental enemies, that could also have an evolved version. Anything from this list maybe rings a bell? 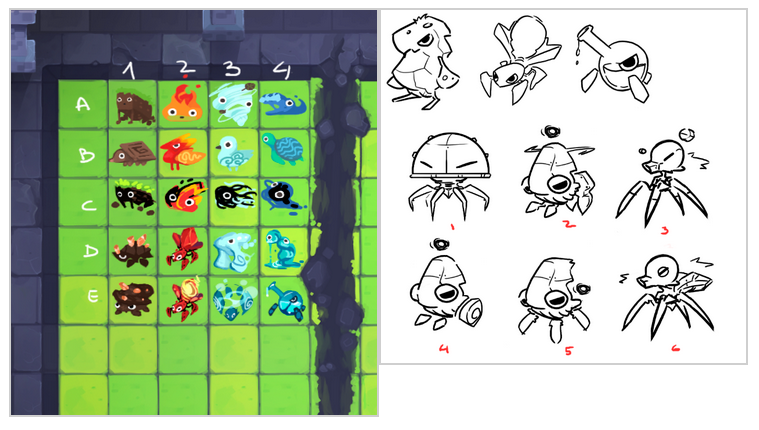 We worked with this prototype for several months, perfecting as much as possible the playability and developing a tutorial to make clear the mechanics from the beginning. The concept of the elemental wheel for the shooters it was a challenge in itself, since it was necessary to make clear to the player how to advance in the different phases in the least invasive way possible. 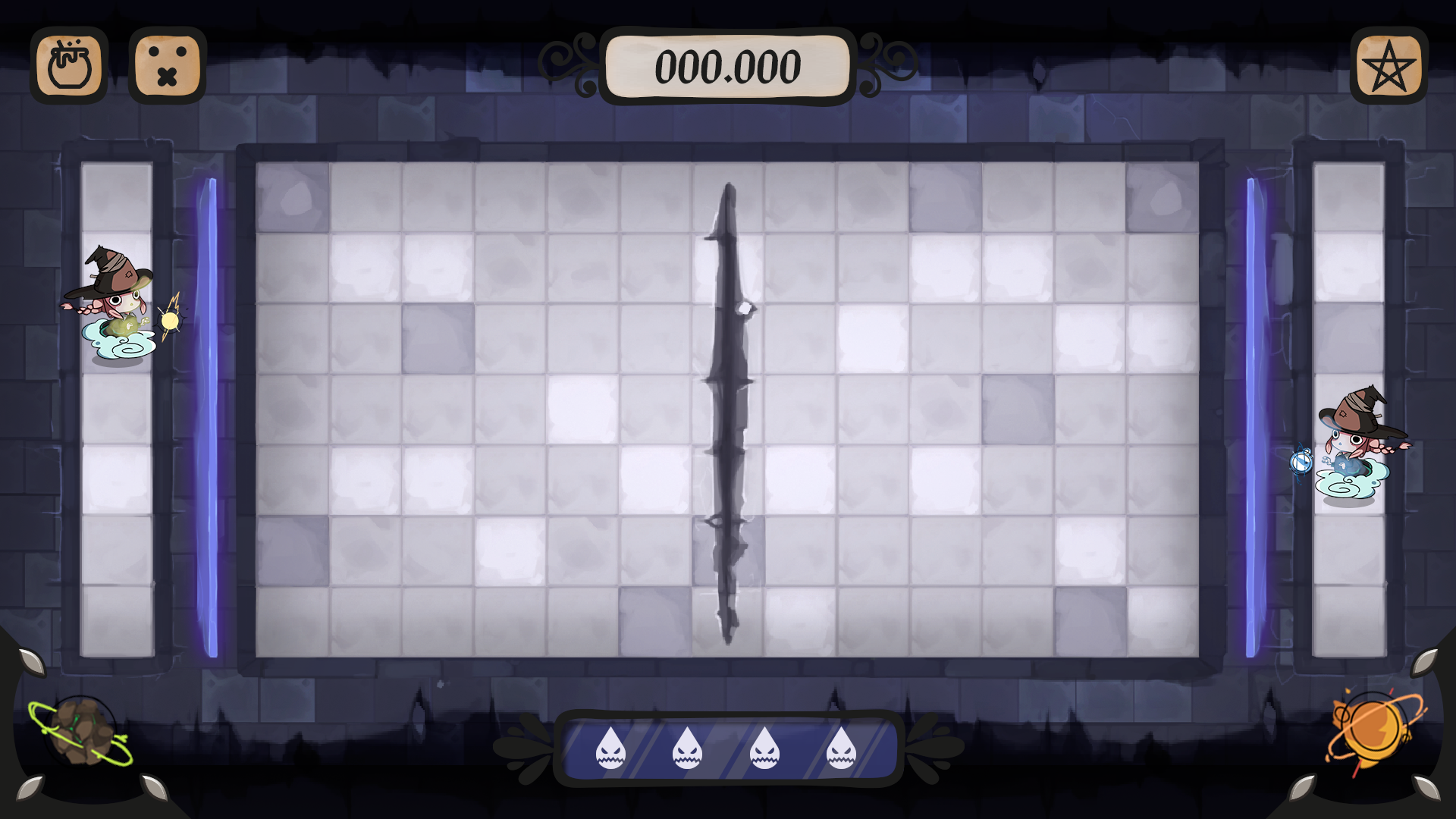 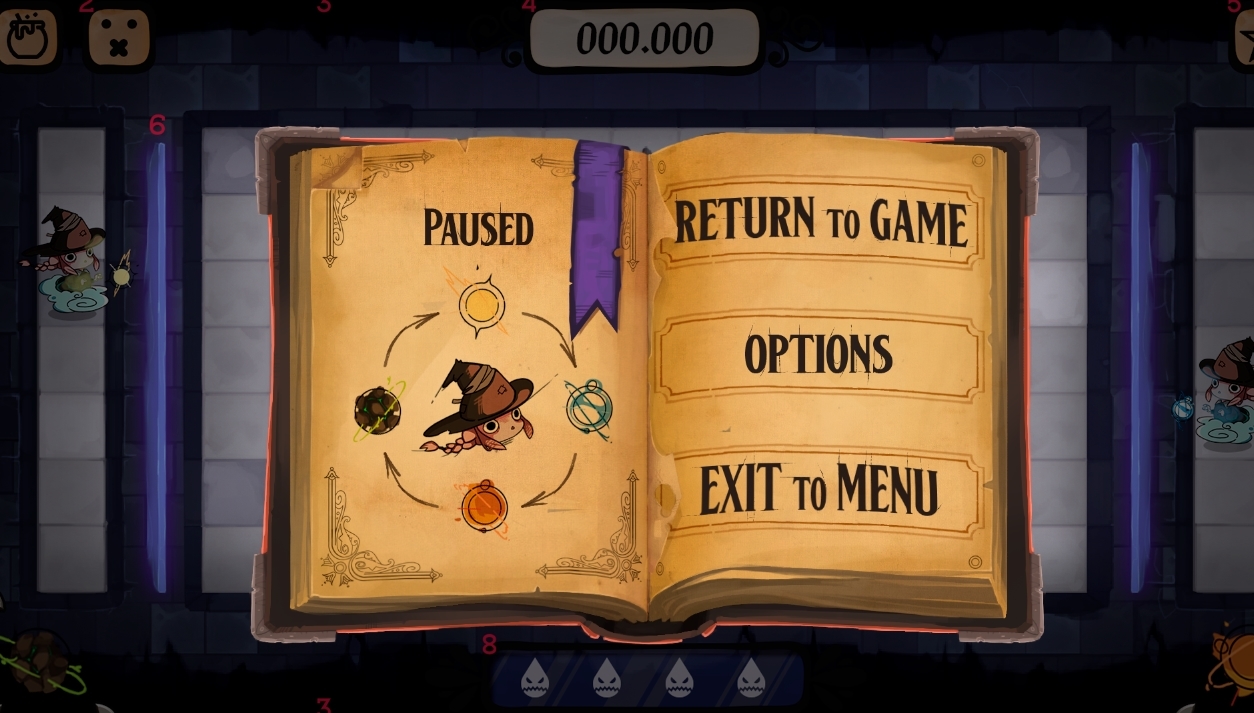 In January 2019, the project was definitely named as Magic Twins. Everything was going smoothly! A much more defined style was reached, which would be almost definitive and in which a clear evolution can be seen. Despite having the game base a bit more defined, something was wrong. The game did not quite meet our expectations on the fun department. 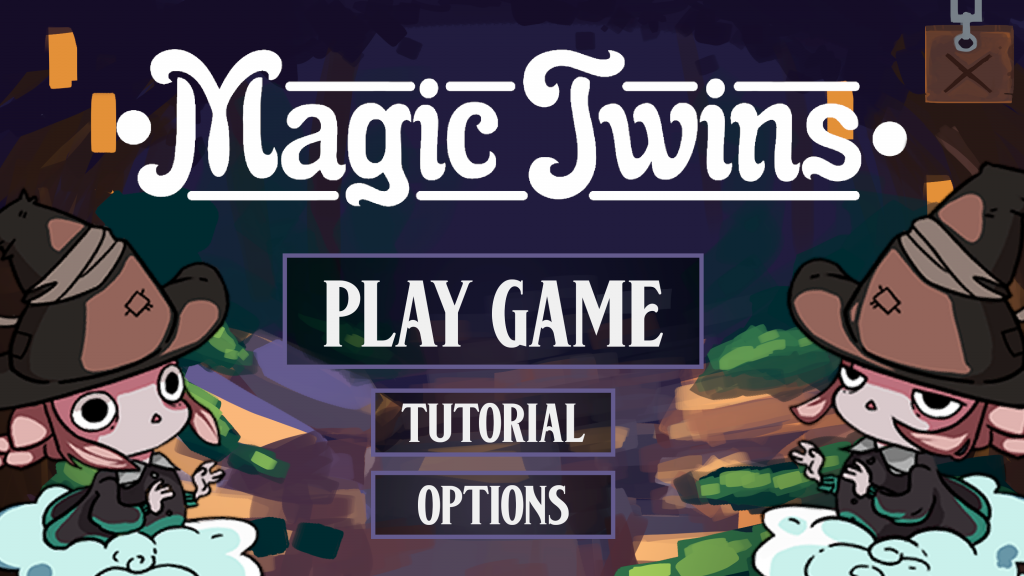 That's when our game designer Carlos L. Hernando He entered the project like a bull in a china shop. The elemental wheel complicated the gameplay. The game was already frantic in itself, and attacking with the opposite element broke the pace of the game.

So... back to colours! ¡Red kills red!Magic doesn't have to be complicated, after all!

The players had fewer things to think about and we were able to focus the gameplay and difficulty on the stage. In addition, we reduce the enemies to the round bottom flask, which had been with us since almost the beginning of the project, because, you know, we are a laboratory of scientific cultists.

On the other hand, two extra (Diego) balls were added so that the change between colors was even more dynamic. And multiple small mechanics to turn it into a more frantic but less punitive game.

The other big change came naturally. If there were two witches cooperating, the game was screaming to focus on the cooperative side. Back to work again! The possibilities were endless and all our Switches were plethoric. From that moment, the game was ready to be played with two controls. All this aiming to the Next Level Granada to put Coop Magic Twins to the test.

A series of mechanics were added that would force players to communicate with each other and we include many variations. For example, a game mode in which each player can only change the other's powers. 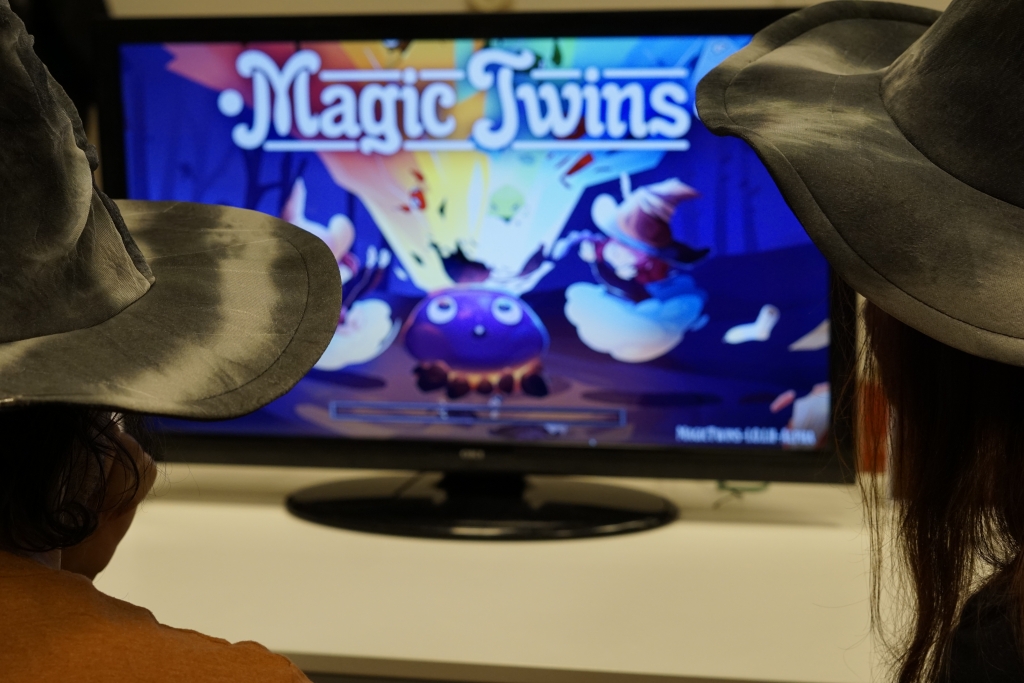 Would people like it? Should we start the project from scratch or even discard it? We travelled to Granada with enthusiasm and hope, And people liked the prototype! That day many people passed through our controls and witch hats, and the reviews were very positive.

“It's like Plants vs. Zombies, but better” – We should have write down the name of this person there, to be honest.

"Mind you, it can break eternal couples and friendships like Overcooked." – Laura Luna (who also talked about us in her podcast!)

The thing is, a very important point in the current version of the game is the cooperation, especially in the most frantic modes. The Granada players passed the challenge quite gracefully, and some even got hooked and they came to try it at different points of the day until they became pro players! You can watch some of the player's experiences on the game teaser trailer!

Meanwhile, we keep polishing the current version of the game, What will be the next chapter in the life of our little witches? We are looking forward to know more about that!