Another couple of days have passed and progress has been made. Here’s a little update about the intended RPG mechanics, menu-design philosophies and -- gasp! -- a new enemy.

Time for another update! As you might have noticed, the delay between my news-articles increases with every instance and this is something that surprised me myself. When I started game development in early April this year, I thought I would have nothing to show for a long time but after a breakthrough news would just be flooding out faster than I can type them down.

Well no, it’s actually the other way round. Currently my little game turned out to be more complex than I ever imagined despite my impression of it not being really interesting yet. At least I avoided one pitfall of freshman game devs and that is unmaintainable, unstructured spaghetti code. I consider it a personal success to be able to read and comprehend old code.

But I am sure most of you don’t care how well the code under the hood purrs along when you want to see some of it in action and you wonder what’s cool and what’s new with the game.

A rudimentary pause menu is in place when you hit [Num 0] during the game. Oftentimes I am annoyed by how bad console ports work on a PC (or vice versa) which is especially obvious in how the user interface behaves or what kind of input it accepts and handles. So my goal was to have my buttons and menu work just as well with a gamepad, keyboard and mouse. And you know what: It’s not that hard. As soon as I need it, I can easily expand what I got so far. I even added pictograms of XBOX360 gamepad buttons to my fonts so I can draw button-combination hints as easy as "Press "+button_start+" to play!", etc. 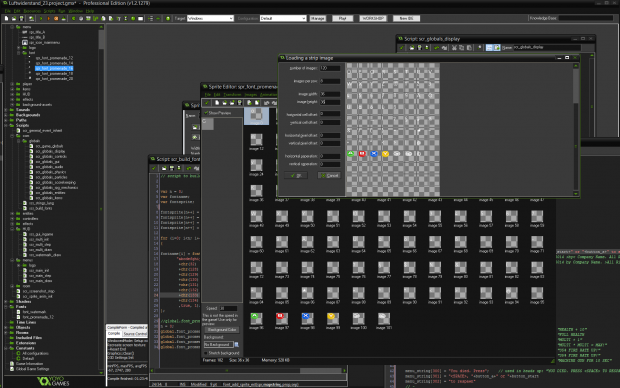 Even I get bored with the same old enemies I have flying around in my test-level and so I created a new one that’s a bit different. It spawns after a while, follows the player and takes quite a beating. But when it explodes it causes a chain reaction of deadly explosions. They still don’t look as nice as I want them to but after an afternoon with Audacity they at least sound punchy.

Yes, finally I implemented XP gathering and level-ups in the code, the latter with nice effects, a musical cue and some mechanics (a ring of bullets and full health!). And again I am at a crossroads for further development. Here’s the deal:

Initially I wanted the game to feature just a handful of level-ups until you get to final stage about an hour of gameplay later with the final boss. Ideally you should have all the important power-ups, advanced skills and perks to beat it. But over a coffee and a long chat with my friend Jot of ILIKESCIFI games, he suggested something more along the lines of Diablo where you on-and-off play the game and have a massive skill-tree to climb over the course of many, many stages you endure.

You can invest gathered upgrade points in either upgrades of your ships properties (maneuverability, speed, shield, etc.) or the score multipler to improve your high-scores or extra-lives which allow you to fail more often without the devastating loss of your spacecraft. So instead of just having up to an hour of “campaign”-gameplay, it would be possible to enjoy and explore the game’s mechanics for longer.

Of course, that’s a long term goal and we’ll see how feasible this turns out to be. I would be happy with a little campaign and/or and “endless attack” mode for players to enjoy.

Oh, and this time I even debugged (hopefully) and compiled a new alpha for you to play with. Enjoy!