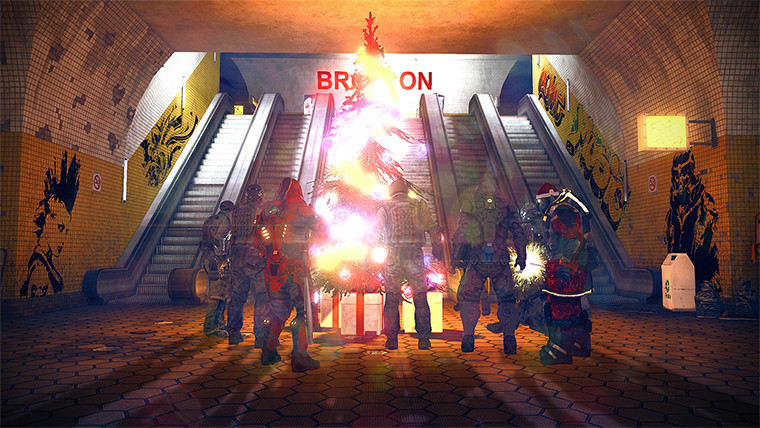 Christmas and New Year update
We congratulate everybody with the Christmas and upcoming New Year Holidays! Thereby, we announce new events:

• From the 27th of December until the 5th of January there is a holiday bonus: +100% exp and credits in all battles.
• Gift-bags will appear in battles, at which you can find fireworks and pieces of New Year Magic.
• On peaceful locations there is Santa waiting for you, at whom you can exchange pieces of New Year Magic to different items, including great blue grade weapons, Prime class armor and red Santa's hats.
• As well, you can buy from Santa unique new year items for gold and platinum:
FN-FAL – Unique assault rifle, applying damage with a large-caliber and piercing through the target. For gold and platinum.
• M202A2 Flame Rockets Launcher – a launcher with fire damage, which ignites the ground at the explosion spot. For gold and platinum.
• 5 new color paints for gold and platinum.
• And only for the holiday's time – unique helmet "Urukhai" for gold and "Ushanka – season winter 2015".
• Inside every online daily-bonus container at the holidays time you can find a snowball – a New year active item with interesting parameters. You can refill a stock of them at Santa's exchange for New year magic.
• And everyone, who'll meet the new year online (31 Dec - 1 Jan), will traditionally receive the "2015 New Year" medal to his profile!

PvP match making
• A new possibility to send uncertain selection of mercenaries to the match making queue. There are 3 modes:
1. The whole selected squad will be sent into battle, as before.
2. Any selected part of the squad, for which there will be found a proper battle, will be sent into battle.
3. There will be sent to battle the first mercenary from top, or 1+2, or 1+2+3. In case, if your mercenaries are not self-sufficient.
• "Power" growth decreased for level 12 and higher. ("Power" is a match making mercenary variable)
• "Power" growth decreased for high ranks.
• "Power" limit added: players with high "power" must break down into a more denser pile.

A new map: Sewers
The den of diggers and collectors: Sewers 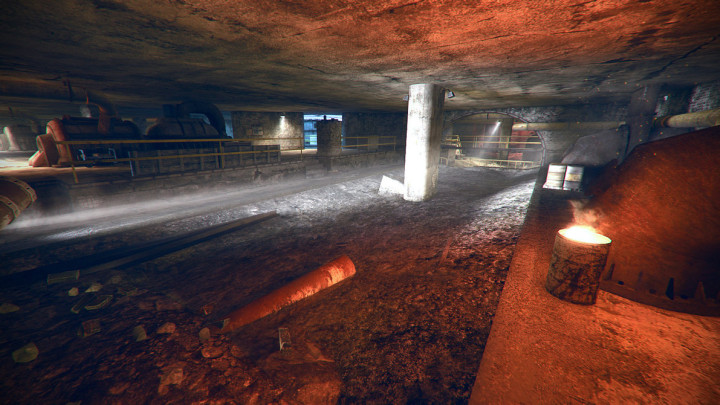 Changes in items and shops
• Gray weapon do not deal critical damage now.
• Prime class armors of 10th level were added to the rent-shop.
• MG-36 and PP-2000 were added to the rent shop.
• QBZ95B now exchanges for 50 anarchist tags (instead of 100 as it was before).
• The assortment of the premium-shop at the factory was cut.
• Hazard armors now disassemble not for 0 credits.
• New assault class helmet "Peacekeeper".

Improvements
• Now the time of events in the calendar is displayed in the local time.
• Pathfinding become more intelligent, now it finds the shortest way as possible.
• Chat messages will always get to the addressee (while loading a location, reloading, changing weapons and other cases).
• Clan icons returned to the turn-sequence list next to the nicknames of players in a battle, and also team names: A B.
• Now, at the beginning of a player turn, a corresponding sound plays again.
• Camera rotation when hold RMB is now more responsive.
• Now the chat panel does not hide the mercenary information at the battle.
• The party window is now shown in the battle. To leave a party, change the loot-share type or kick a player in the battle is not possible anymore.
• The campaign window was finalized, now it correctly displays requirements, which indeed needed to open the appropriate locations.
• The mercenary can now be rotated in the inventory and the fitting room by the pressed LMB.
• From territory captures and events, the random turns queue was removed.
• The warmup period should work now on the “Hunter” event too.
• The shop window was expanded.
• Santa’s hat and "Ushanka" helmet now support color customization.

Other fixes
• Various game crashes fixed.
• The incorrect display of some helmets in the battle preparation window was fixed.
• Rare issues with the display of active quests were fixed.
• Problems with movement ability in the battle were fixed.
• Freak mob miss-hits at melee combat is fixed, if their target is located higher.
• Damage amount is no longer displayed at grenade throwing crosshair.
• The inability to select a skill at the skill-tree was fixed.
• Achievements progress bar now displayed only in battle results window.
• Translation fixes for some beginner quests and items.
• The last seen enemy marker now dissapears if corresponding merc dies.
• "Missing Trophy" quest machinegun no longer drops from the mercenaries hands, if another teammate dies, who did not hold the machinegun.
• Various minor interface bug fixes and improvements.
• Merc model in the inventory window can’t die anymore

Replays
• All new replays are now playable.
• Replay crashes when using the time-roller was fixed.
• The player who recorded the replay is now always displayed with green color nickname. Others have corresponding colors as well.

After 1,5 years playing I'd like to say some words about this game. May be it is not worth at first glance but there are three huge issues: 1. You can not play without donation when you get to the max level. 2. Administration of the game is rude and unpredictable. You can be banned for no reason. Your account can be cancelled for no reason. You have no rights but have to pay cash for everything. More over you have no chance to challenge the decision as there is no address and any official contacts of the administration and developers 3.Administration of the project has friends among the players. These gays at in god mode. They can do anything they want without any responsibility. I think they don't have even legal software to do this game. So don't spend you time for no pleasure.

I rate this game a 10 its mad fun. It feels like fallout 1-2 but with good graphics and its mmo. you have my vote on green light guys.

plays nice and all, good job so far.

Looks very promising! Worth a try for sure.

I did a First Look video on PlayDB

Tracking for sure ! c:

the desc say it "Free2Play"

haha I first read that as "Free2pay"