It would be a film shoot at an average haunted location with no particular legend attached.

To finish shooting without a hitch and get an end result that was vaguely horror-esque...was all they wanted.

During filming, Mio gets separated from the group, and suddenly gets attacked by a mascot costume that has come to life.

From that point on, the trapped girls are at the mercy of numerous horrors throughout the hotel. Why is a mascot trying to harm them, and why have they been shut in to the hotel with no escape? Can the three girls escape from the hotel with their lives?

A member of the livestreaming group Nana Channel.

After seeing how withdrawn and lonely she seems, Nana and Asuka invite the friendless Mio to join their livestreaming channel.

While overcoming some of her shyness after joining in on the two's videos, she still prefers to work behind the scenes, without appearing on camera.

In the hotel, disregarding the risk to her own life, Mio rouses herself to save her friends Nana and Asuka.

The face and founder of Nana Channel.

While she originally started streaming reaction videos as a hobby, as her audience grew, she became more conscious of the number of views on her videos.

The filming and planning of her current videos reflects her new-found resolve that anything goes as long as it gets views. (Mio and Azusa always stop her before she goes too far.)

Her goal is to reach one million subscribers!

Gifted with brain, brawns, and beauty. She has a large number of female fans.

She has been friends with Nana for years, and the two are now inseparable.

At Nana's request, Azusa started helping with video editing and filming, but once Nana got it into her head to start raising her female follower count, Azusa was dragged into appearing in videos as well. Ever since, Azusa has been making more and more appearances in Nana's videos.

With a cool and mature exterior, she is the channel's mediator.

For some reason, she doesn't seem too pleased with the current shoot in the abandoned hotel... 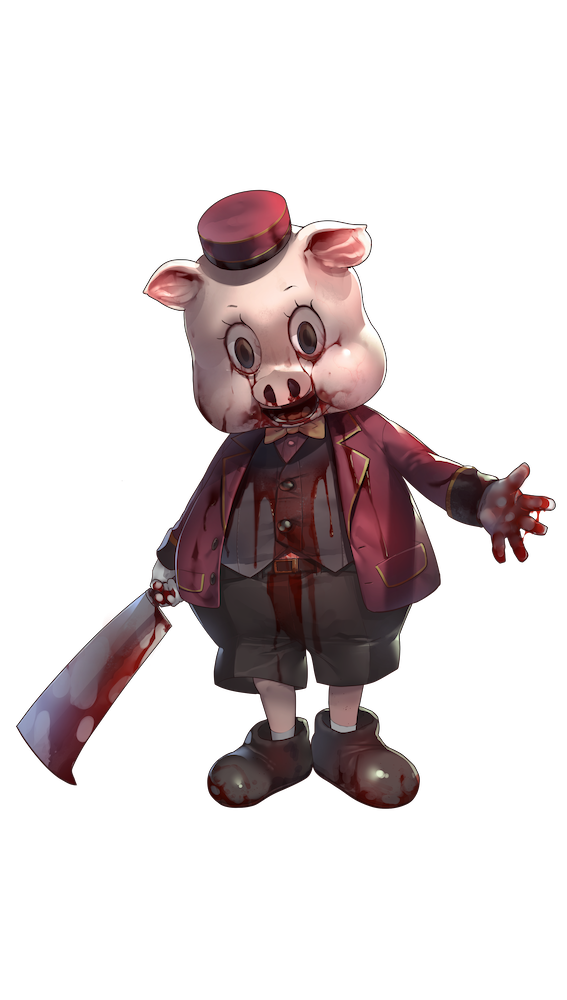 A mascot character who suddenly appeared before Mio and the girls while they were filming in the leisure hotel. He appears and disappears without warning, chasing the girls with a hatchet as his weapon.

Run from the mysterious mascot chasing you, and escape from the abandoned hotel! 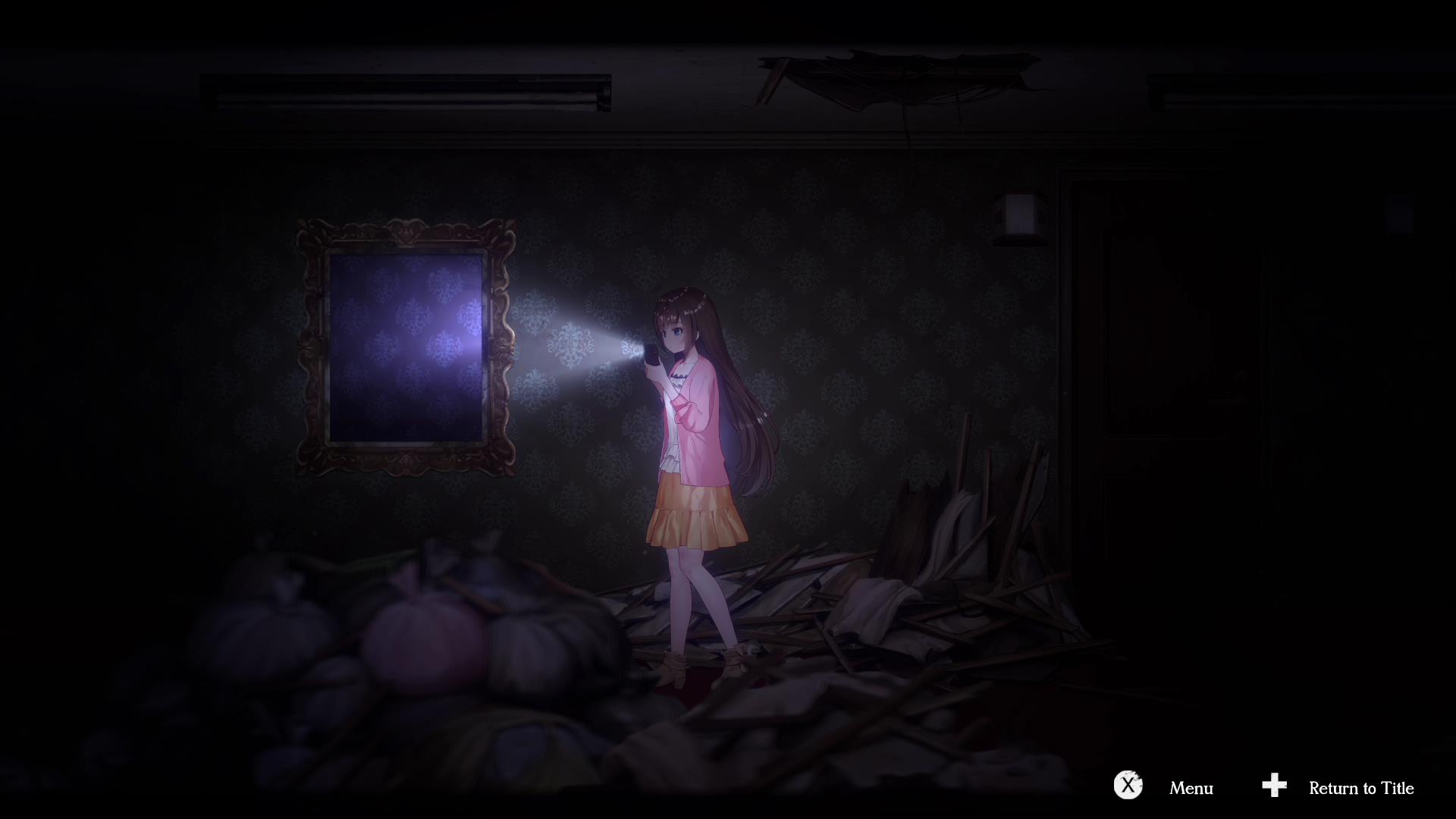 ▲While you are looking for clues on how to escape the abandoned hotel... 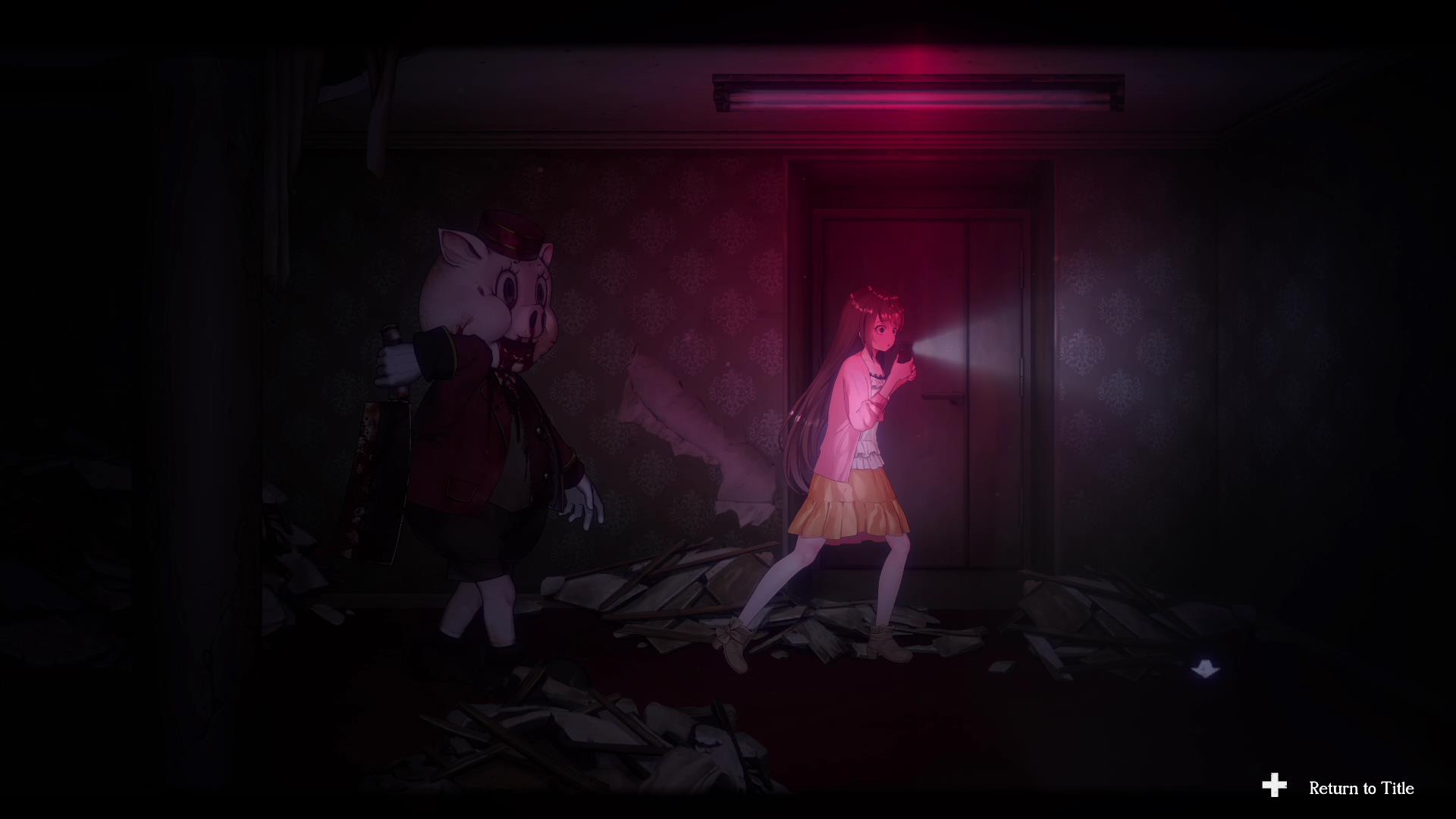 ▲Suddenly, a mysterious mascot character descends on the player! 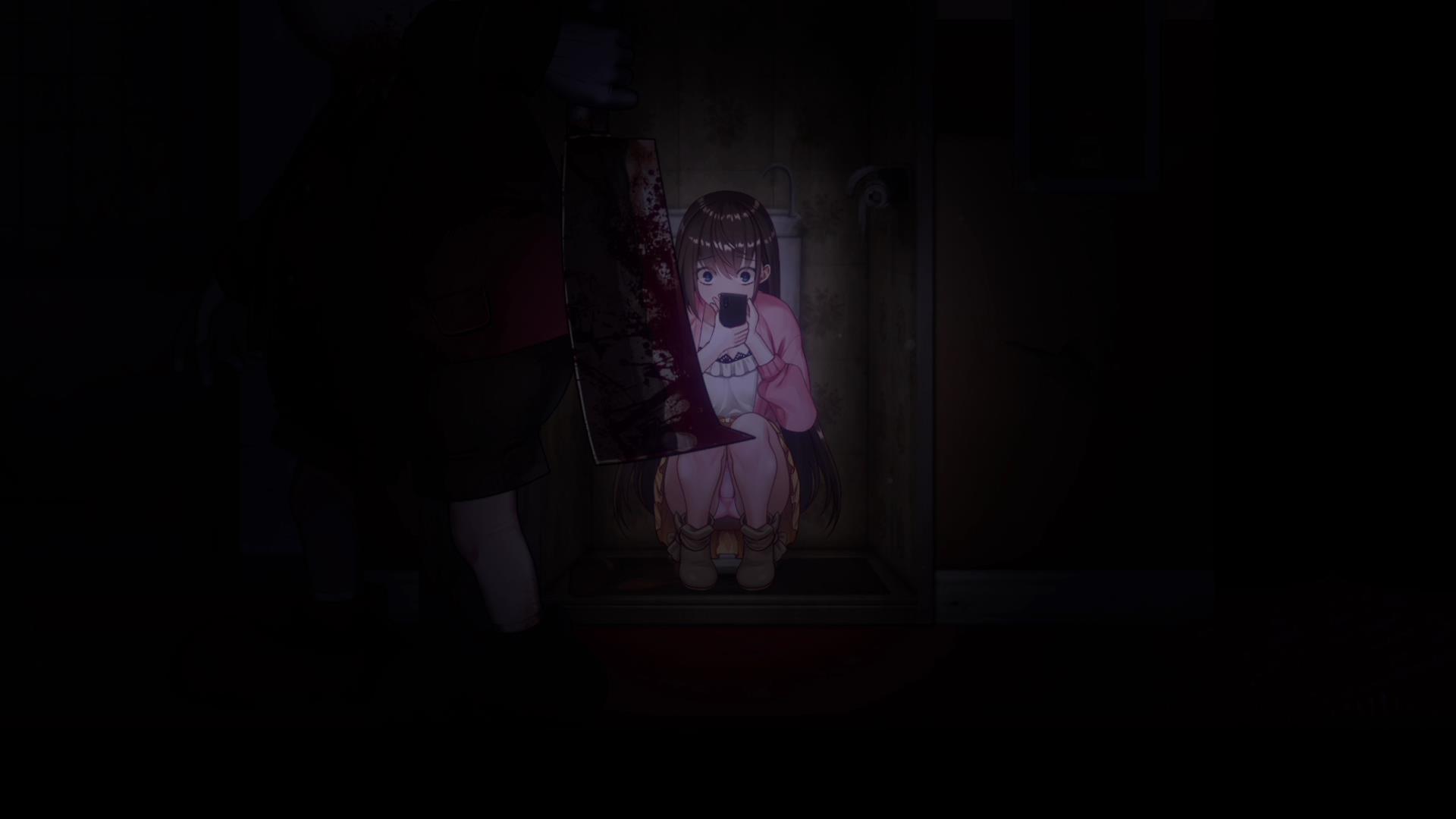 ▲Hide yourself, and run away from the mascot!

While exploring the inside of an abandoned hotel, a mascot swinging a bloody hatchet suddenly appears and starts chasing after the three streamers!

When you encounter the mascot, run away quickly, hide yourself, and escape from its pursuit. One hit from the mascot's hatchet will lead to instant death (game over).

Use hints and items to help you find clues on how to escape! 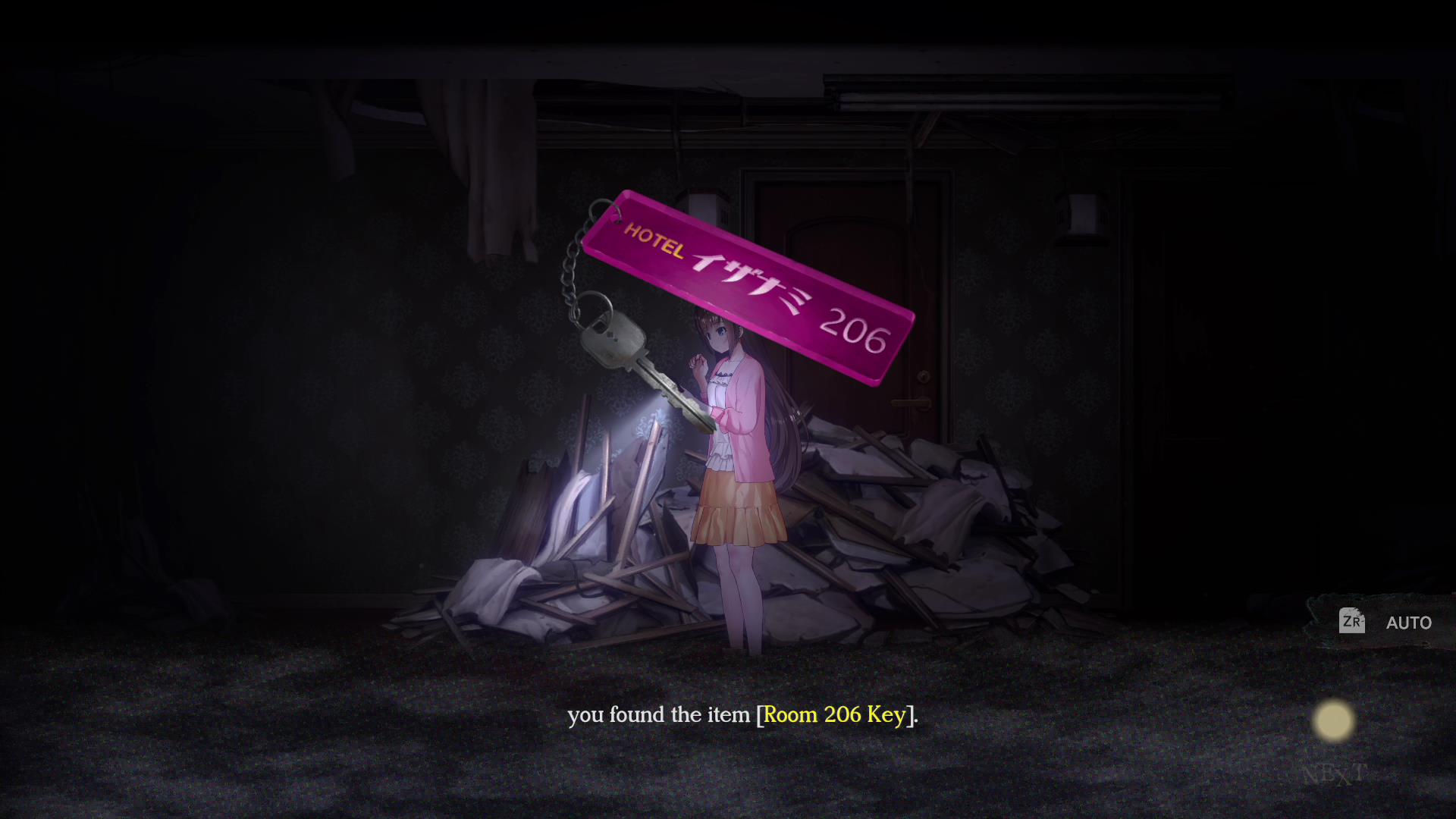 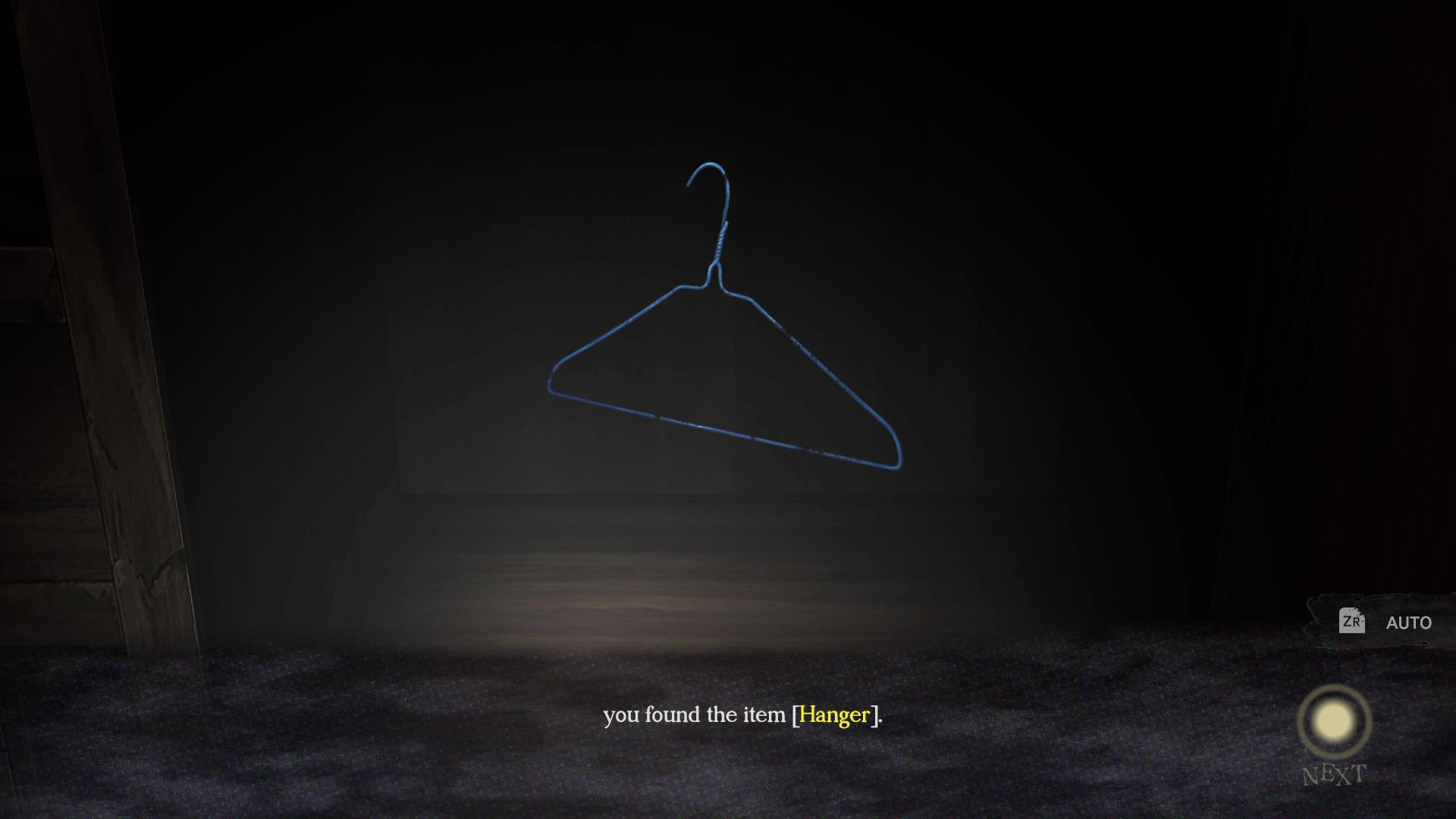 ▲While exploring the hotel ruins, you will come across various items and hints. Search every nook and cranny of the rooms to get items and hints that will help you survive! Some items will greatly change the fates of the girls... 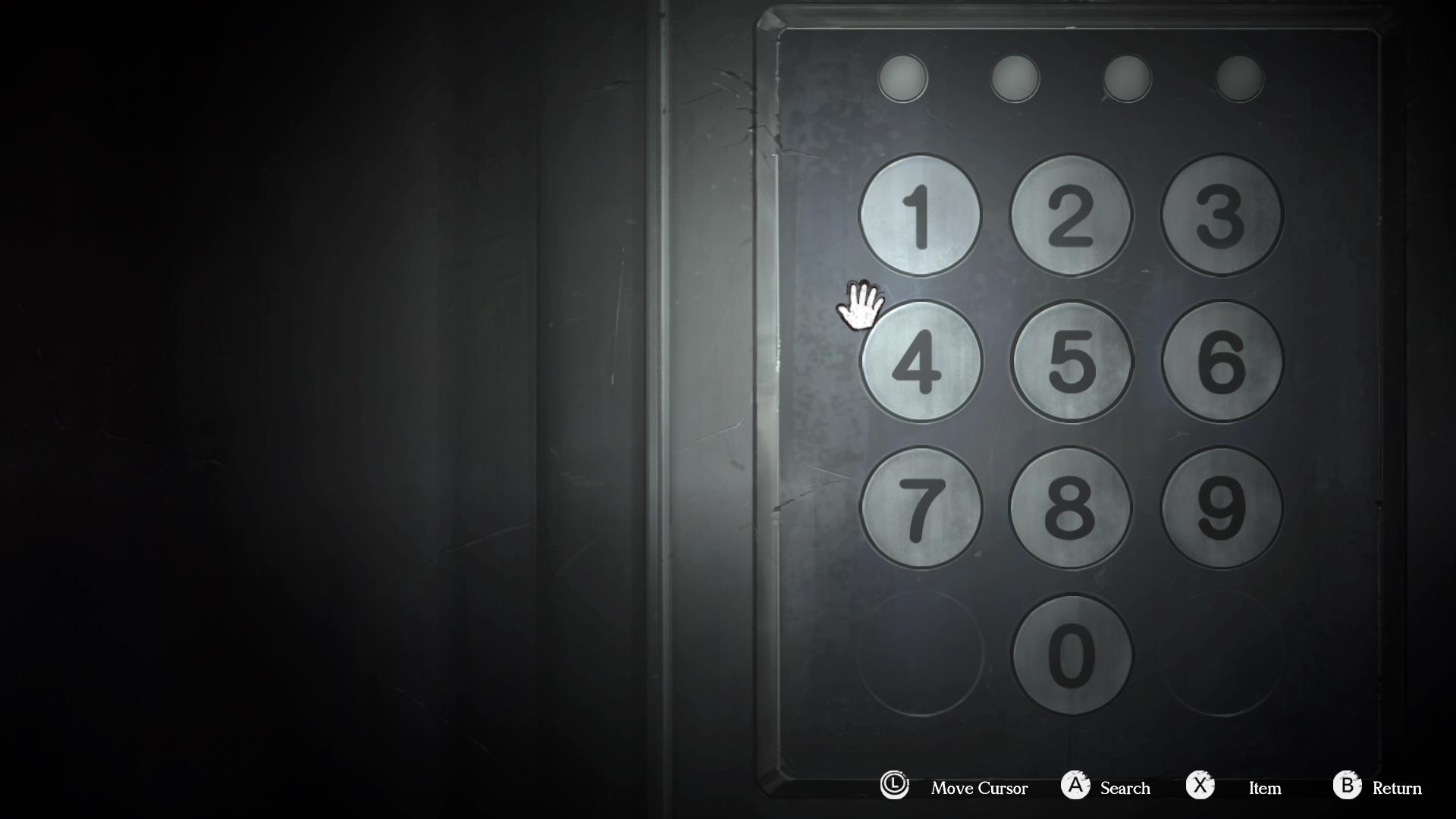 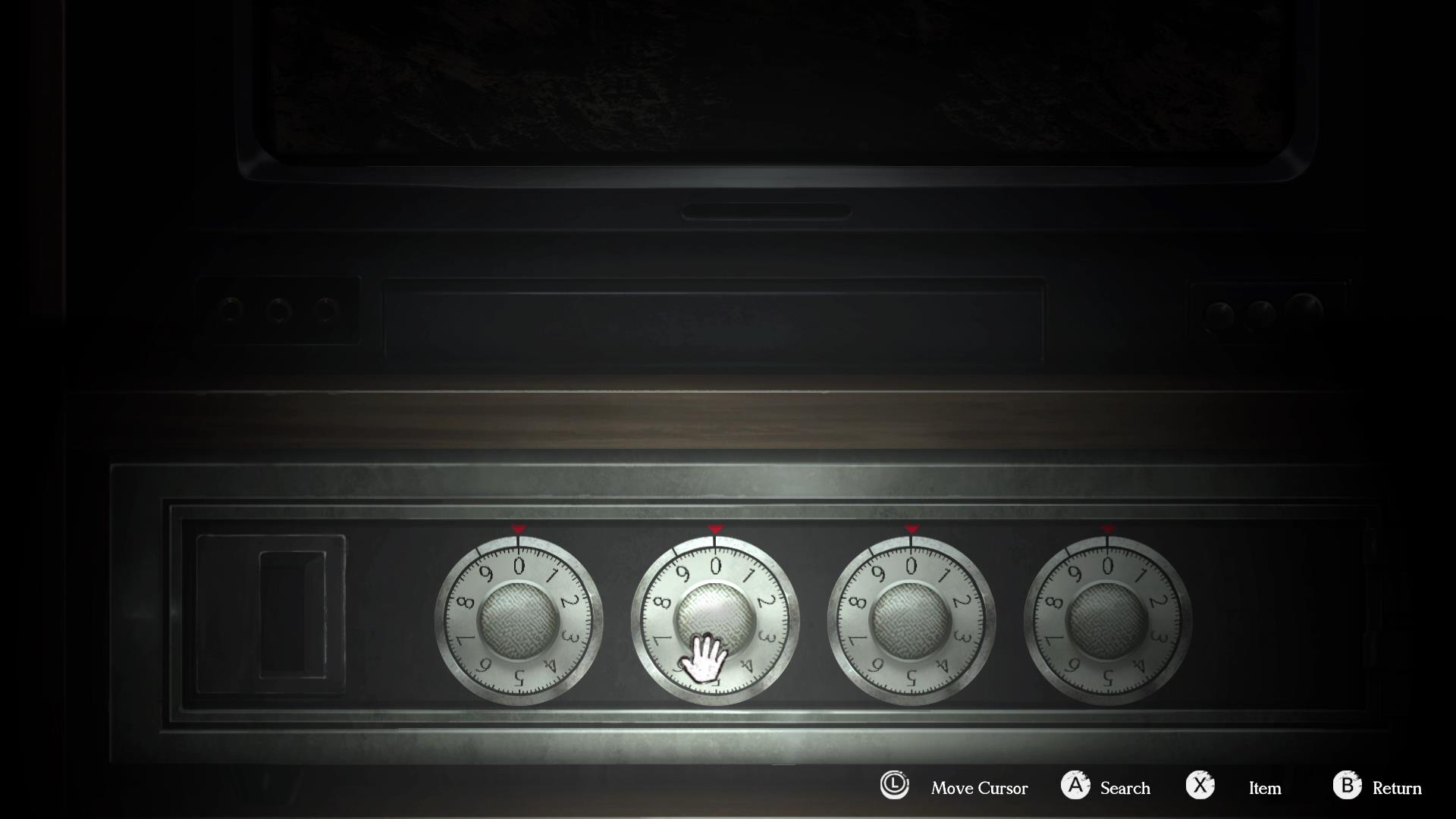 ▲To escape from the abandoned leisure hotel, you will have to solve many puzzles. Use the items you pick up, and hints as clues to solve them!

Is this a curse?!

The livestreaming girls are cornered by the descent of a life-threatening horror! 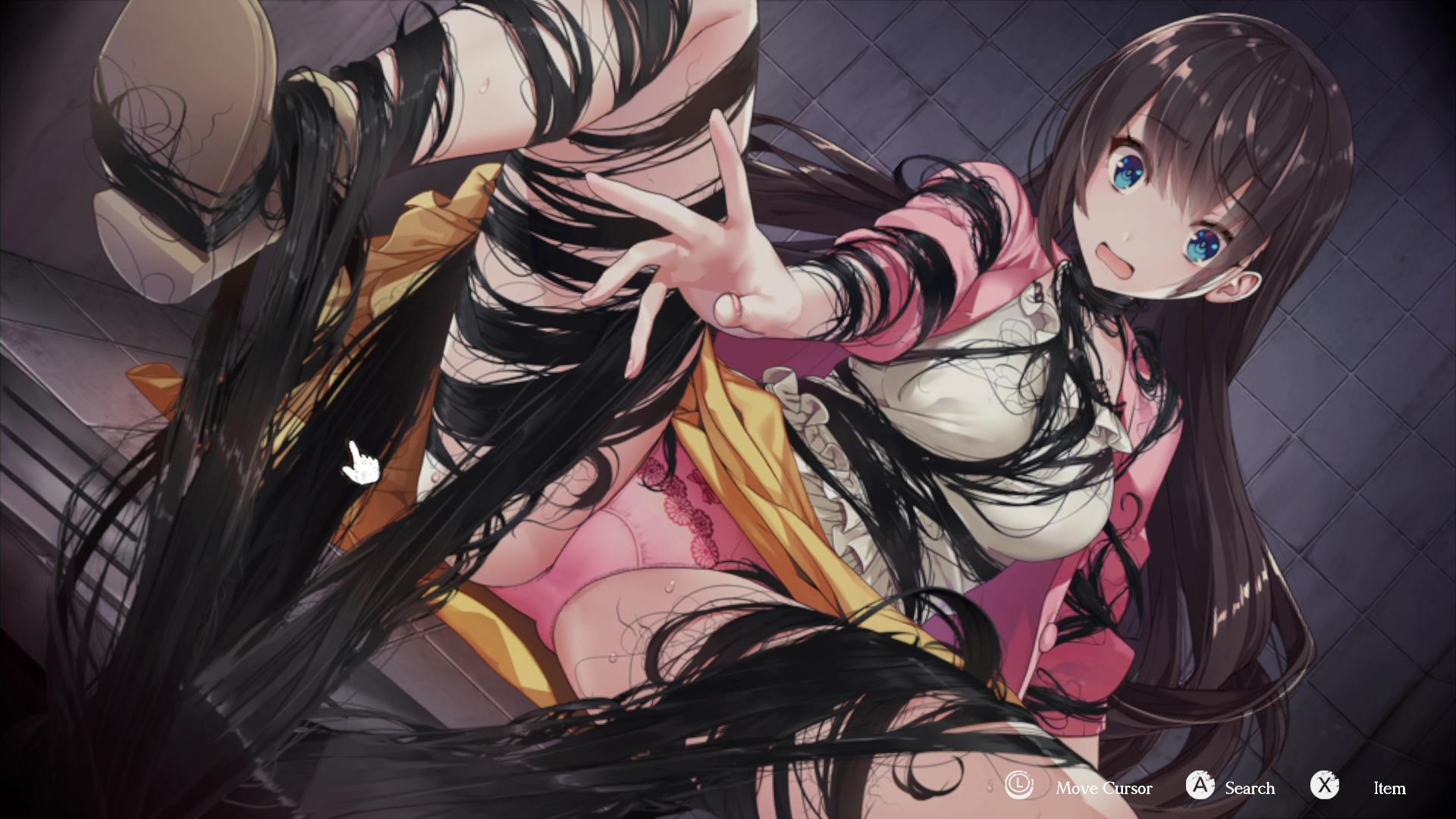 ▲Vast tendrils of human hair shoot out of the bathroom drain, ensnaring Mio's body! Use the items you've acquired to help free Mio! 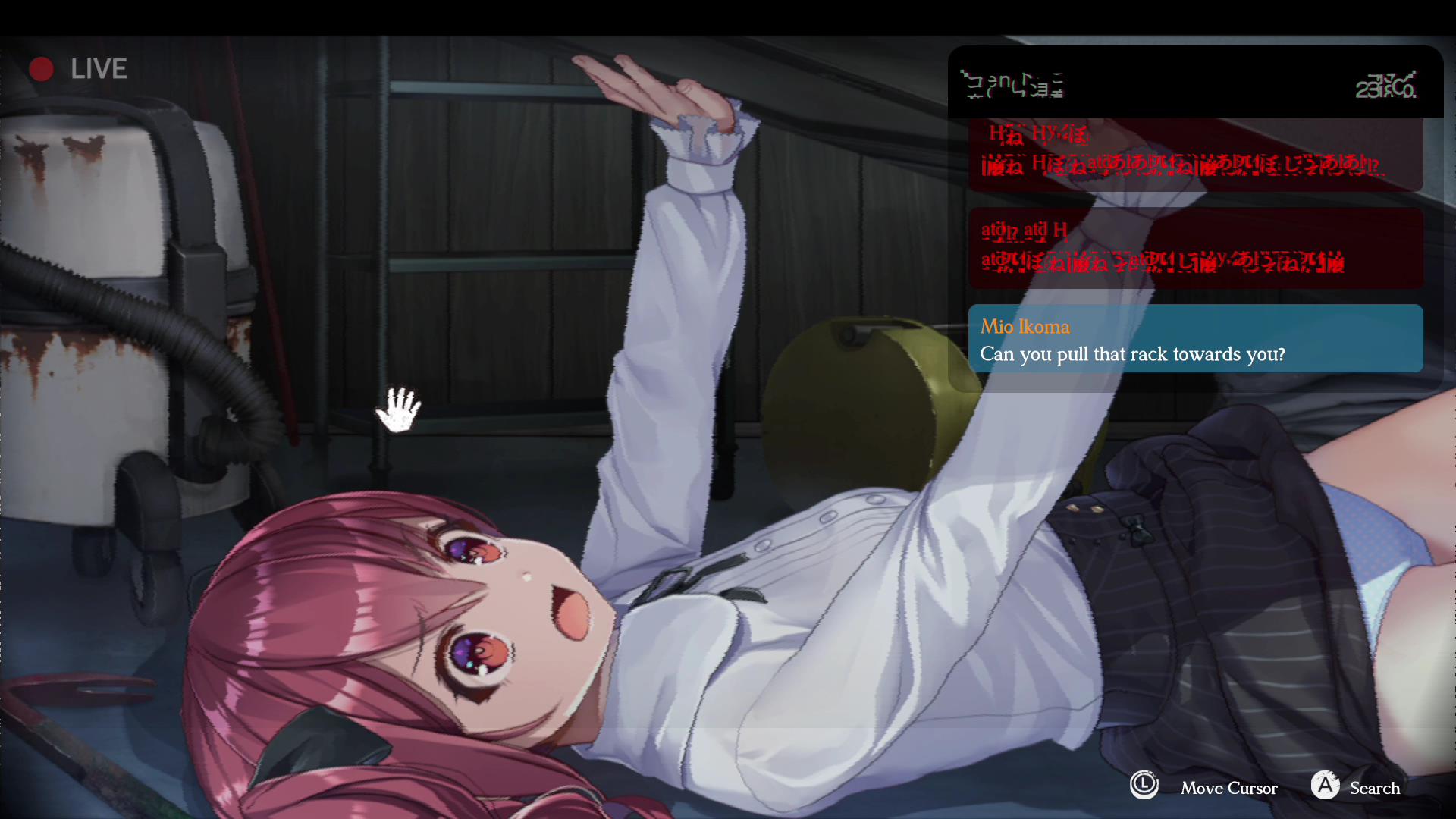 ▲Nana's desperate struggle to escape after she gets stuck under a giant fallen shelf is streamed live?! Tell Nana what to do in the video comments to help guide her to freedom!

You'll be met with various frights while exploring the hotel ruins. Investigate your surroundings to get hints and use items you find to help the girls escape from desperate situations.

You can even touch the girls, regardless of their plight... Is this also the work of the curse?!

Calmly assess the situation to escape from life-threatening horrors!

To promote Livestream: Escape from Hotel Izanami and grow its popularity (top games), use the embed code provided on your homepage, blog, forums and elsewhere you desire. Or try our widget.

Explore the infinite cosmic horror of The Backrooms! 3 SIMPLE RULES Venture as deep into The Backrooms as possible without going insane Check your watch...

A hiking trip turns into a night of terror as a group of teens take refuge inside of an abandoned mansion in the woods. Too bad it's home to a maniac...

If you like challenges, The Midnight Game will give you an experience that will definatelly creep you out.

Amityville '76 is a horror game set in 1976 in one of America's most notorious homes. Explore the home,discover the history and survive the night. Recreated...

“They Are Here” - is a first-person horror story about a journalist who witnessed an alien invasion at the Grayswood farm. Explore the area armed...

Five Nights at Freddy’s VR: Help Wanted is a virtual reality experience for the HTC Vive and Oculus Rift. FNaF VR: HW is a collection of classic and...