A technical demonstration of liquid simulations for the voxel genre, Liquid Cubed is a WIP project developed by a coder and his brother with the free time they have on the weekends. There aren't any particular objectives in the game, but you are able to build dams, pump water, drain lakes, and otherwise experiment with the liquid system within the building area.

The algorithm used for the liquid simulation was developed over two years in a modified version of Infiniminer. After Minecraft's wild success, we thought it was about time we built a standalone "proof-of-concept" in the hope that the algorithm could be integrated within Minecraft, but unfortunately more work will have to be done before this can become a reality.

We've e-mailed Markus "Notch" Persson (creator of Minecraft) on several occasions regarding integrating the algorithm into Minecraft, but for the moment it's not a feasible option. Aside from Minecraft's more pressing development issues, without our algorithm having A) proof of internet support, B) a stable framerate in an "infini-world", and C) proof of compatibility with MC's lighting, it doesn't make much sense to throw another wrench in the works, does it?

In the meantime we will work to improve the system so it can run harmoniously in a similar blockType environment! UPDATE: Please read the news below (3/23/11) for an important update on this.

While we're still finishing up our "Warcraft vs Starcraft" WC3 mod, progress on Liquid Cubed will be slow and steady with new public builds being made available about every week or so. Plenty is planned to reach the goal of the liquids being "super effective!", below is the current priority-feature list: UPDATE: Please read the news below (3/23/11) for an important update on this.

Liquid Cubed was built for rapid prototype development, and although we may switch to DirectX or OpenGl if/when the opportunity arrives, for now the game is built under XNA, requiring XNA 3.1, DotNET 3.5, DirectX 9.0c+, and a Shader 2.0 3.0 videocard. Legacy ATI video cards currently aren't supported, but with Zarat's help we're working on a solution.

Please report any bugs or suggestions on the forums here.

If you can't get the game to run, first check to make sure you meet the requirements, and then follow the instructions in this forum thread to confirm the necessary software has been installed. If it still fails to run, follow the thread's instructions to retrieve your computer's dxdiag.txt so we can attempt to decipher the problem.

We've shared in everyone's excitement for Liquid Cubed's prospects in Minecraft; however, the further we've developed progressive systems and parsers (with much still left to do), the more we've recognized that the modifications to Minecraft's rendering engine would be a very large operation.

In combination with Minecraft's advanced stage of development and Mojang's goals for the game's release, we've concluded integration in the end is unrealistic at the present time. We'd be willing to consult with Mojang regarding the liquids if they were interested, but up to this point they are not, and we have to move on.

We first fell in love with the freedom of voxels in Zach Barth's Infiniminer back in 2009. A whole slew of limitations forced upon games were suddenly broken with Infinimer's concept “everything matters”, and it was nothing short of brilliant. The real inspiration for us however, came from the game's infamous lava.

While expanding upon the concept of a more advanced liquid algorithm, we spent the next couple years modding Infiniminer off-and-on with many other little hair-brained ideas. Having contemplated adding “constructable flying blimps” in the Fall of 2009, we were led to an even crazier string of thoughts:

“What if you were mining an asteroid instead?”

“...What if you could walk around a starship you built from stem to stern, power conduit to warp engine, and every part of the ship actually matters?”

“...What if you could suck people out into space, blast apart a ship's power arteries, cut a ship in half, work together with your buddies to hold off a boarding party, raid derelict vessels for parts, and land on procedurally generated planets to force the locals into digging up gold for your intergalactic conquest!?”

At the time, the wishful ramblings of a 'pure voxel starship' game seemed ludicrous, and since 2009 we've added quite a bit to the wish-list for a “Starship: Infiniminer”. But after testing the necessary components in Liquid Cubed, gaining several years of experience within the voxel environment, and building a plan that will support the long-term development, we believe we're capable of pulling off this ambitious concept.

What will follow for the tentatively titled “Blockade Runner” should be familiar to those already experienced with agile indie projects: Rapid development builds, the indie-funding-formula “pay less now for alpha”, and a team forgoing the publisher's capital investment to ensure the bold vision is never lost to 'market appeal'.

Full-time work on Blockade Runner by Nathan has already begun, with an in-development version of the game being prepared for release on April 11th . The six month plan is to focus on multiplayer with build-able, crew-able, functioning, “living” starships using cellular automata. This will then lead to further development sprints reaching procedurally-generated stations, planets, and beyond.

More information on Blockade Runner will be available as the new ZanMgt website is unrolled during the next few weeks.

We'd like to thank everyone for their support for Liquid Cubed. Your help and suggestions have been an enormous blessing and are very much appreciated. Although we're disappointed in having to cut Liquid Cubed short of meeting our stated goals, we're very excited about the future and hope you'll join us in the development of Blockade Runner!

UNDO
Rejoice! When the line tool accidentally flies off you can now revert the mistake! Press CTRL+Z to undo the last tool events, press CTRL+Y to redo the tool events.

Note that water will not be affected by undo (although you can undo a water conversion).

You can alter the default number of undos inside the Settings.xml. Some of the tools can take up more RAM than others, so use discretion when altering the number of undos (100 should really be more than enough). 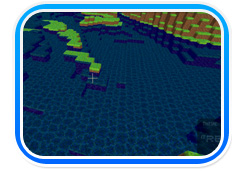 POLYGONS SEALED, AND RESEALED
A superior form of sealing the water polygons was constructed in the past two weeks. This was to resolve a coding issue as well as provide a solution for dynamic and smooth water, which will now be carried onto Blockade Runner. 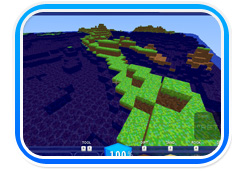 IMPROVED PERFORMANCE
A parsing mechanism that works in combination with the polygon sealing now helps to reduce the GPU load considerably. Liquids closer to the player will update their visual status faster than the liquids in the distance.

If you do something absurd (a floor of water across the sky), you might see some absurd results. In this case, water floating in the air for longer period of time, but this parser is meant more for slower machines. 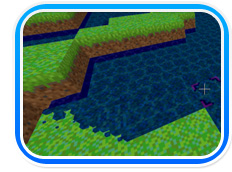 DISSOLVING WATER
The special effects for water dissolving in the 16x16x16 course is now available in the larger courses as well. You can press the “L” key to cycle through the different levels of the special effects. 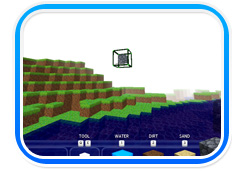 SUMMON BLOCKS IN THE AIR
Blocks can now be created in the air without having to build off of a block. With the Line tool, this allows you to fire a line from where you're standing to where you're looking.

PRIORITIZATION RESULTS
Undo functionality was a “fun feature” added in this version of Liquid Cubed. Even though all new development is focused on the new game, I still wanted to share the ranking results of everyone's combined prioritization lists for those who are interested:

Vertical pumps are the new toys, but under the hood work has been done to allow us to improve the range and performance of the liquid engine.

The Undo ability, a new parser to reduce the memory of water for slower computers, and active dissolves in larger courses make up the brunt of this update...

Improved performance, distance fogging, bug fixes, and more in this update! *** Please be sure to check the requirements / known issues below! ***

Vertical pumps are the new toys, but an under-the-hood upgrade will allow us to expand the system substantially in the future. *** Please be sure to check...

Custom themes by editing .PNGs, height maps are now editable, graphical fixes, reduced file size, and more in this update! Please be sure to check the...

Large scale courses, improved rendering system for greater performance, and many other new additions are included in version 1.0.3 of Liquid Cubed. Please...

why not make ur own voxil based game? you guys seem VERY skilled :D

Lol they have XD

Wow a hater came through and voted down all the comments.

He probably thinks this is a ripoff of minecraft... which it isn't.

Could this work with SwiftShader 3.0 demo Somehow?

I need to know because i have everything else, but i dont think i have pixel shader whatsoever.

It's possible that it might. You can use the wikipedia chart here En.wikipedia.org to see if your video card supports pixel shader 2.0/3.0

Otherwise you might need to borrow someone else's PC to give it try.

ok.. i got my brothers computer, but when i start it, it comes to a blue wavy screen, now what?

alright, i have a quick question, i am getting a new computer soon, so, this is the video card: ATI Radeon HD 5450 graphics with 1GB VRAM, so, will that one work?

That should do fine. The wavy lines are likely from the legacy ATI videocard.

Ohhh k thanks for the info, ill be playing soon :D

I just got my new comp set up, ill be playing in minutes :D