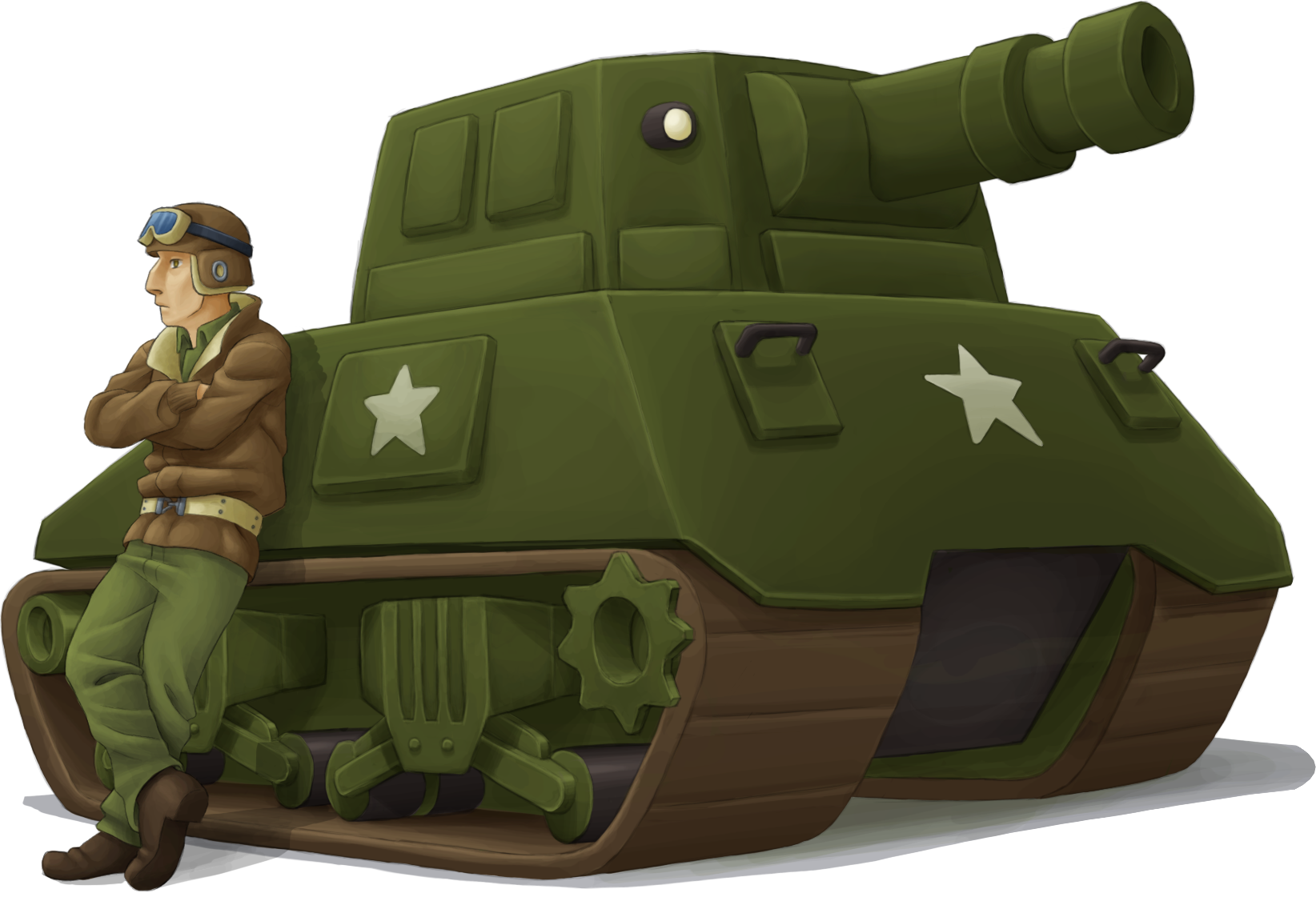 The year is 1945 and with the discovery of element 115 the evil Nazi Scourge has won the great war in Europe.

But with lil’ Sherman leading the fight, all hope is not lost. This elite U.S. Sherman tank, along with the support of the command center, will help take back Europe one country at a time.

* Battle through Europe defeating wave after wave of Nazi scum.

* Strategically place an arsenal of defensive weapons and deterrents to protect your command center.

* Gather loot and upgrade lil’ Sherman in the garage.

Join lil' Sherman's community on Discord to contribute to the game's development and interact with the team.

We want to thank UNOW3N for this amazing review of lil' Sherman.

You wanna know how much I like tanks? I played this arcade title knowing fully well its inaccuracies might tick me off, yet somehow I enjoyed it enough to warrant a review of my experience within it. Simulators are fine and dandy, yet sometimes you just want some raw action without requiring a field guide to play. You might just want to point and shoot, watching things go boom! Lil’ Sherman is good at that while also providing adequate eye candy in colors far livelier than the sad ol’ shades of brown and grey one might notice in nearly all WW2-themed projects. As the Steam debut for Dabster Entertainment, I’d say they hit the ground running while dabbing at the same time.

No history lesson here, just pure arcade fun since you’re being thrown into the thick of it. Quite the alternate history in fact, as apparently the Jerries (Wehrmacht, if you’re feeling fancy) have invaded Switzerland for some reason. Neutrality AND the only place in Europe during WW2 where everyone stored their “questionably acquired goods”, no longer seem to carry much weight apparently. Regardless of that, Uncle Sam saves the day once again. Or does he? That’s up to you, since you’re the one coordinating this absurdly difficult front. As if the Swiss landscape wasn’t already challenging, the local supply infrastructure would quickly become a logistical nightmare for any invading force, since even the bridges and tunnels are rigged to blow-up at the push of some buttons and levers. Yet somehow the enemy still managed to swarm in large numbers, to the point at which it becomes comedy material.

I fondly remember reading an old review for Blitzkrieg Anthology which describes the anachronistic late game phase for the Axis campaign with something around the line: “if Germany had so many heavy tanks operational in 1945, they would have won the war”. Yeah, they’ll throw nothing short of the (heavily armored) kitchen sink at you, while the last line of defense seems to be a glorified green fridge that’s cosplaying as a medium tank. The M4 Sherman may be the US Army’s most widely used tank (they built close to 50.000 of them, refrigerator factories worked around the clock) but it really didn’t hold a candle to a Panzer IV (nevermind Panthers or Tigers which used Shermans for “target practice”) or the constantly upgunned T-34. Fortunately for the M4, this is a fantasy setting. You’ll get plenty of upgrades which can be easily purchased in-game through natural progression.

Not the most eye-catching design, but it’s cheap and we can stack dozens of them on a single transport ship. I’m talking of the tank, not the game which is certainly better looking than many of its tower defense competitors on the Steam Store, by virtue of novelty at least. I get it, dev team went for the cartoon style and it suits both the subgenre and the somewhat lighthearted approach to a very bloody conflict. Of course it’s a Unity project, but you still won’t see me complaining. I never had performance or stability issues with this graphics engine in over four years since I’ve been testing it out in hundreds of indie games on Steam. Sure, those 4 maps are just reversed and rehashed off the same basic layout (no snow in sight, must have been a really hot Swiss summer), but at least the titular tank and its armored opponents are sufficiently diversified. I wish there was a way to disable the intrusive HUD, screenshots would look far better without all those stats and bars clogging the view.

Elevator music for a soundtrack or not, I was pleasantly surprised by the one-liners which act as voice acting in Lil’ Sherman. They’re actually shouted by your stereotypical drill sergeant, an element I found very welcoming. It certainly adds personality without torturing us with some terrible German accents (I’m looking at you, Man in the High Castle!) that would almost be considered war crimes in their own limited capacity. The opposing forces remain blissfully silent. Play some Rammstein in the background and you’re good to go.

If Lil’ Sherman would have aimed for a modicum of historical accuracy, those Panzer VI Tigers would have run out of fuel and ammo far sooner than getting knocked-out by a handful of Shermans shooting at the same time. Instead you’ll get to blow them to smithereens in a few shots with a single Sherman, but definitely not a conventional turret. You can quickly upgrade to far bigger guns (we’re talking mobile howitzers here) and even cutting-edge missile barrage platforms. Indeed, I was further flabbergasted to notice that the “evil greys” were sporting tank designs that resembled M48 Pattons and even T-72s. Oh, the things arcade titles resort to in order to freshen up a batch and call it diversity. I will however give credit where it’s due, it would have been dreary to blow up the 753rd slightly bigger or smaller clone of a single tank design by the time I was done with the fourth and final map of the game. Don’t mistake their scarcity for an easy fight. It’s far from that and I couldn’t ask for anything better in terms of a challenge.

But here’s an idea, why not use “tanks” from the other Axis powers? Surely some Japanese or Italian tankettes would be worthy opponents for an M4 Sherman. Hell, even a machinegun-strapped tractor with shoddy plate welding (New Zealand’s Bob Semple design) could take on a Type 94 or an L3/35! Use your imagination, there are so many form factors that never get enough attention even as the butt of a joke in MMO tank sims. In all seriousness though, there is plenty of upgrading here to warrant a sustained playthrough. And you’re far from defenseless here, Lil’ Sherman’s a self-respecting tower defense at its heart. In the short time span you’re not being Zerg-swarmed, you can lay all sorts of traps and auxiliary platforms shooting at your foes while also acting as a buffer which absorbs damage instead of your tank. Victory requires a careful mix between mobility and strategic placement of those friendly structures, but that’s standard procedure, right? You must defend your very fragile base, an aspect that can end the game prematurely if you’re too focused on the offensive.

A lil’ price for a fun game indeed. It was recently bundled, so quite a few players got to experience this amusing interpretation of a souped-up Sherman obliterating entire panzer divisions through sheer firepower and determination. Plenty more TD fans will join, I’m sure. You’ve got more reasons to enjoy it than not. Even crusty armchair generals such as myself need a well-deserved break from the hideous face of true warfare simulations. If you’re itching for an arcade tank experience minus tower defense elements, look no further than Panzer Elite. It’s on Steam and yes, there are green fridges in it as well!

Release on itch including soundtrack and sharing concept art.

Some amazing lil' Sherman concept art that needs to be shared and a great stream!

steam achievements, community streams and xbox controller in the works

Big dreams with a tiny tank, new battle video and live on Steam!

If you want to play our alpha join us on discord:
Discordapp.com

Nice work, the assets are great, did you make them all yourself?

Thanks, we have a small team.