Hello. I really enjoyed playing Legends of Pixelia v1.00 during the last weeks, but I noticed some things that still needed a change. As of today, version 1.01 is here to fix this! More epic items, more balance, more fun in Game+.

Hello. I really enjoyed playing Legends of Pixelia v1.00 during the last weeks, but I noticed some things that still needed a change. As of today, version 1.01 is here to fix this! More epic items, more balance, more fun in Game+. 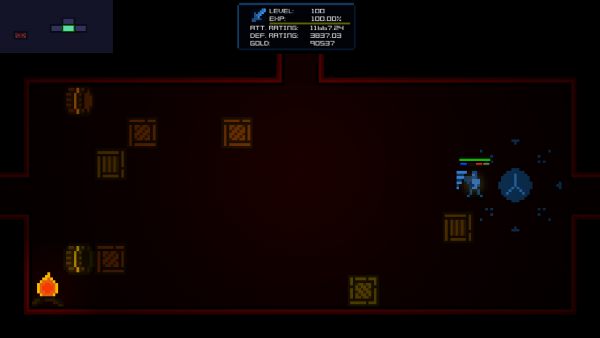 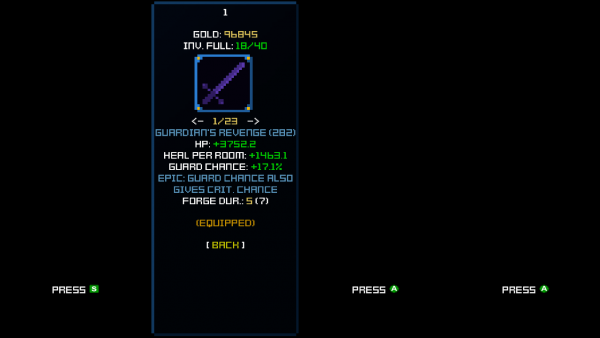 I really like finding epic items, but once you reach Game+ mode, you tend to find the same items. That's why I added 18 new epic items to the drop pool, increasing it to a total of 43 different epic items. There are some really cool epic effects like perma endurance (your skills can no longer be interrupted by enemies) or increasing your critical chance based on your guard chance. :-)

To be able to find these new epics, the scoundrel's dice now also increase the chance to find epic items. Hurray! 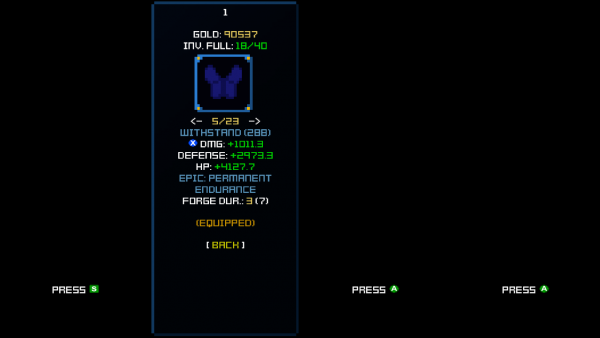 One of my favorite changes in the new version: Pressing and holding the attack button now chains the base combo. This change really helps when playing high attack speed builds. Also, sometimes it was hard to correctly time your block when trapped in a hostile Holy Cross spell. Pressing and holding the block button now blocks whenever possible. This might sound like a small change, but it really changed the way to play the game for me (in a positive way). 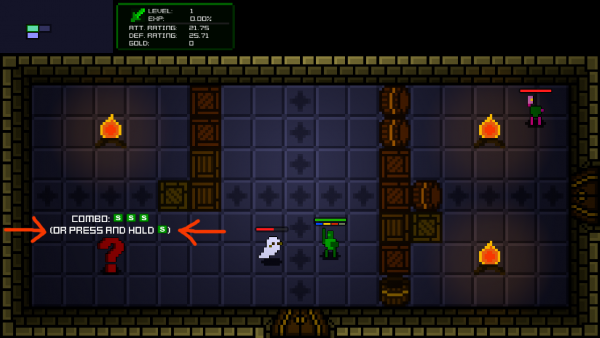 Whenever I started a new hero, I felt forced to put my stat points in either the melee, ranged or special tree due to the 40 point bonus being so super powerful (cooldown charge). That's why the 40 point bonuses of the defensive and the offensive skill trees got buffed.

Also, I talked with a friend about softcore and hardore heroes and he had the opinion, that hardcore is easier in the long run, because you only find demon blessings which offer way higher stat bonuses. After playing a hardcore Vamp Hunter to level 99, I totally got his point. That's why I increased the bonus for angel blessings by 50%. The demon blessing bonus used to be 5 times higher than angel bonuses, now they are about 3 times as high.

I miscalculated guard chance... in two ways. The displayed def rating used to overestimate guard chance where the actual values were way too low compared to critical chance. I fixed the def rating calculation and increased all guard chance values by 30% (this change is retroactive). 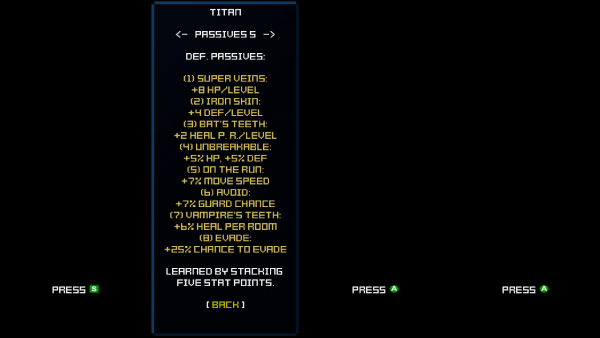 Starting at level 50, the EXP curve in version 1.00 was way too high. To fix this, I increased the experience gained in Game+ dungeons all over the place. You can (more or less) easily get your hero to level 95 in version 1.01. Also, the EXP cap sometimes felt a little too harsh. It is a lot softer now, allowing you to over-level if you want to. After some minor fixes to some bosses and enemies, Game+ is really well balanced now. I enjoyed my test runs with a softcore Paladin and a hardcore Vamp Hunter in version 1.01.

Still reading this? Go on and play the new version! ;-)
Oh, by the way: Happy Halloween.

Cool game with steady updates! Keep up the good job!