A fan of the old Avalon Hill/SPI WW2 strategy war games? Like to think about your next move rather than having quick reaction times? Battle Series Eastern Front - Kursk 1943 is the game for you.

Battle Series Eastern Front - Kursk 1943, covers the largest single tank battle in the history of warfare. Approximately 1400 tanks and assault guns met head to head near the town of Prochorovka, in a battle that became a desperate close range shoot-out which would decide the ultimate success or failure of Operation Zitadelle.

The 2nd SS Panzer Korps began it's attack on July 3rd, and spent the next 8 days breaking through the dense Russian defensive positions. During the late afternoon and evening of the 11th, they broke through and repulsed a counterattack by the Russian 31st Tank Corps. Reorganizing during the night, the panzers struck northward before dawn on the 12th. As dawn broke, the lead German elements ran head-on into the lead elements of the Soviet 5th Guards Tank Army and the battle was on. It was to last all day, in confused and savage fighting at close ranges.

This game recreates that day with the player being able to play both as the Russians and Germans or against the AI. Go to yobowargames.com for the latest updates as the game develops

Infantry Battalion with Attack of 2, Defense of 3 and Movement of 6

Artillery with at top Range Attack of 1, Range Defense of 2 and a Range of 18

Tank Battalion with Attack & Defense of 6 and Movement of 7

Thanks for voting and helping Kursk 1943 on it's quest to become the 2021 Indie of the Year. You are now in with a chance to score some free games. Help this game secure more votes by embedding the widget (or link) we have included below on your favorite sites.

How should an Indie game success be measured?

As I develop and prepare for my first commercial game (meaning I will charge for it) I have probably been doing what others do:

Underneath it all what I am stressing over is "Will my game be a success?". But what is success? Is it money, happy gamers, a job well done or something else. What were my expectations when I put my first game onto Google Play? In order of importance I believe they were:

So was my first game a success?

Write a game and publish it

How did I make this a success?

Since that first version I hired a graphics artist and for $75 got much improved graphics which I re-released mid December.

This one exceeded all my expectations. I would have been happy if I had one or two downloads. The game is free but I think it is in a niche area. 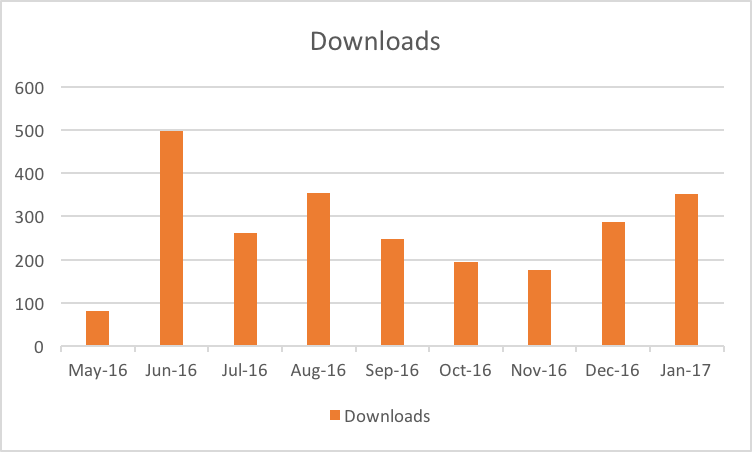 So to date I have had just under 2500 downloads from Google Play. In addition my game is available on many 'alternative' sites (Read - they stole my APK file) and I am guessing the downloads are around the same.

In addition I have had ~650 iOS downloads and 11 Windows downloads.

The upward trend on Google Play in December and January are I believe solely down to me adding links/blogs to various sites. Post marketing does work!

So this is an interesting area. I have not had one review for the iOS version. Nada. Nothing. Tumble weed rolls through the review section. I have read other blogs that say the same. Those iOS downloaders are a breed apart.

On Google Play I have 32 reviews and currently stand at 4 stars. So that to me is another success.

So was my first game a success?

What about my new game?

I need to stop stressing and go back to my simple ideals on the first game. So same as before but with one tiny amendment.

Anything else will be a bonus....