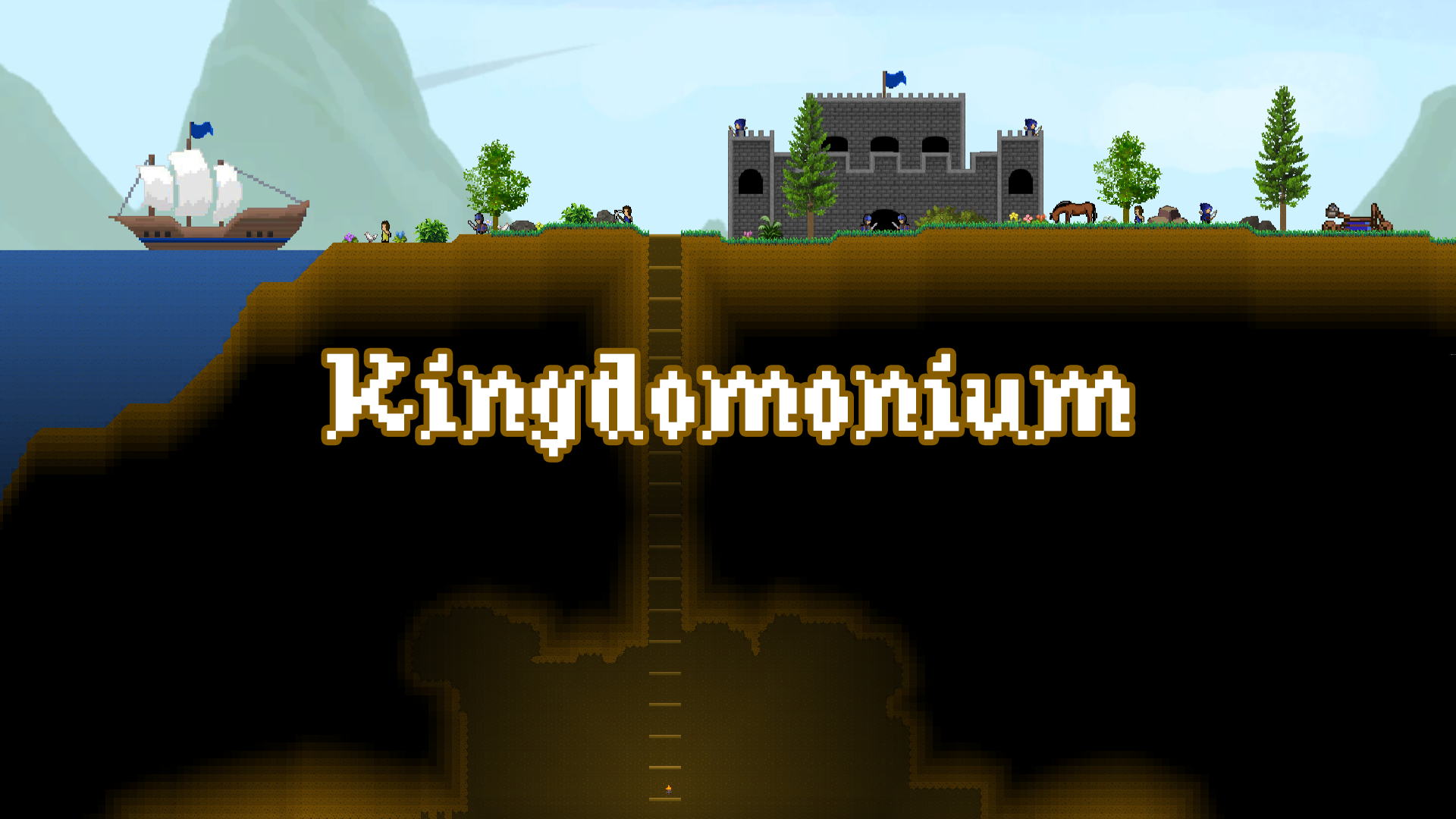 Kingdomonium is an indie medieval procedurally generated side-scrolling real time strategy game. Build up and command your medieval kingdom to explore and conquer the land. The game at its roots is a real time strategy game with the unique mechanic of playing as a side-scrolling 2D platformer. You play within a procedurally generated sandboxed open world environment which allows activities such as foraging, chopping, digging, mining, building, fishing, sailing, exploring, strategic combat and many more!

So what's so special about this game?

Most traditional real time strategy games play from a top-down perspective. Kingdomonium plays as a side-scrolling 2D platformer. This combined with the fact that the world you play in is procedurally generated with aspects of destructible terrain makes for some very intriguing and enjoyable gameplay!

What can I do in this game and what is the end goal?

The game allows you to take command of a medieval kingdom. You give orders to various constituent units (some of which are mentiond below) to perform tasks such as foraging, chopping, digging, mining, building, fishing, sailing, exploring and tactical combat. There are many goals in the game but the main overarching one is to expand your kingdom and take over as much land as possible. Other goals include exploration, finding rare items, overcoming various obstacles and enemies and many more.

What commandable characters or units are in the game?

Below are some of the basic units planned in the game. Of course this is only a small sample. There will be many others and advanced versions of these below in the final game!

Villagers are the heartbeat of the kingdom. They perform a multitude of tasks such as wood-cutting, mining, building and crafting. Without them the kingdom cannot function

The short swordsman is a staple infantry unit. Although basic they are a formidable force to be reckoned with when commanded in groups for close range melee battle

The archer is another staple infantry unit. They are very effective for planning strategic range attacks and defending the kingdom from higher vantage points and gaurd towers

The knight is a more capable, experienced and equipped infantry unit. They possess a great amount of armour and durability as well as quicker attack times and greater hit-point damage

The cavalry are highly durable and effecient combat units. They possess a great amount of stamina and hit-point damage against any opposition as well as having the ability to traverse vast distances quickly

Priests can heal wounded units as well as cast spells against the enemy during battle. In addition to these they also possess further mystical powers yet to be revealed

The catapult is a basic artillery combat unit. Highly advantageous for launching ranged attacks with large splash damage. Especially useful for destroying buildings and other structures

The transport ship is essential for moving troops, equipment and supplies across sea to neighboring lands

To promote Kingdomonium and grow its popularity (top games), use the embed code provided on your homepage, blog, forums and elsewhere you desire. Or try our widget.

Heresy is an Real Time Strategy / Role Playing Game. You take the role of a God influencing the lives of your followers in a medieval setting. Build villages...

Serfs Galore is an action RTS in which the main player will spend coins to recruit soldiers and command them to beat enemies and grab keys to open doors.

Archamon is a realtime creative/building/survival strategy game from medieval times. You are elected as a leader by your people and your mission is to...

Drohtin - Tales of an old Kingdom

Drohtin – Tales of an old Kingdom is a medieval real time strategy game. Building up a successful economy is the foundation of a thriving culture, advanced...

In Guild Commander you manage your guild to victory! Deploy your guild members and save your world from the Necro Lord!

Viking Raid a game where you play as a group of Vikings that raids Saxon Villages. Right now, we're going to be focusing on gameplay, so the actual strategy...