Kernel Space is a turn-based strategy game where your only goal is to protect a PC from destruction by viruses through five different levels.

What is Kernel Space?
Kernel Space is a turn-based tactics game, where the player plays as an antivirus and his/her goal is to protect the PC from destruction, while fighting countless waves of PC viruses over different maps.

This sound boring. Is that it?
No. Of course not. In Kernel Space you'll be able to level up, and while leveling up unlock skills and upgrade existing ones. If that's not enough at the end of each level, you're able to pick up one augment, to make your antivirus build more fine-tuned to your liking.

So it has some RPG elements. How long will be the game?
Our game can be completed in around two hours, but we'll have a daily challenge mode, where every day you'll face off different sets of enemies, so you can come back every day, for a quick run. The level up system also can help you find your own play style.

How many skills are at my disposal?
You have four basic skills, a ranged attack, a dash, an ability to place down a trap, and a strong debuff attack that will reduce the enemies HP, but that's not all. You're able to choose four augments from our augments pool. This pool has 8 active and 8 passive ability.

Why am I limited to use only four augments?
Augments are granted once a level has been completed and they are chose randomly. We want to bring the element of randomness in the game, because small games like this can benefit from it greatly. After you sink a few hours in the game, and start to have favorite builds, you can come up with ideas about what should your augments be, but even then, the randomness can create a truly unique experience each time you play.

Sounds good, when will be the game released?
We are planning to release the game on Q1, 2015 on many different indie game sites.

If you want to sign up, just send us an email to foxssake@gmail.com with the subject "Alpha Sign-Up"
Currently we're only building Kernel Space to Windows platform, so please attach your DxDiag file in you email. With this we can know what kind of system you're running Kernel Space on and it can help us bugfix the game. Your name will be listed on the credits as an alpha tester. 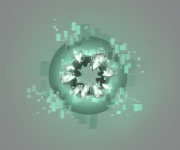