The game tells of a creature named Pip, who has an incarnation in a surreal world as a funny but brutal worm. Pip is naive and doesn’t know anything at all about this reality. Talking with a flower or a stone for him as natural as tasting another representative of local fauna. He examines this new world overcoming obstacles to a new rebirth and trying to figure out who he really is. At the same time he is learning the laws of karma and the relativity of good and evil.

• No text dialogue in the game. No text at all! All communication is via visual cues and images, in the form ofclouds over the heads of the characters with cartoon icons only. Doesn’t require the cost of localization.

• Crazy bizarre world surrounds the character throughout the game. About 8 unique locations, lots of mini-
games and original, surreal and mind-bending puzzles.

• Astral sight gives an opportunity to look into the world of spirits at any point in the game. It also allows you to see through different sets of eyes at the surrounding scenery. In the astral world you could find the hints for quests and many other exciting and amazing things. The most common object could look quite different in the astral world.

• Variability of completing quests gives different ways to play through the game again and again. You have achoice whether you’d like to do good or evil things to complete quests.

• A lot of funny animations of the varied interactions of Pip. The environment and other characters of the quests are drawn individually for each situation.

How the consept of Karma changed over time.

I wanted to create a game where choice matters, where it defines future options.
This is what I came with initially (old concept): 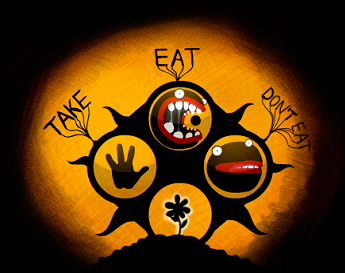 We planned to make unique menu for every active object in game.

The number near “growl” action shows the number of times Pip should growl before he could finally eat the object/character in question. 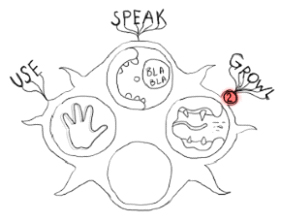 Here are some icon sketches:

Experience bar and fatness bar (which shows how many characters Pip had eaten so far)Once either bar hits 100%, the game was supposed to end.
Movement cursor concept:

This is how the marker for changing locations looked like: 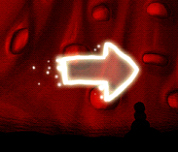 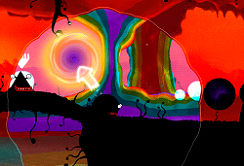 Then we decided to make astral vision upgradable, and created these little vortexes, which would expand astral vision once collected.

We also were considering aging in game:

But eventually we came up with our current concept for the game, and produced gameplay video.

Andrey Sharapov (CEO & Producer at AuraLab):When I saw that video, I immediately fell in love with the game. I was charmed by the concept, and I decided to use my experience to help the project. I contacted Alexander and offered help.We talked for a while and it quickly became apparent that we a like-minded, so we decided to work together. Soon, we started to rework the game.We changed interface somewhat – hid the karma-meter, changed interaction menu, making it lighter so it wouldn’t obscure the object itself. We also re-worked inventory and interactions part, and figured we don’t need some previously planned features in this release, like that aging mechanics and some levels where Pip could temporary grow legs and walk on walls.

The result was a game design that was possible to implement in reasonable time without losing any crucial parts of the gameplay. That is when we created AuraLab and began working on playable demo with our new team.

New sketches from he game!

Karma. Incarnation 1. We need your help!

How Karma became a game

By the end of the year 2013 our agency decided to surprise us - most employees were given a sack. As we had our farewell party, our programmer approached...

What a goofy, yet adorable game. I like your style. Best luck on indiegogo,;D

Hi there! If you have any questions about the game – please, ask public question. It will be pleasure for us to tell you more about Karma.