Isomer is an isometric realtime strategy game inspired by classic XCOM and other more recent sandbox style games. It's open ended, designed to be played in a variety of ways with world exploration, survival, crafting and strategy all blended together. Build up your forces by trading resources for reinforcements with passing resupply ships and mutate your troops into specialist units from scouts to warriors. Enemy forces attack periodically in an attempt to destroy your bases and facilities. How long can you survive? The worlds are procedurally generated, large and teeming with hostile forces, enemy bases, deep catacombs and life. On some worlds, extensive enemy facilities have sprung up and the inhabitants don't take too kindly to new arrivals attempting to poach resources from their backyard. Mined resources can be used to build structures, traps or fortifications as well as traded periodically.

Update 17 has a large number of bugfixes and tweaks, but the primary focus has been on polish and snazz. What do I mean by snazz? Well, see for yourself:

I just realised that this new build (0.8.6.1) is the 17th update since I opened up Isomer to alphafunding last year! That's a pretty impressive number and Isomer has certainly come a long way with many new things being added along the way. At some point I might do a retrospective showing the main changes, but I'll leave that for the 1 year mark.

Update 17 has a large number of bugfixes and tweaks, but the primary focus has been on polish and snazz. What do I mean by snazz? Well, see for yourself:

There have been lots of effects added - looting of resources from objects in the world / fallen units and mining is now more 'visual' with both the type and approximate amount of the looted resources shown. In addition to this, explosions are now more 'meaty' with particle effects and screenshake.

New blocks have been added to Isomer also! Both humans and aliens have a new alternative construction block as well as two new solid minerals blocks. Both minerals and rare minerals can be crafted into a solid (albeit expensive) block for when you positively have to show off your plunder to the inhabitants of the world you are subjugating. 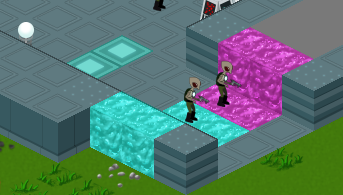 Building on the unit under fire notifications added in the previous build, now when either mini powercores or the primary core come under attack alerts will be shown on the HUD. This makes it far easier to track down and deal with human attacks.

Force fire mode (a feature requested on the forum) has been added. Holding the Ctrl button and left clicking when units are selected will cause them to fire in the direction indicated. Use this to cut down dense vegetation, ignite explosive barrels or smash through walls in enemy bases. 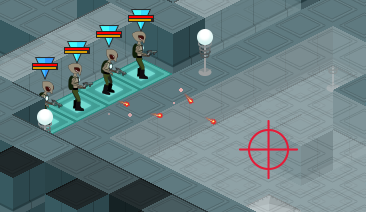 Lastly I want to talk about Greenlight! After 34ish days on Greenlight Isomer is 92% of the way to the top 100.. please keep voting for us and telling your friends, these next few weeks will be the most important!!

As with before, the new build can be updated from inside the Isomer launcher supplied with the Isomer Alpha.