Vertical shoot'em up inspired in old school classics, with a unique fresh approach to color polarity mechanic and a twist to puzzles and taking clever decissions. No bullet hell.

Year 2306. A century after the Nyagu taught mankind how to obtain electricity from their inner energy, enterprises started to exploit humans in farms to produce energy. What had formerly been a gift became a curse, reducing people to the condition of power supplies. Only when his mother dies in one of these farms Iro realizes he has got the power to change the order of things.

Thanks for voting and helping Iro Hero on it's quest to become the 2021 Indie of the Year. You are now in with a chance to score some free games. Help this game secure more votes by embedding the widget (or link) we have included below on your favorite sites.

What is IRO HERO about?

Hi everyone!
A year and a half ago I founded my own studio with a good friend of mine, an since then we started the adventure of developing this game. Now we feel like it is the right time to share with the indie community what we are doing, and let you know what our game is about. 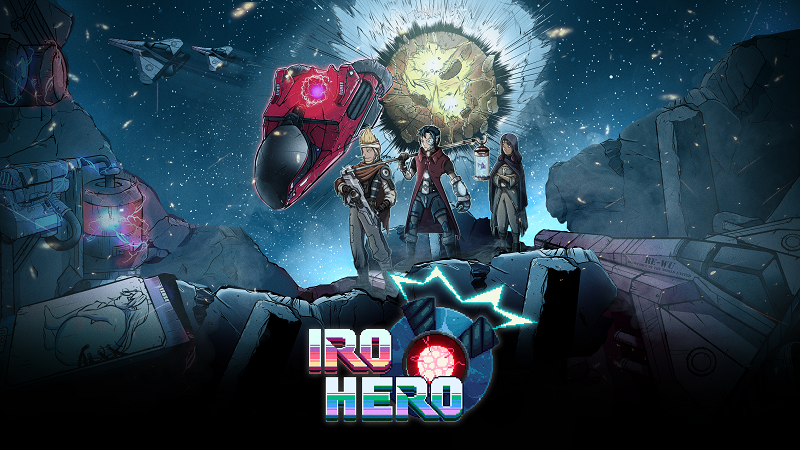 Speaking straight clear, IRO means color in japanese.
That's the name of our main character, and we inspired in Ikaruga's color change mechanic. (I'm a big fan of Ikaruga myself).
This said, end of the similarities.
It's very hard for us to explain that the gameplay is nothing like Ikaruga, and that the rythm of our game takes elements from platforms and puzzles.
Yes, there are a lot of bullets, but we have tried to not become another bullet hell, requiring from the player something else than dodging and shooting. 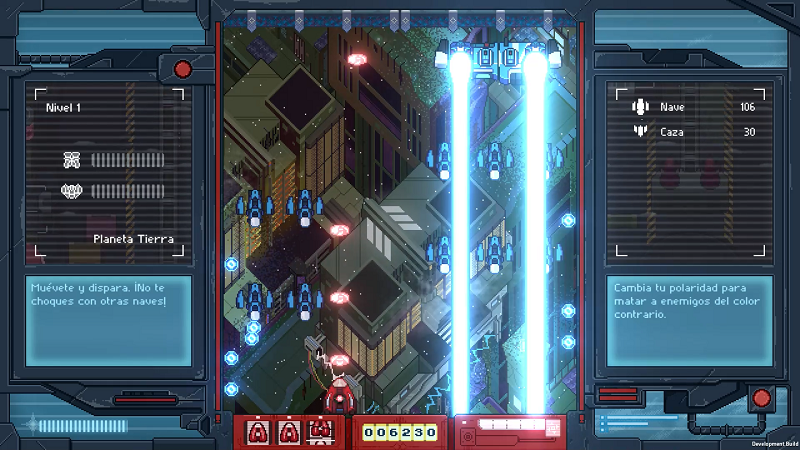 The story has an anime spirit. Iro hast the unique ability to switch his inner energy polarity between red and blued.
Up to here it is what you could expect more or less: The opposite color kills you, the same color doesn't,
and it's the same in order to kill your enemies, you have to shoot them with the opposite color.
Besides, Iro has two special attacks that need to be charged by absorbing shots of the right color.
Sometimes it might even be a good choice to absorb shots instead of killing enemies.
There are also destroayable elements along the levels and items that provide add-ons for the spaceship. 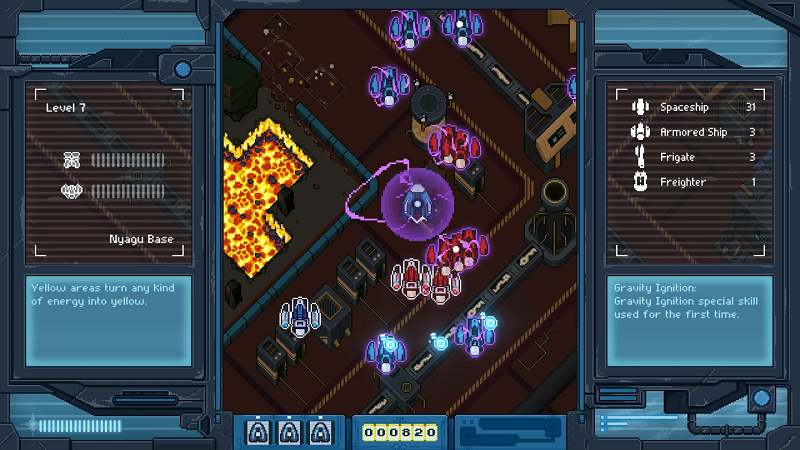 From this point things get a little bit more complicated. We introduce mirrors and color areas of different color: Blue, red, purple and yellow.
Each of these colors affect to our shots, and also to enemy shots, in a different way.
Sometimes these areas and mirrors will be useful for us as cover, and other times they will become a problem, as entering a color area with the wrong color implies a secure death. 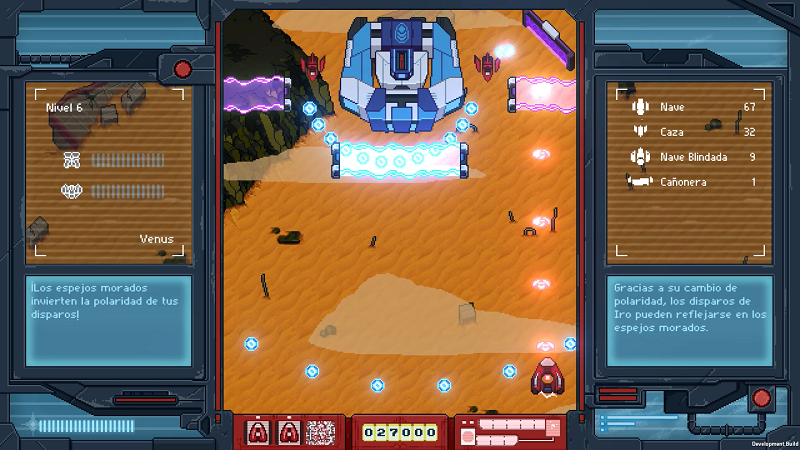 We have put a lot of effort in creating interesting levels, proposing fast resolution puzzles that won't spoil the game rythm.
The concept is totally arcade. Each time you die, you learn something useful in order to reach to a farther point next time.
You start with three ships, and at the end of each level you can recover them paying for them with some of your score points. But beware, losing your three lives within a level means death, the same way as though you were playing in an arcade maching with a coin.
This said, there is also a practice mode in order to improve your skills in those levels you have already reached. Some achievements can be also unlocked this way. 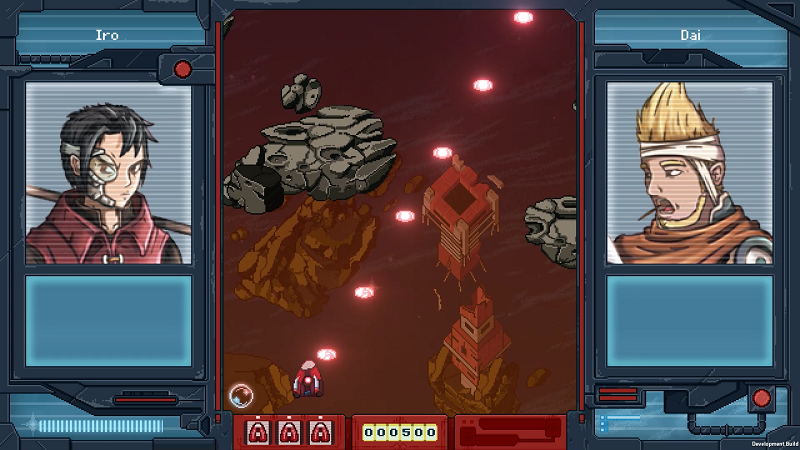 And last, but not least, we have included online leaderboards integrated with Steam and Switch,
in order to be able to compare your best score with the rest of the world or your friends. 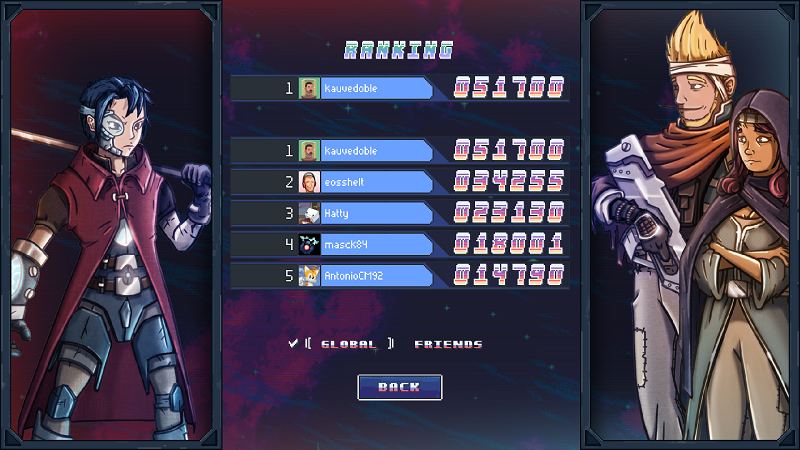 And no much left to say!

If you want to share your opinions, ideas, impressions, feedback... you are more than welcome.
Until now we have only showed it in a couple of conventions, and we have always improved the game after listening to the players' feedback.
So any help or idea will be much appreciated

And sure, I hope you will like it, and if you have any questions I'll be glad to start knowing you and answering them here.

Monsters vs Robots : The Battle for Monsteca Arcade