Firefight
Three territorial objectives, one for each team, plus one neutral. Each team only respawns when they secure an objective. Secure all objectives or eliminate all enemy to win. Every life counts, making this a very suspenseful experience dependent upon teamwork.

Ambush
One team must escort their VIP player to the extraction point. Both teams only have one life per round, so coordination is paramount. The VIP is only armed with a silenced pistol, but can pick up a weapon from a fallen enemy or teammate.

Strike
This attack and defend mode has three weapons caches that must be discovered and destroyed. Blowing up a cache brings additional reinforcement and time for the attackers, while the defenders lose a reinforcement wave.

Push
Three objectives must be captured by the attacking team in sequential order. For each objective captured, they gain more reinforcement and time to attack the next. Defenders have a finite amount of reinforcements and must use each wisely.

Infiltrate
Capture the flag style game mode where you must seize the enemy's intel while protecting your own base from enemy infiltration. Multiple players on your team can collect enemy intel. Teams spawn by reinforcement waves, when a friendly player seizes the intel, and when an enemy carrier is killed.

Checkpoint
Complete mission-based objectives such as capturing and defending key territory or destroying a supply cache against challenging AI enemy. Each successful objective will reinforce your teammates who were eliminated along the way.

Hunt
Eliminate all enemy AI on a night themed map and find and destroy their weapon cache. The weapon cache spawns randomly in one of three potential locations. Players only have one life per round, so stealth and communication are advised.

Survival
Play as Insurgents and fight against endless waves of progressively difficult Security enemies on night themed maps. Reaching safehouse objectives with your team earns you supply to purchase better weapons and spawns any dead teammates.

"Like Counter Strike and Red Orchestra had a baby."
Indie of the Year 2014 I Player's Choice
Post article RSS Articles 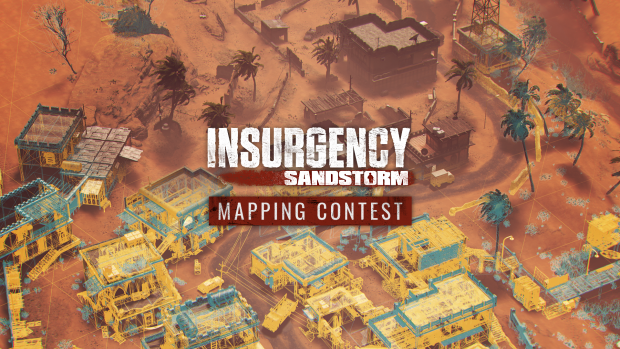 Developers New World Interactive have announced a mapping contest for their team based tactical FPS Insurgency: Sandstorm, which is now live!

Organised in collaboration with Nvidia, Intel, Epic Games, Focus Home Interactive, Saber Interactive, and mod.io, you have 20 weeks to put together your own map and go in the running for several prizes. You can work solely or in a team on your map and submissions will be uploaded and judged using the mod.io platform. 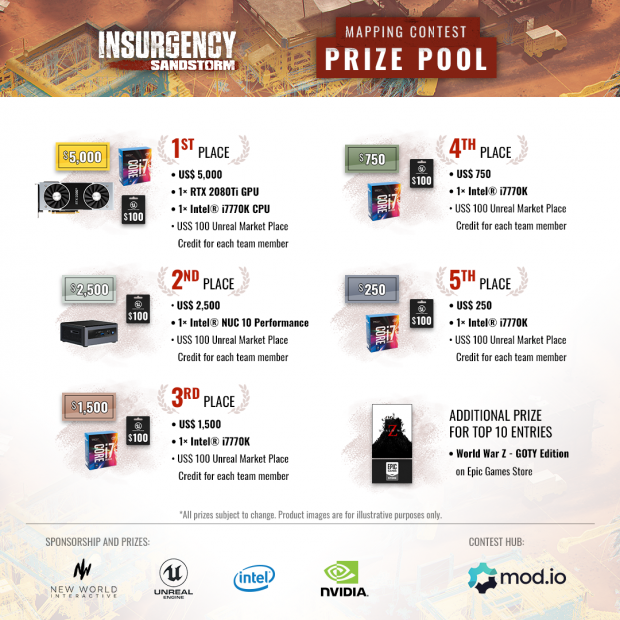 New World Interactive have a long history with not only running mod contests for their previous games (including Insurgency and Day of Infamy), but supporting modders and promoting their work too.

As a studio with deep roots in the modding scene, we are proud to be launching our first mapping contest for Insurgency: Sandstorm, and New World Interactive’s largest modding contest to date!

Whether you are an experienced level designer or a complete beginner, this contest is open to all ability levels and is the perfect opportunity to download our Mod Editor, learn Unreal Engine and familiarize yourself with level design principles.

Previous modding contests for Insurgency and Day of Infamy, have led to numerous incredible community maps, many of which have gone on to become official in-game content at a later date. With a 20 week contest and our largest ever prize pool, we can’t wait to see what fantastic creations level designers come up with, and wish all entrants the best of luck!

Learn more about the rules for the contest below, on the New World Interactive website and on mod.io. The event was kicked off with a live Stream on Twitch with Epic, which you can check out here. 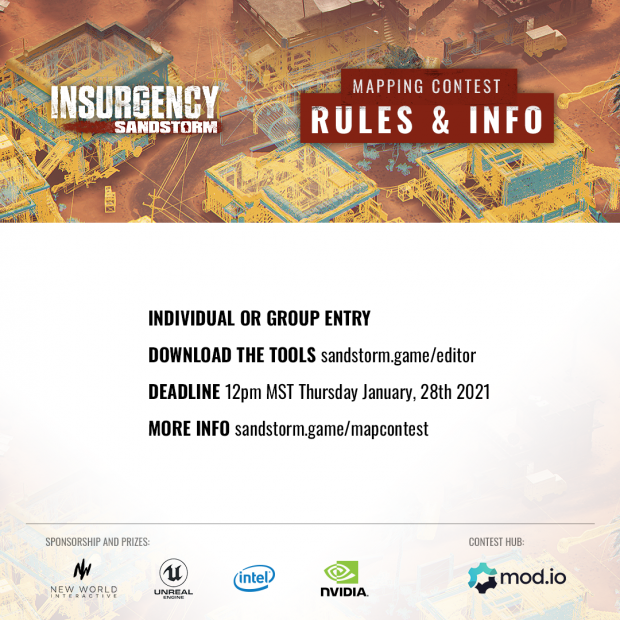 We're excited to announce that Insurgency: Sandstorm's is out now!

Final Update from the Frontlines

Insurgency and Day of Infamy Updated

The first map featured in Swords vs. Spies, this map is focused on close quarters environments. The map features many custom systems, such as tripwires...

Finalists for the Razer and Game Banana Insurgency map contest.

Insurgency has sold it's soul to NUKETOWN...LOL!

So.. I dont full understand, I can play Insurgency at linux?
Just in Steam no linux platforms.

Some more official maps for this game!
Would be also great to see a PKM machine gun.