Why Releasing a game once all the levels are "done" takes so long.

Well, as you've probably noticed, we’re horrifically behind schedule, and the estimates that I originally laid out for "finishing time" look like a joke now. When I was originally drawing up time plans for this, I assumed that once all the levels were done, we'd get stuck right into RC testing, and there we have it. Man. No WAY.

One of the most remarkable things about my time developing in IWBTFG is how much I've improved as a designer over the course of the project. In the beginning we were content making somewhat original but not so creative traps and puzzles that would either let the player pass, or kill them in the result of any mistake. 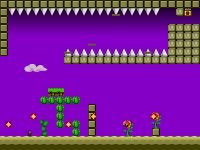 The above level is a reasonable example of this. It's not a bad level, really, and it combines a few of the elements players are familiar with into one larger, more difficult puzzle, but it doesn’t really bring anything new to the table. It's fun, but there are only so many of these levels that you can play. As we've moved on, we've realized this, and it's forced us to come up with lots more creative and interesting ways to challenge the player. For Example: Bats! 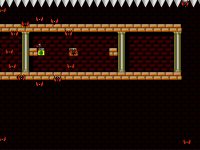 We really wanted to keep the feeling of unfairness and brutality that's been going throughout the game, but we have been forced to do it in new and interesting ways. 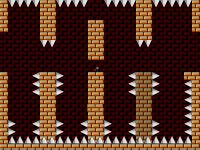 People still don’t seem to see "Things Falling from the Ceiling" coming, and it never stops being funny! 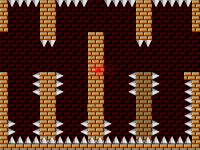 For some reason, that's one of my favourite deaths in the game.

Anyway, Once we "finished" the levels, we went back and started playtesting the game quite vigorously just ourselves, and every time we would, we'd come up with huge numbers of things we wanted to change. As such, we'd keep going back and changing older levels to update to our new standards of game design, and it's taken forever. It takes a long time for you to really get into the feel of how you want a game to turn out when it's finished, and so once you're really comfortable with what you're making, you need to go back to things you've already done and update them so it all seems smooth.

I'm actually a little sad when doing this though, because as we made the game in mostly difficulty-progression order, there was a state where the full game presented this amazing slideshow of how far we've gone in terms of game making skill. It'd be nice to someday dig that up and release it for the world to see. Not only all that, but things like Menu screens, save file encryption and options take much longer than you'd think to implement nicely. A good menu screen can take forever to do, apparently.

We really appreciate you guys sticking with us through all these delays. As promised, I'm definitely going to start updating more.

Aww. Well it's good to know that everything is bieng revamped.

I know the feeling. Work on something for a long time, and you'll look at the starting point thinking 'what the frak was I trying to do here?'. Still though; at least it shows how much you've learnt! Something to be proud of!

Take as long as you like. No-one can blame you for wanting to put out the best you can.