Set in the distant future where planets are harvested for their resources, join the H.E.M.F., an elite group of defense forces attempting to slow the endless waves of alien hostiles which recently emerged from the planet's crust. Join a game with up to 8 players and hold out as long as possible, choosing load outs, building defenses, and coordinating team efforts to hold the line. The game works natively on browsers, so no downloads, no installs, just play at our homepage. Servers currently located in us-east, us-west, and eu-west

Content doesn't really do much for a game if it's designed poorly... a lesson learned quickly after 'alpha' launch in October. Since then, the game has been restructured to hopefully provide a more consistent experience, regardless of familiarity.

Posted by digitalFairground on Nov 15th, 2021

A horde/wave style game needs to walk a narrow line of engaging and too overwhelming, and it's taken a while to get it somewhere that has a crescendo of action that doesn't result in being immediately crushed. 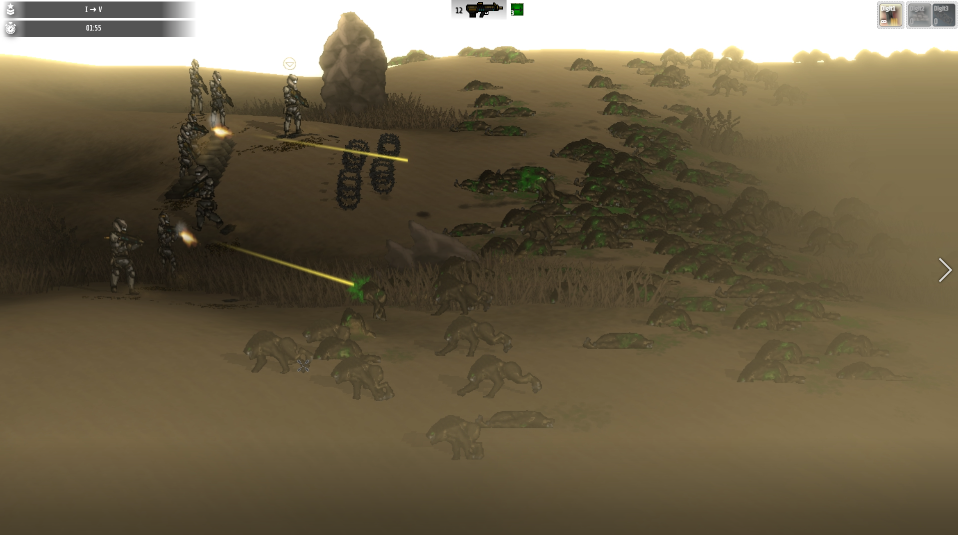 Previously, HEMF would have two general 'tracks' of difficulty progression throughout a game. General increase in the number of enemies over time, as well as more frequent spawning. The latter would adjust depending on how well you were doing, to continuously apply pressure the better you did. Since the game is a best score == longest time held, these mechanics kept it easier for newer players, but could ramp up indefinitely for skilled players. There were two major issues with the way this was done however:

What was done to solve this, was to implement a few things:

push back eventually triggers downtime to re-arm and re-build

All of this together makes sessions more consistent, and (hopefully) less punishing for new players, who can now build defenses without the worry of getting merc'd by enemies, re-arm and upgrade items at designated intervals, and intuitively track the team front-line getting moved backwards.

The game can be played in-browser at Hemf.io for free (no signup required), now in the EU :D The game is definitely full of blemishes, but feedback is always appreciated as the game continues development!