Hearts of Iron III lets you play the most engaging conflict in world history, World War 2, on all fronts as any country and through multiple different scenarios. Guide your nation to glory between 1936 and 1948 and wage war, conduct diplomacy and build your industry in the most detailed World War 2 game ever made.

Hi everyone. As the development of the next update for Modern Warfare comes along better then I expected I think it is the time to set a date for its release.

This update, which is no doubt the biggest one this mod has seen since its creation will add a lot of content and detail to the world. I would prefer to leave most of the stuff for players to find out but extensive effort has been put into making sure major and potential major nations behave according to their historical sense. While you will not see in this update any wars yet be sure to groom your relations with nations who have the resources that you need.

Europe for example will now heavily depend on Russian natural gas and an embargo from Russia is a devastating blow to all European nations, it may even be a good enough reason to go to war. Oil will also be a major issue as the lack of oil in Europe will be bringing all that European wealth into North America and the Persian gulf countries. Many events have been added that affect major European nations and the great powers (USA, China, Russia). In most cases you will have a choice on deciding whether you want to flex your muscle with these nations or keep things calm.

Smaller nations like Taiwan are covered as long as the American guarantee is in place but what happens if the US decided it has more important business elsewhere? Will Taiwan really be able to hold off the Chinese dragon?

And of course the tech tree, the very essence of this update will be something for your to explore. While you will not have access yet to all the techs you will be able to finally wield modern tech on the battlefield instead of the old WW2 buckets of bolts. Be ready for unmanned aircraft, flame tanks, nuclear carriers and much more...

Note three things about the tech tree: There won't be any images of the new techs and units with this update but this will of course be added later on in a future update. Also, you will not have access to missiles and artillery with this update, both of these require some intense integration and should be added in the future.

I hope everyone who has tried the mod will rediscover it again and those who haven't tried it yet will give it a shot with the new techs, there is still plenty of work to do but this is a major leap forward.

(Figures on screenshot are random and are not final) 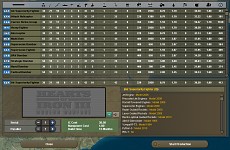 Will look even better with correct figures :)

hey playerHOI are you planning on uploading this to desura so we can download it off of desura instead of moddb???