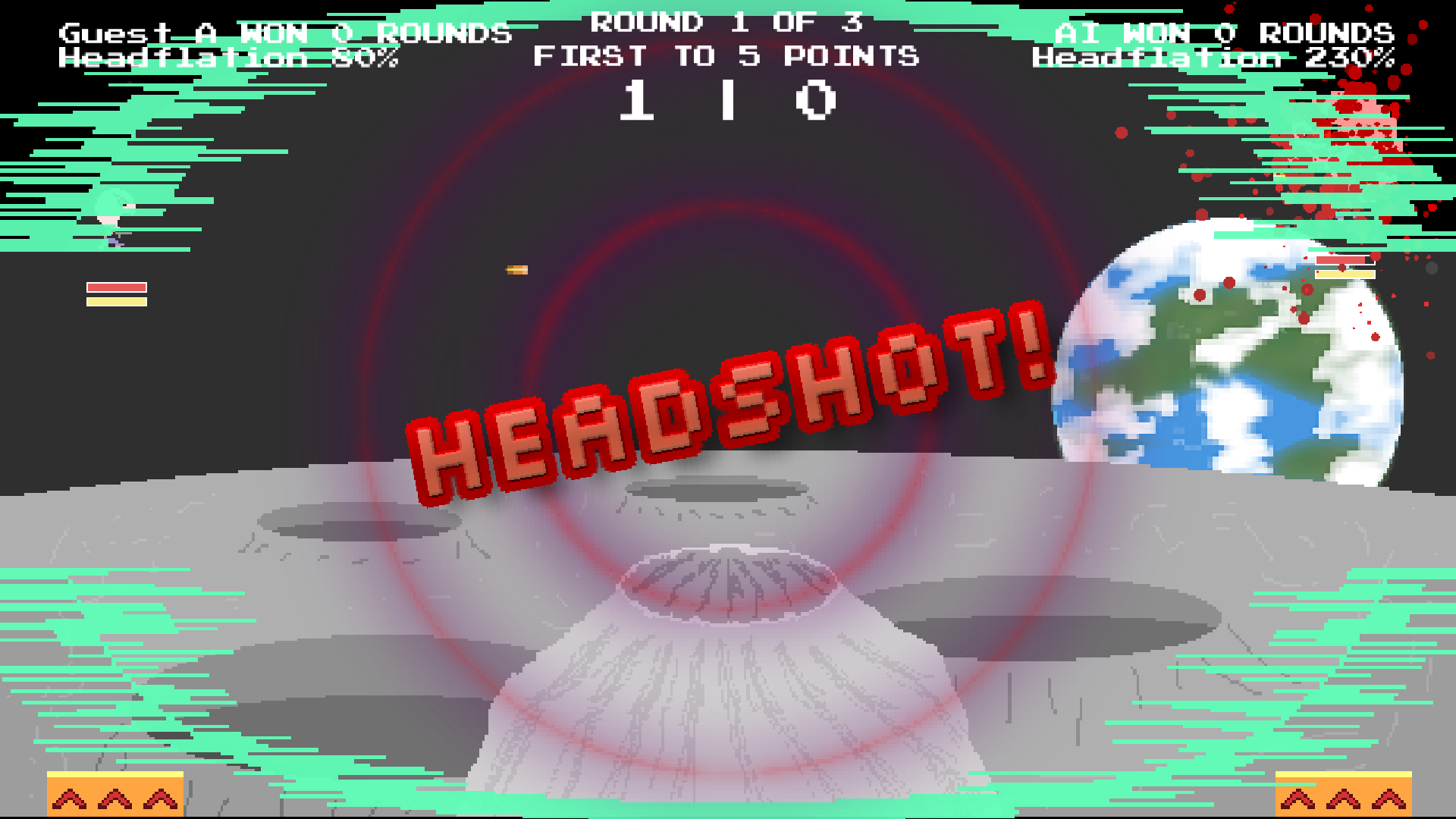 The Beginning
I had been working on another game that I consider my ‘main’ project, Chipbot Battles, for about 4 months. In the next week, I was going to be moving house. I was stressed and had just a touch of burnout going on. On top of that, I was about to lose my internet for about two weeks (or so I thought) while the move was going on. So I did what I usually do when I’m stressed out: I created something.

It was a tiny little project, especially compared to the behemoth that Chipbot Battles was turning out to be. A simple idea with a simple execution. I wanted to take the timing and movement that a player needs to land a headshot in a FPS (like Counterstrike) and translate it into 2D with only two buttons being used. Headshot! is what came out of it.

The Game
Two players bounce vertically beside each other. They can ‘float’ and shoot. Floating essentially pauses the vertical momentum for a variable period of time, depending on how long the button is pressed (along with a max limit on the amount of float time). There’s a recharge period for both shooting and floating. So with two core gameplay mechanics fitting perfectly into two buttons, I had found what I was looking for. the dynamic was interesting, with all the timing, luck and skill of a true FPS boiled down into two simple buttons and the game came alive when I played it against other people.

So I decided, after prototyping the incredibly simple core version of the game, that for the period of my moving and for a small time thereafter, I’d focus solely on Headshot! and put Chipbot Battles aside until I had finished Headshot!

The Future
I worked on Headshot! day and night for the next 3 weeks (with my internet provider screwing up royally and me losing internet for somewhere around 4 weeks overall) and it quickly grew from the simple prototype into something that actually resembled a functional game.

As of right now, I have the core gameplay about 90% done, with a lot of little things around it that I need to implement properly (such as a true profiles system, the game settings, custom match settings and a lot of polish), and I’m still finding an actual artist for the game, so it no longer has my terrible programmer art, but the game is coalescing quickly. Hopefully I’ll be done before Christmas, but if not, it’ll be soon after that I finish it. I’m looking forward to seeing what people think of the game overall.

I give a brief explanation of the basics of working with vector art in GM, specifically the difficulties I encountered adding it to an existing project.

Two button deathmatch! Try to headshot your opponent while avoiding their attempts to headshot you. The more shots you miss, the bigger your head gets...