Albert (a ghost) is unaware of his own state of mortality, that is, until Mya (a lively young teenager) comes along to ruin his day with the news. Together they crave for answers as to how Albert had died and why his life was cut so short. The problem? The Mansion in which Albert had once occupied, which should hold key to the answers he desperately craves, is due to be renovated. Albert and Mya must work together to get the workers out of the mansion any way possible.

For the next Act in the story I wanted to add some investigation gameplay; give the player something more to do in order to progress the story rather than “Go here”. To help Albert regain his memories there will be moments where the player must find clues, which then must be pieced together. Here is an example:

At the moment it is in its early stages, but eventually you’ll be able to rotate objects to look for specific clues. I also need to add a piecing together section where you can link clues together to correctly reform a memory. In this example, it was just one clue so a simple cutscene is all that is needed.

In a previous article (Update 4) I discussed personality traits (fears and guards), which are basically the worker’s weaknesses (Fears) and strengths (Guards). Since then I have added quite a few more traits. In the example in the video below you can see the worker has an ignore trait (strength), which means they are unaffected by anything the player does. To combat this the player must target their fears (weaknesses) which breaks their ignore trait.

To help the player figure out how to scare the workers, they are given Soul Files, which help to paint a picture for each worker. The overview page (as seen below) gives the player a bit of information about them. 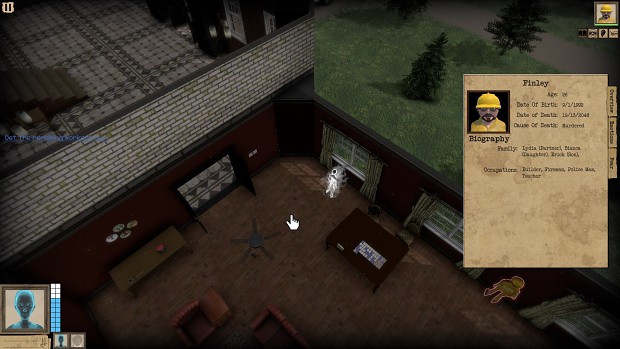 The fear page not only shows the worker's current fear level, but also their personality traits, as discussed above. The player can hover over each trait, which gives them more information about said trait. 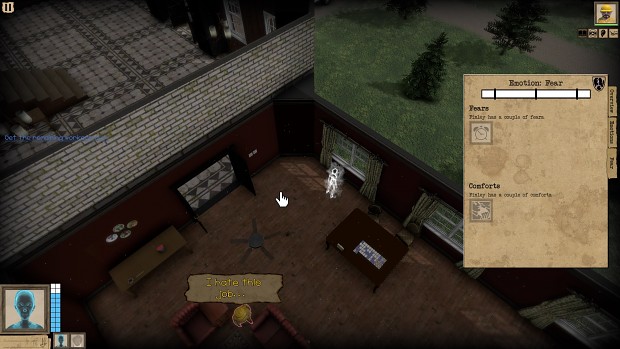 Hello again! For the past 6 months, I’ve been working to get the story content into the game as well as several gameplay improvements and more! I'll...

After quite a few play test sessions of Haunted Emotions I realised that the game was too simplistic. There was little to no thought process for the player...

A brief update that gives you an idea of what the story content will look like. An update on the gameplay will be coming soon along with a demo!

This update is a brief one that will focus on the “enemies” of the game, featuring the first type of enemy: The Workers, but more specifically their...

Thanks for the kind comment and thanks for watching Haunted Emotions! :)

Case and Bot: Murder in the Hotel Lisbon Point and Click