Hash Rush unites the worlds of cryptocurrency and real-time strategy gaming. For the first time ever, this combination allows gamers to compete for cryptocurrency and in-game rewards. An online sci-fi/fantasy single-player Real-Time Strategy game set in the fictional Hermeian galaxy; Hash Rush sees players build, fight, and trade their way to victory as they grow and manage their small mining colony, battle monsters and trade valuable items and resources. Tasked with accumulating the sought-after Crypto Crystals on their planet, successful players will earn themselves Ethereum as well as in-game items, bonuses and other prizes.

The Hash Rush Dev Blog is back, giving you insights into how we are developing the game. For this edition of the dev blog, we are going to look at how the game handles the blockchain (Rush Coin and Tokenised assets) based transactions.

To handle the cryptocurrency based transactions in Hash Rush, we teamed up with VZ Chains to develop a custom network called the ‘RUSH Network’.

VZ Chains are a blockchain development company that is passionate about the values that blockchain stands for; transparency, decentralisation and true privacy. While working with them, they have proven to be experts in the domain, and have the passion, drive and imagination to envision new and innovative solutions.

So without further ado, let’s get straight into exploring the RUSH Network!

What is the RUSH Network and why we need it

To understand why we need the RUSH Network, we have to look at the use cases of blockchain in Hash Rush and identify the problems that may come with it, all while considering our theme as an online RTS game.

Starting with our use case. Hash Rush will primarily use Blockchain for in-game asset trading. This means that we are going to be using RUSH Coin (RUSH) as our in-game currency, and we will be tokenising our in-game items. Using RUSH as our currency means that our players will use it to purchase items from our item shop and also from other players.

By identifying the use case(s), we now have to consider the problems that using Blockchain may give us. In our case, using Rush Coin as a currency and tokenising our items will present us with three major issues that need to be tackled.

These three points pose significant problems for Hash Rush as they do not exist in typical online games, and so should not exist in Hash Rush. This means that our solution has to speed up the transactions so that they are near-instant, remove the transaction fee (no matter how small it may be), and as far as possible remove the technical knowledge required from the player.

This is where the RUSH Network comes into play, as it solves these problems.

When looking at the RUSH Network, the first thing that needs to be understood is that Hash Rush and the RUSH Network will only manage a single cryptocurrency wallet and not a unique wallet per registered account. The RUSH Network then manages this wallet, alongside a traditional Oracle database that handles the in-game transactions and RUSH Coin balance for the players, and it is by using these two databases together that we are able to give our players the required high-quality experience. 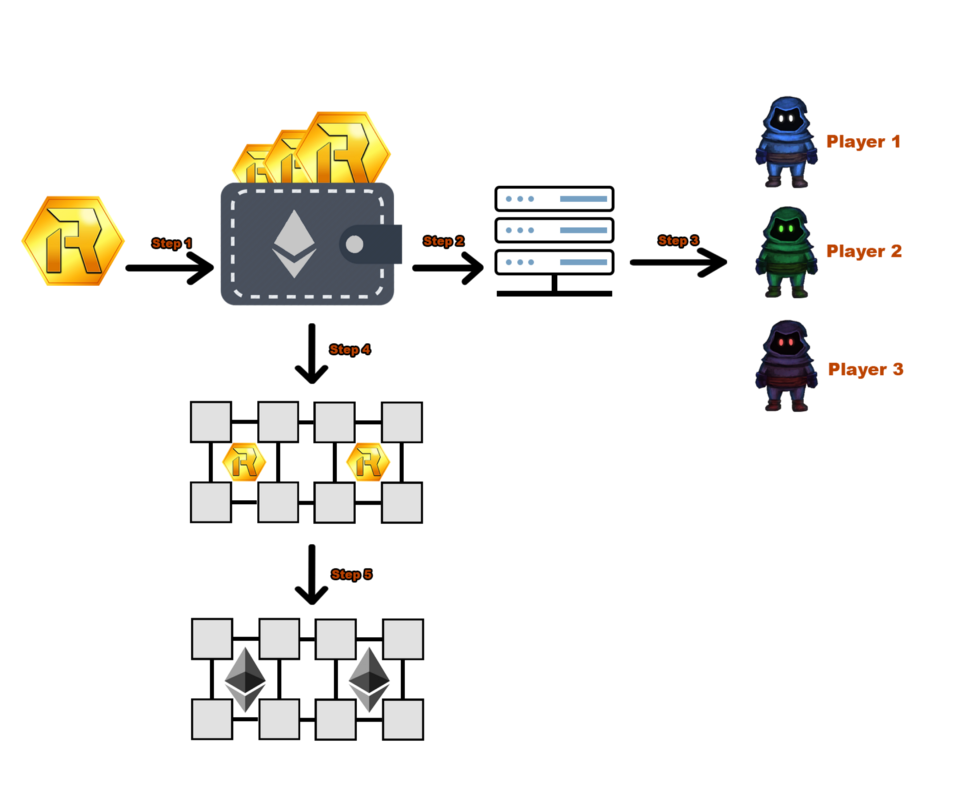 Let’s start by explaining the process of adding Rush Coin to a players account.

When a player first registers an account with Hash Rush they will need to provide us with their private Ethereum wallet address (public key); this address is then permanently linked to their game account. From that moment on, the RUSH Network will continuously be looking for Rush Coin transactions that originate from that wallet address. If a transaction is received, the RUSH Network will update the balance of the player that has the Ethereum wallet address connected to their account.

Looking at our image, topping up Rush Coin will involve:

Step 2
The RUSH Network detects the transaction (after the Blockchain has verified it) and notifies the Oracle database that Rush Coin has been received.

Step 3
Based on the address that sent the Rush Coin, the RUSH Network will know which player should have the Rush Coin made available to them; it will search for it and update the player’s balance.

If a transaction is made from a wallet that is not connected to any account in Hash Rush, the RUSH Network will decline the transaction, and it will bounce back to the original sender.

The next part of the RUSH Network to understand is how players can spend their Rush Coin. After a player tops up their RUSH Coin, until a purchase has been completed they no longer interact with the Blockchain, but instead the Oracle network. This means that all purchases and transactions can be completed instantly, with no transaction fee’s and do not require any cryptocurrency knowledge from the player. This is essentially how a typical online game handles the in-game currencies.

However, as we are making use of Blockchain, we can add some further steps (2 and 4 in our image) that create an open and transparent environment. Once the transaction has been handled by the Oracle database, the RUSH Network then temporarily holds the information and will write it in batches to the RUSH Coin sidechain. This means that all purchases and trades carried out in Hash Rush will be discoverable to anyone that wishes to check them out by using our Blockchain explorer. Ultimately this means that we are taking the best aspects of a centralised system and merging it with the best elements of a decentralised system.

At this point, we need to take a moment to explain what the Rush Coin sidechain is and how it works, as it is an integral part of the RUSH Network. Looking in our diagram, this covers step 4 and step 5.

The RUSH Network decentralised sidechain is a high performance, EVM compatible sidechain. The structure of the RUSH network sidechain consists of two levels of Sharded POS (proof of stake) Blockchains.

The first level of the RUSH Network sidechain is the parent chain that delivers data to each of the individual chains below it (childchains). On this level, the assets are held in different smart contracts representing the balance of each marketplace. In this case, a marketplace represents the project where the Rush Coin will be used. In the RUSH Network, Hash Rush is a marketplace. The integrity of the parent chain is enforced by the RC token. 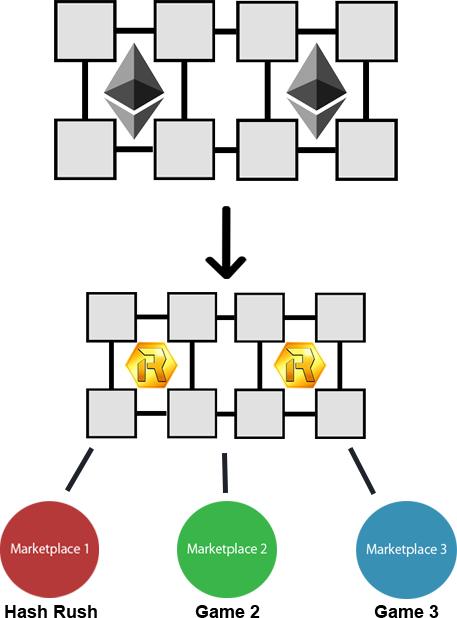 So, what does this tell us about the RUSH Network? Other than it being an incredible piece of Blockchain technology that allows us to bring Rush Coin and in-game digital assets to Hash Rush, it is also flexible enough to allow other projects and games, not just Hash Rush-related to be built into the Rush Coin ecosystem. If you are interested in the RUSH Network and using it with your project, then we recommend you to get in touch with VZ Chains directly.

Who knows, in the future, Rush Coin may be the number one gaming cryptocurrency for Blockchain based games, the infrastructure is certainly there!