Gundam RTS is a free RTS game. It uses the Spring game engine and is currently in production. I make periodic releases and the game is very playable. It focuses on the one year war story which means no super mechs or effeminate boys. Just anime style humanoid robots shooting each other A LOT.

As is customary, I have a monthly update for you guys! Scoring system, better survival mode, fixed webpage and more...

So this month has been terribly unproductive for gundam but a lot of what I have been doing has been visual. Well except for this weekend, this weekend I have been seriously coding away on new features.

So first things first, SMOTH.NET IS BACK UP! The forums were down or outright unstable for the past year. I have restored the forums to working order and better. I have NOT finished the gundam homepage because I was trying to get 1.27 out.

Secondly, I passed my first MCP exam. 3 more and I get a cool new professional title! WOO WOO!

Ok lets get to the good stuff.
Added new airport models!
been tweaking many of the unit textures, here is 1 example, the new rmv has already had it's texture finetuned!

- yes that is right, there is a timer now to tell you how long until the end game command ship!
- the new scoring system works as follows:
you get a kill, that gives you 10pts + basic cost * 2 + refined cost *2 + exotic cost *50
It does store kill count but I don't do anything with that yet. No worries Jools, you'll get your killboard!
* EDIT * WOOPS I forgot to mention I also enhanced the survival spawner. Now the spawns vary depending on difficulty level! so like at level very easy, you will not face any sniper MS :).

Continued work on the research system ui. I won't bore you with details but as you can see 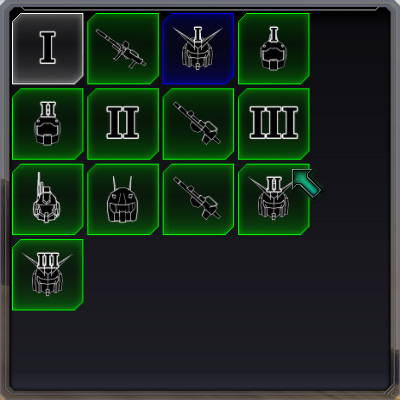 this is just showing that the code was doing something.
A white item has been researched.
green represents something that can be researched
red would represent something you cannot research(not shown)
blue is just a temporary thing showing the current item in research.

I do plan on a proper tree view but right now just having the buttons working and doing the behind the scenes stuff is enough for me.

Still working on the desert valley remake. if all goes well, this will be the new layout: 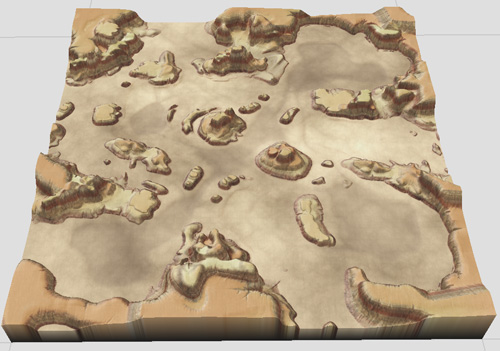 Well good luck with what you doing so far, the new desert valley map looks much better, looks like a 1v1 or ffa battle map. Also cant wait to try out the research.

I like the new options in mind but I would like to see the Zeon units amped up or new ones made because I literally have to send out legions of Zakus with elite units to take on the enemies elite gundam units. Then again Gundams are supposed to be a pain to kill but I never imagined I had to send out 23 Zakus to defeat just one!

Just to ask is there anything that stands up to a gundam in a one on one fight? I hate having to build up a large force just to counter-act a gundam and group of whatever it has with it. Not too mention I can't entirely ignore a Gundam if its at my base's door step. I like how you built the game but I feel the Zeon faction needs units that can actually put up a decent fight without having too much support. For example I did ignore the Gundams and let my hard to reach defences handle them while they just shot at the walls but enemy artillery units just take out the defences and I then have to use my own mobile suits to stall the gundams while under fire by enemy long range. So far I had to build up meatshield units to protect the forces that can take enemies out easily but it consumes too much resources and then it slows down production speed and I am eventually overwhelmed. Got any suggestions or new things in this update to fix that?

if you are suddenly facing gundams, like the rx78 and fa781 at the same time.. your enemy was left alone waaaaaaaay too long. For fending off late game '78 series using the zgok missiles can quickly neutralize an rx78. I have seen goufs paralyze and kill the nt1 many times.

if it is rx79s, beam rifles are a good counter, so gelgoogs.

You talk a lot about defenses which is concerning. Defensive structures are a bit difficult to understand. As zeon, you should be playing aggressive right out the gate. As a zeon player you should be hitting fast and hard. Blitz and guerrilla are your two main tactics.

I recommend playing federation if you are more defensive minded.