Golem is the first title from Highwire, an independent developer founded by industry veterans in Seattle. It is built from the ground up for PlayStation VR and features original music from Marty O’Donnell — award-winning composer of Halo and Destiny — and innovative VR controls developed by Jaime Griesemer — Game Designer on Halo, Destiny and Infamous Second Son.

In Golem, you play as an adventurous kid who has been seriously injured. You are stuck at home in your bed, dreaming of exploring the outside world.

You gradually develop the power to create and control stone creatures known as golems. You see through their eyes, direct their movements, and use them to explore beyond the confines of your room. At first, you can only build small doll-sized golems to send around your room...

... but eventually your powers will grow, until you can send enormous 15-foot tall giants to explore an ancient abandoned city.

Thanks for voting and helping Golem on it's quest to become the 2022 Indie of the Year. You are now in with a chance to score some free games. Help this game secure more votes by embedding the widget (or link) we have included below on your favorite sites.

We didn’t hear much about Highwire Games’ PlayStation VR-exclusive game, Golem, coming out of E3 – but some new footage has emerged that shows us some more of it in action. The footage was captured by Road To VR when the game was being shown off in March earlier this year at GDC.

Though much of the footage consists of first-person exploration that we’ve seen previously, toward the end we get a first look at Golem’s other key gameplay mode: giant golem duels. 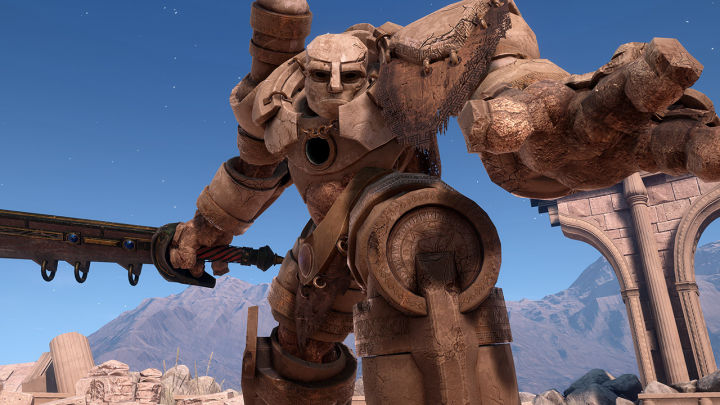 Battles appear to take place in a circular arena, and consist of using the PlayStation Move controller to alternate between blocking incoming sword swings and retaliating with your own. It’s interesting to see that only one Move controller is used; we’re not sure how movement around the arena and environments is accomplished just yet. And though the tracking on the sword swinging appears to suffer from a noticeable delay, we hope such issues can be ironed out before Golem’s currently undated release.