GODSWORN is a fantasy real time strategy game set during the Northern Crusades. Take control of a divine hero, gather worshippers, rally great armies of mortals and mythical creatures, and crush your enemies to prove you are worthy!

The wild pagan lands have been under the watchful eye of the gods for as long as time. The arrival of a knight order bearing the banner of heaven threatens to upset the uneasy alliance. Will the realm burn, or will blood of both divine and mortal be spilled to protect it?

Divine Heroes and Abilities - Master the various divine heroes, each with their own set of abilities. Heroes gain unique units and buildings in addition to the ones from their faction, making each of them have a unique playstyle. Protect your followers and burn your enemies with the light of the sun as the goddess Saule, or strike in the cover of darkness as the moon god Meness. Or join the order and smite the heathens as the archangel Michael.

Build and Be Worshipped - Devoted followers will flock to your shrine. Have them gather resources and build cities so you can raise great armies for battles to come. Protect them while they pray to grant you faith, a powerful resource used for mythical creatures and god powers.

Co-op Campaign - To unite the pagan tribes, take up arms on your own or with a friend in a campaign with optional co-op. The campaign follows the Baltic pagan struggle against the crusades. Can you bring unity to the feuding pagan gods before the armies of heaven arrive? Or will the land be torn asunder for your pride?

Or visit our site for more information: Thunderoakinteractive.com

Before any concepting is done we start with creating a mock-up in engine with primitives and odd props. This allows us to get a general feeling for the unit we are designing and allows us to play test with the units before any actual art is created. 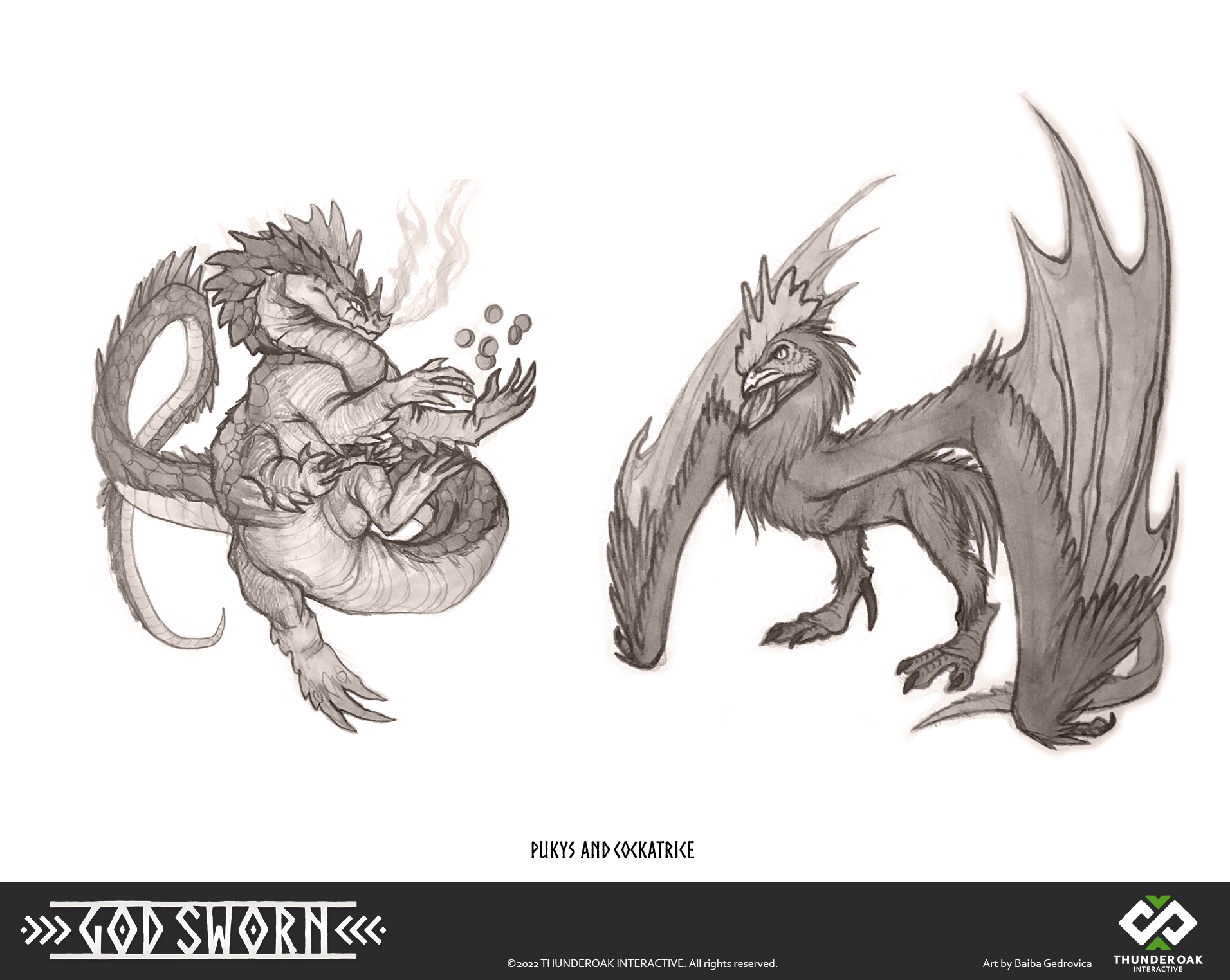 After we agree the unit is ready to get an art pass we start making the first sketches on paper. We quickly iterate through a couple of options and then start taking it into the digital format were we line them up next to other concepts. This allows us to make a consistent line-up and improve any overlap in unit read. 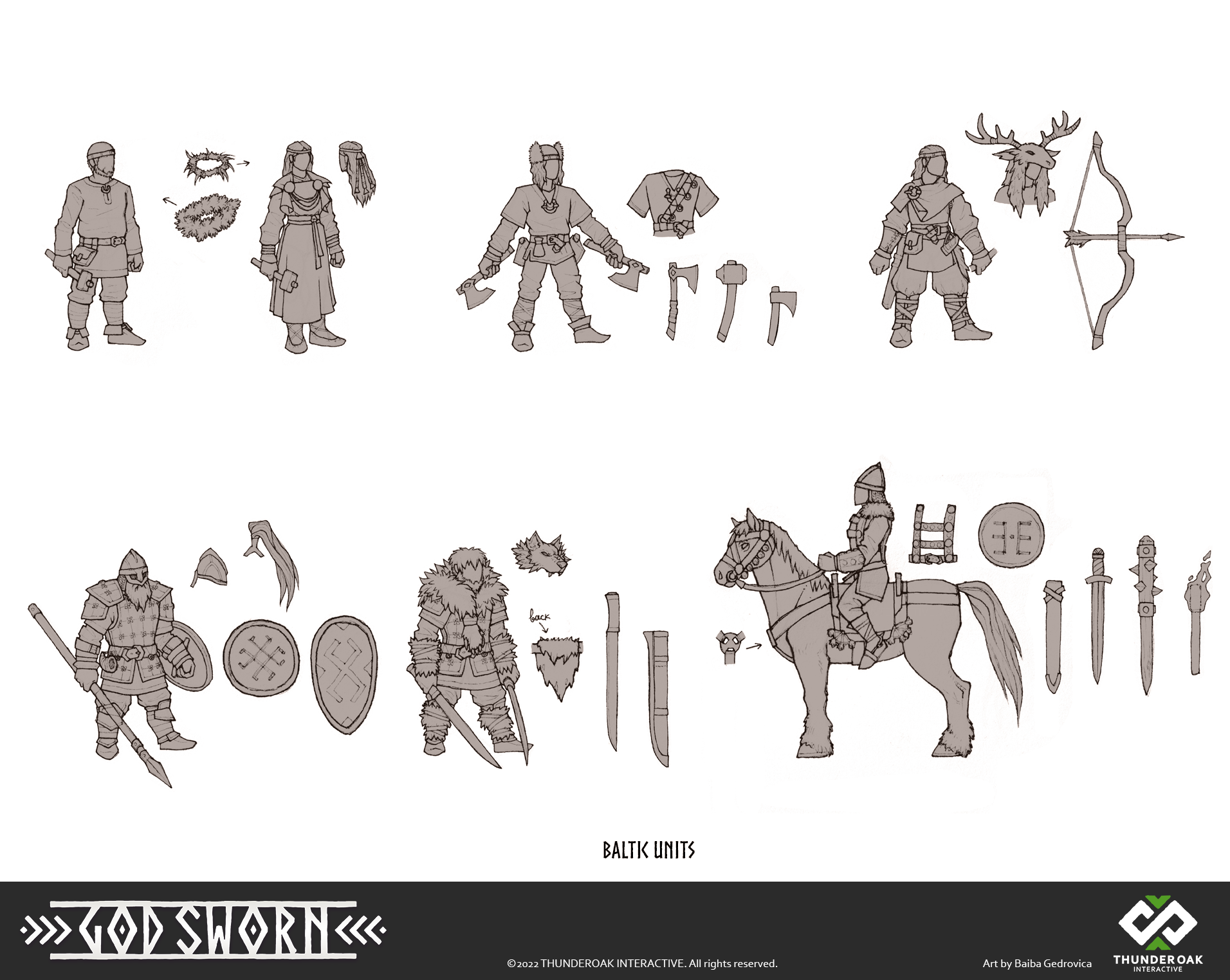 Close observers will notice some differences between the concepts and revealed in-game versions. Often publicly shown game concept art is reverse-engineered, but we wanted to show you how these things actually evolve through iteration. The most noticeable one is probably among the Baltic units - the weapons of some of the infantry were swapped around after some more play testing and discussion on how the unit reads. 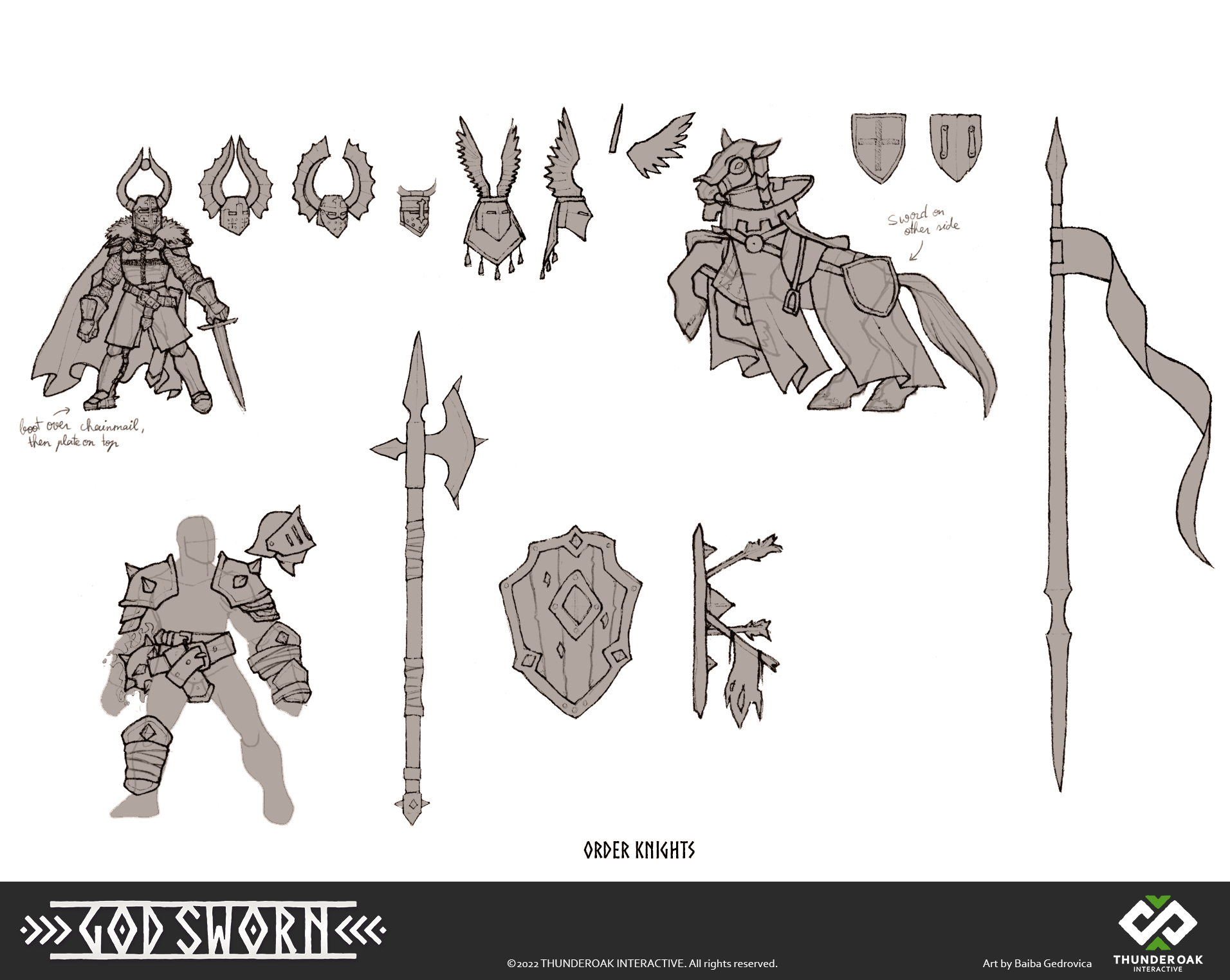 Or visit our site for more information: Thunderoakinteractive.com

We are announcing a new fantasy RTS game! Godsworn is a classic real time strategy game set during the Northern Crusades, where pagan gods and their tribes...