Goblin Dungeon is a fantasy rogue-lite currently under development. It's a coffee-break RPG featuring scenarios that consist of five dungeon levels of increasing difficulty, culminating with a showdown with a boss monster. The player controls a party of four brave adventurers from different character classes, offering various ways of completing levels. Characters gain Xp and spend them on stat and skill upgrades, such as spell unlocks. Vanquished enemies leave behind loot such as weapons and armour that greatly increase the heroes' chances of survival.

The game is played out in real time, but a turn-based mode is under consideration. Cooperative multiplayer is a possibility in the future.

A beta version of Goblin Dungeon is available for download now.

Please send all feedback to goblindungeon@gmail.com.

I've now fleshed out some of the skills for the Druid hero character. The main skill the druid possesses is Metamorphosis - the ability to transform himself into other creatures for a short period. That whole mechanic is mostly complete; the caster temporarily gains the stats and skills of the target creature (except for mana), and of course their unit sprite changes accordingly. There are a few little details still to do, like locking out access to the inventory while transformed.

The Druid will be able to unlock several versions of the spell for different target creatures, but starts with Metamorph: Giant Spider.

The other starting spell for the Druid is Summon Animals, which is really a variant of the Summon Undead spell of the Necromancer. As the Druid levels up the spell, the animals will get more numerous and/or powerful. 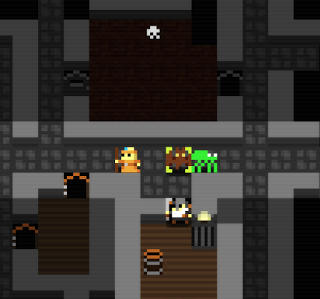 Implementation of some of the UI work for the shop, where characters and more can be unlocked with coins earned from previous dungeoneering.

I've done some work on improving the user interface, giving the left and right panels a stone effect and some giving everything some nice borders.

Is this a ROTMG spin-off? The characters are just the same

The sprites were originally created by David Williamson for Hack, Slash, Loot, and now available through Onyx Design Labs.